'Sir Arthur Conan Doyle's The Lost World' - the Television Series Content from the guide to life, the universe and everything 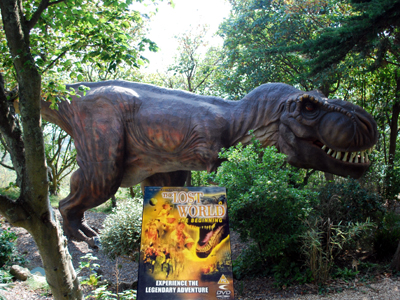 Sir Arthur Conan Doyle's The Lost World (1999-2002) is an entertaining television series loosely based on the novel by Sir Arthur Conan Doyle. A Canadian/Australian co-production, it lasted for three series. Made soon after The Lost World: Jurassic Park (1997), it was timed to exploit the then current interest in dinosaurs but incorporated lost civilisations, ghosts and demons as well as prehistoric animals.

Shortly after the Great War a group of explorers led by Professor George Challenger travel to South America, where a 'lost world' populated by dinosaurs is rumoured to exist. After the destruction of their hot air balloon they are stranded on top of a plateau, but are befriended by a wild jungle girl called Veronica Layton, who has lived alone in a treehouse there since her parents disappeared 11 years earlier. Over the next few years they encounter the weird, wonderful and wild inhabitants of the plateau while searching for a way home.

The Lost World featured six main characters played by an international cast, with an additional recurring character appearing halfway through the final series. None of the recurring female characters appeared in the original novel.

The leader of the expedition who hopes to prove the existence of living dinosaurs, Challenger is a brilliant scientist. He spends most of his time either studying the plateau's wildlife in great detail or inventing gizmos that cause as many problems as they solve. Actor Peter McCauley is from New Zealand.

Lord Roxton is a nobleman who grew up around the stone circles of Avebury and served as a Major during the Great War. He is haunted by a hunting accident in which he accidentally shot his older brother; while his brother was being attacked by an ape he fired a bullet that killed them both. Roxton has passionate feelings for Marguerite Krux and feels responsible for the other members of the expedition's survival. Roxton was played by Australian actor William Snow.

The wealthy widow who finances the expedition, Marguerite at first glance appears selfish and motivated only by money, but she has a secret past. It is later revealed that she grew up not knowing who her parents were or her true identity, but like Roxton she lived in Avebury's stone circle. She has a mysterious birthmark that supposedly implies she is the reincarnation of a druid priestess. Marguerite, played by Australian actress Rachel Blakely, is a new character for this television series and did not appear in the original novel.

The sole surviving member of a previous expedition to the plateau. She has lived alone for almost 11 years, although as a little girl she was helped by Amazon warrior women and a nearby tribe of villagers. Her parents disappeared under mysterious circumstances. She has thoroughly adapted to life in the hot jungle largely by being unrestricted by excessive clothing, carrying knives and swinging through vines. She lives in a treehouse which she shares with the other members of the expedition. Although she has feelings for Malone, her priority is discovering what happened to her parents. Their disappearance seems to be tied to a strange spiral-in-a-triangle emblem that is supposedly the symbol of the plateau's protector. She is played by American actress Jennifer O'Dell, who did not appear in seven episodes of the third series in order to appear in other productions.

Played by William deVry in the pilot but by David Orth in the series, Malone is an American journalist famous for his reports on the Great War. He goes on the expedition in order to impress his fiancée Gladys but develops a close relationship with Veronica. Malone appears sporadically in only eight episodes in the third series, in which he dies, is occasionally a ghost, is resurrected but is strangely arrogant and finally wanders off. Both David Orth and William deVry are Canadian.

The oldest member of the expedition, the frail but caring Summerlee accompanied Challenger with the aim of disproving the existence of living dinosaurs. Despite admitting his error, he still often disagrees with Challenger, but respects him nonetheless. Summerlee appears in series one, at the end of which he is apparently killed by a native and falls down a waterfall, yet no trace of his body is ever found. British actor Michael Sinelnikoff had also played Summerlee in the unrelated 1998 version of The Lost World.

A regular character in only the last eight episodes who is introduced when Challenger's attempt to beam the explorers to London results in their time-travelling instead. Finn comes from 2033, 18 years after an apocalyptic nuclear war started by a demon called Zoth wiped out all mankind outside the plateau. The plateau has been discovered and named New Amazonia, but is ruled by slavers. As her family and friends have all been killed, Finn accompanies the expedition back to the 1920s, hoping to change the course of the future. She was played by Australian actress Lara Cox.

The explorers live in safety in a large two-storey treehouse, located at the exact centre of the plateau. This consists of sleeping quarters for each member of the expedition, a large living space, a scientific laboratory and a bathroom that is equipped with a working heated shower. It is accessible from ground level by a lift and has water piped in from a nearby river and electricity generated from a windmill Challenger built on a nearby hill. The area surrounding the bottom of the treehouse is defended by a fence that is electrified, except for a small gate that is secured by a small latch. It is also implied that this area is used to grow crops and herbs, although they are not seen.

The treehouse's only weakness is its vulnerability to fire. It is also unclear exactly how far from the ground the main living area actually is; in one episode ape-men have no difficulty in climbing to it within seconds, yet in another a huge giant takes ages to climb up that high.

The predominant prehistoric lifeforms seen in the series are:

The show, produced by Australian company Coote/Hayes Productions and Canada's Telescene Film Group, began with a 90-minute pilot episode that cost $4 million to make. This led to the series being commissioned, albeit with a different actor playing Malone, with the pilot split into a two-part adventure that introduced the series. Another 64 45-minute episodes were made in three series, each containing 22 episodes, between 1999 and 2002.

The main set, the treehouse, was filmed at the Warner Movie World Studios south of Brisbane on Australia's Gold Coast. All the exterior locations were filmed within 30km of the studio. The most popular location was a rainforest where the bottom of the treehouse was set, while a nearby dairy farm was the site of the windmill and many other locations.

Before production on the third series was underway Telescene Film Group had filed for bankruptcy. A group of elderly investors quickly formed a company called the Over The Hill Gang that raised enough money to finance the third series, but this resulted in a smaller budget which meant a much smaller cast. The characters of Malone and Veronica were written out for several episodes for financial reasons, and replaced by a new character played by an Australian actress. For the Australian-filmed series to qualify for tax incentives, the production needed a predominantly Australian main cast. When Malone did appear, David Orth was classed as a 'special guest star'.

During production of series three, a renewal deal with New Line Television was signed. This stated that as long as they were able to finance a fourth series, New Line would broadcast it in America. Anticipating that this would go ahead, the writers ended the last episode with a cliffhanger, only for the expected funding from a distributor to fall through when they were unable to secure the rights to the existing 66 episodes. The cliffhanger was never resolved.

Husband and wife writing team Judith and Garfield Reeves-Stevens would go on to produce Primeval: New World. This series had numerous similarities with The Lost World. Both involved dinosaurs, both series ended on an unresolved cliffhanger involving the appearance of numerous time distortion anomalies, and in both a character travels back in time through one of these anomalies only to be attacked and killed by a dinosaur, an event that inspires the key scientist character to investigate the dinosaurs in the first place.

The Lost World is without doubt cheesier than Cheddar Gorge and the dinosaur computer effects have dated badly, especially when compared with other programmes made at the time such as Walking With Dinosaurs. Yet the series recognises its limitations and is determined to enjoy itself regardless.

A typical episode sets up the story in the pre-credit sequence, informing viewers what bizarre creatures/unusual tribe have put one of the expedition in deadly peril this week, while the remaining time is spent by the remaining members working out how to come to the rescue. Many episodes involved two different storylines, in which half the expedition are jeopardised by one thing while the remainder are endangered by something else, and the whole cast is only assembled at the very end when the threats are neutralised.

The Lost World's landscape is littered with unexplored caves, which contain traps, dinosaurs, aliens and Jack the Ripper; it also never ceases to surprise how so many conflicting civilisations live within easy commuting distance of the heroes' treehouse. Each of these civilisations vanishes never to be seen again after the episode in which they appear. There are also contradictions within the series; in series two it is implied that Veronica's parents may have gone to El Dorado but by series three this mysterious location is known as Avalon instead.

One of the challenges that the series faced was the plethora of other adaptations of The Lost World made around the same time. In 1992 a two-part adventure, The Lost World and Return to the Lost World had been made. In 1998 a poor mockbuster, which also featured Michael Sinelnikoff as Professor Leo Summerlee, attempted to cash-in on the success of blockbuster film Jurassic Park: The Lost World. A more serious rival was the 2001 BBC version of The Lost World starring Bob Hoskins, Peter Falk and James Fox as well as the breath-taking special effects pioneered for Walking with Dinosaurs. It was apparent that the series was unable to match the quality of this adaptation.

Yet despite this, The Lost World is highly enjoyable, light-hearted entertainment.