'Star Trek' - The Transporter Content from the guide to life, the universe and everything

This entry is for reference purposes only. The Star Trek name, fictional characters and all references to the Transporter remain the copyright of CBS Paramount Television. 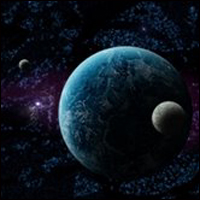 They work just fine, thank you.
– Michael Okuda, Star Trek technical adviser's answer to the question: 'How do the Heisenberg compensators1 actually work?'

Long before there were mobile phones, families who couldn't afford to have their own landline installed had no choice but to trek out in all weathers to find a public phonebox. It was Murphy's law that you couldn't find one in working order during an emergency, or that the only one that hadn't been vandalised had just been used as a makeshift toilet.

During the 1960s, one far-sighted science fiction writer called Gene Roddenberry gave his characters in Star Trek a hand-held device for communicating with their starship and each other. Whether the idea for today's mobile phones came from this original concept matters not; the fact is that flip-top mobiles are remarkably similar to the original series' communication devices.

Another idea of Roddenberry's was the matter transporter: a 'matter-energy conversion device used to provide a convenient method of transportation'. It was thought up because the show's producers couldn't or didn't want to land the starship on a different planet each week. The Transporter let them get on with the rest of the plot much faster, and without monopolising the special effects budget.

It's a simple enough device, based on trust. Someone stands on the transporter pad and, upon the command Energize!, the Transporter Chief operates the controls. Molecules scatter and rematerialisation takes place at the destination, hopefully in the correct order with the subject completely compos mentis. Physicists speculate that it doesn't actually transport but rather makes a perfect copy, with the original being destroyed to create the illusion of transportation – something to do with quantum duality.

A landing pad isn't required; subjects can be beamed straight onto a planet's surface or even inside a building. The reverse journey originally required the use of portable bands known as armlets or bracelets, which the Transporter Chief would 'lock on to'. Loss of the bracelet meant almost certain death, or a fate worse than death, such as spending the rest of your life mining salt on some godforsaken desolate moon. The use of these armlets was played down in later series - perhaps the later transporters were more advanced and didn't need them.

The Transporter has a built-in virus scanner - infected people are transported but the viruses are not. Smuggled weapons are disarmed. It has saved multiple lives in hazardous situations, and indeed (in Star Trek IV) it saves the Earth itself: in the 23rd Century an alien probe, which can only recognise whalesong, attempts to contact Earth's whales, and in doing so disables all Earth's technological systems. Unfortunately all Earth's whales are extinct by that century thanks to whaling. The outlook is extremely grim. In the end, two humpback whales from 1986 are beamed aboard a Klingon 'Bird-of-Prey' spaceship for the journey to the human future.

The Transporter is also used to get rid of troublesome terrors like Tribbles, alien creatures resembling a ball of fluff which make a pleasant purring sound. Unfortunately they are born pregnant and soon take up any available spare space. Once they had invaded the Enterprise and even commandeered the captain's chair, Kirk ordered them off the ship. The Transporter Chief beamed them across to a departing vessel belonging to the Klingons, who hate Tribbles more than humans. Such a method of disposal would no doubt come in handy for the residents of Australia. In one fell swoop they could solve their Cane Toad problem by trading them with the Ferengi, who no doubt would consider them a delicacy.

Should the traveller have failed to materialise, or one of the away team was wearing a red top2 or something else untoward occurred during the journey, an investigation into what went wrong would be conducted. Hopefully lessons would be learned and new safeguards put into place to prevent a recurrence.

A certain amount of distrust in the Transporter was displayed by Doctor Leonard 'Bones' McCoy, who preferred a more conventional means of getting around, and often took a shuttlecraft if he could. McCoy had no doubt seen many horrific results of Transporter malfunctions during the course of his vocation.

Some of the mishaps which occurred during the different series of the Trek genre were the stuff of nightmares. A few famous Transporter 'incidents' are catalogued here:

So far, this way of beaming oneself around the planet remains well within the realm of fiction; perhaps just as well. But the subject is being discussed and tested. This is where we come down to the nitty gritty: travelling around is a pain, whether you're going from home to work or visiting relatives and friends. The increasingly gridlocked roads are full of bad drivers and there are graphic TV news reports of plane crashes to scare you witless. If such a transporting device were invented, someone would have to test it. Would you develop 'Transporter phobia' (a recognised medical condition in the Trek universe), or be prepared to try it out?

I don't think I'd want to be resolved into particles, or waves or whatever, and put together somewhere else. The chance of getting it wrong is too high!
– An h2g2 Researcher

1A technological device that's never explained and just exists to get on with the story. Technobabble, fans call it.2This usually meant the character didn't survive the episode.