The Atomium, Brussels, Belgium Content from the guide to life, the universe and everything 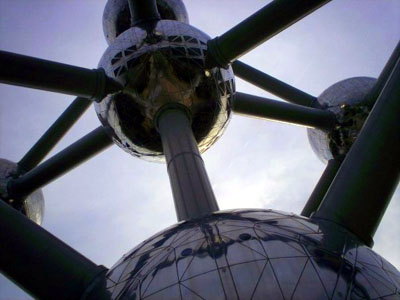 The Atomium is a giant steel structure in a northwestern suburb of Brussels, Belgium. It could be considered to be a model, a building or a sculpture, and looks like an elegant collection of nine silvery spheres joined by rods. It was built in the 1950s for Expo 58, the World Fair of Brussels, an exhibition of post-war science and progress. Designed by architect André Waterkeyn, it has become a symbol of Brussels1. It is in the shape of an iron crystal: the spheres represent iron atoms and the rods are the bonds between them.

The Atomium is open to the public. The rods joining the spheres are hollow tubes containing stairs, escalators or a lift (elevator), so that visitors can move around inside the structure. Normal admission provides access to four of the nine spheres, including the top sphere with its panoramic views over the city. People with limited mobility can visit three of the spheres including the top sphere using the lift. 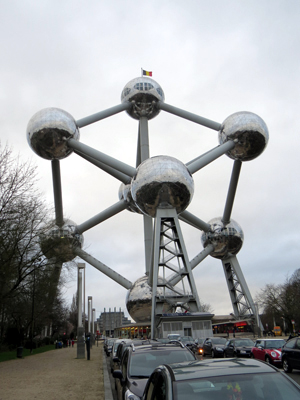 The structure is in the general category of 'bigger than it looks'. It is 102m (335 feet) in height and each of the spheres is as big as a house, with two floors inside. For comparison, the Statue of Liberty is 91m high including the pedestal; the Spire of Dublin is 120m, while the tallest known tree, Hyperion - a coastal redwood in California - is 116m. On the other hand, structures and buildings such as the Eiffel Tower (300m), Empire State Building (381m) and Burj Khalifa (830m) are much bigger.

The shape of the Atomium is a cube with a sphere at each of the eight corners, and a ninth sphere at the centre. The arrangement is known as 'body-centred cubic' and is the atomic structure of iron - in a crystal of iron this structure is repeated millions of times. The cubical nature of the Atomium is not immediately obvious, however, because the cube is tilted. One of its corner spheres is at the bottom, just above ground level, and the diagonally opposite corner sphere is directly above it, so that the main diagonal goes straight up from ground to the top of the structure. Three of the corner spheres are therefore one third of the way to the top, the other three corner spheres are two thirds of the way up, and the central sphere is at the half-way point on the main vertical axis, between the bottom sphere and the top sphere. This is easy to understand when you look at it, although difficult to describe.

There are also three supporting pillars which are not part of the model of the iron crystal, but are needed to support the weight of the structure. These are described as 'bipods', and are not accessible to the public except in the event of an emergency - they have escape staircases in them.

The lowest sphere is not at ground level but slightly above it. There is a low, circular pavilion on the ground below the lowest sphere. This acts as a queuing area for visitors as well as holding a gift shop.

The whole thing is polished steel on the outside so it all looks very shiny and reflects the sky and the trees of the park around its base. When it was first built, it was faced with aluminium - the name 'Atomium' itself seems to have been inspired by the word 'atom' (atomic power was seen as the new future) and the 'aluminium' used to coat the structure, even though the crystal depicted is not aluminium2 but iron.

After the exhibition for which it was built was over, the area around its base was cleared and turned into a park, but the Atomium remained as a tourist attraction. Gradually over the years it became very dilapidated. The aluminium surface of the spheres became a dull grey. The windows became smeared and scratched and it was no longer possible to see out clearly. The exhibition inside the structure, about the peaceful uses of atomic energy, became very dated-looking and boring. By 1980, the Atomium was the sort of place that was worth going to see from the outside but not worth going into.

The structure was refurbished in 2004-2006. The aluminium coating was replaced with stainless steel, which should remain shiny for a long time and is more in keeping with the shape, since steel is almost pure iron. This also added about 100 tonnes to the weight of the structure, since steel is considerably heavier than aluminium.

The Atomium looked futuristic and forward-looking when it was created. Now it looks 'retro', or to be more accurate 'retrofuturistic'. This is the style that people in the past thought the future would look like. In keeping with this retro look, the exhibition inside is now about the Expo 58 Exhibition. It shows the wonderful new vision of the future that the people of the 1950s had now that the twin monsters of the Second World War and an Atomic Cataclysm had in their eyes been put to rest. 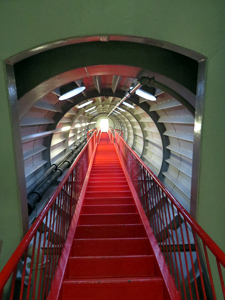 The Atomium is open every day of the year. It is a five-minute walk from the Heysel/Heizel metro station on line 6. In August 2016, the adult admission price was €12, with reductions for students, senior citizens, children and accompanying teachers. People with disabilities and very young children are free. Full details are at the Atomium Website.

The current tour visits four of the spheres and passes briefly through a fifth:

The Kids' World sphere that the tour passes quickly through is full of brightly coloured spherical pods known as 'raindrops'. These each contain three or four beds. School groups can stay the night here by arrangement.

1The Manneken Pis is the other symbol of the city.2Aluminium has a crystalline structure which is face-centred cubic rather than body-centred cubic. This would require 14 spheres to represent.