'Dad's Army' - The Characters Content from the guide to life, the universe and everything 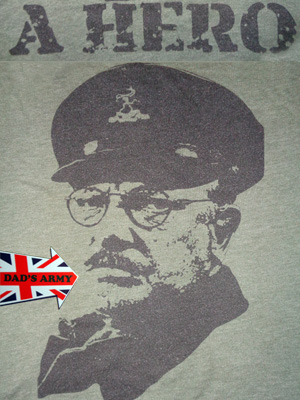 Dad's Army is often regarded as one of Britain's finest television sitcoms. With 80 BBC episodes and a feature film made between 1968 and 1977, the series told of the often-incompetent exploits of the Walmington-on-Sea division of the Home Guard.

Captain Mainwaring is a small, pompous man who believes utterly in his own importance. With a middle-class background, he is deeply resentful of the privileges enjoyed by the upper class. However, this does not stop him from looking down on those he considers his social inferiors, such as Hodges.

Mainwaring considers himself the perfect leader and resents any challenge to his authority. He appointed himself the captain of the Walmington-on-Sea branch of the Home Guard, despite not having any wartime army experience. Although he was brave and willing to do his part, his poor eyesight meant he was unfit for active service during the Great War. Ironically, at home he is a hen-pecked husband, dominated by his unseen wife, Elizabeth. His surname is pronounced 'Mannering'.

Arthur Lowe (1915-1982) before the war worked in the Fairey Aviation Company's factory until he applied for the Royal Navy, but was rejected on account of his eyesight. He joined the Army instead, serving in the Duke of Lancaster's Own Yeomanry in the Middle East as a sergeant-major. He only began his acting career in 1946. His principal passions were his steam yacht Amazon and horses. His wife, Joan Cooper, played Godfrey's sister Dolly in later episodes of the series. Tragically, Lowe died following a stroke in Birmingham's Alexandra Theatre's dressing room while on tour with Home at Seven. A statue of him was unveiled in Thetford in 2010.

Most sergeants are portrayed as loud, abrasive and bellowing - Sergeant Wilson could not be further from the stereotype. Genteel, gentle and very much a gentleman, Wilson has the upper class background that Mainwaring envies.

A soft-spoken ladies' man, less formal in appearance than Captain Mainwaring, often appearing with his sleeves or top button undone. Wilson has been extremely close to Mavis Pike and her 16-year-old son Frank for over 17 years, with Pike calling him 'Uncle Arthur'.

John Le Mesurier (1912-1983) may have had a promising cricket career had he not been fascinated in his teens by the theatre instead. During the war he was an air raid warden before serving as a captain in the Royal Tank Regiment in India. He appeared in a vast number of films, including I'm All Right Jack and The Pink Panther, as well as playing The Wise Old Bird in the radio series of The Hitchhikers Guide to the Galaxy. His second wife was Carry On actress Hattie Jacques.

The oldest member of the platoon, Lance-Corporal Jones is perhaps the most eager to serve. He volunteers for any role that arises, regardless of whether or not he is physically capable of actually doing it. At any opportunity he will describe how, as a young man, he fought under Kitchener in the Sudan against those he calls 'Fuzzy Wuzzies', with each anecdote more long-winded and irrelevant than the last.

Due to his age he is usually a second or so slower at doing anything than everyone else. When upset he also gets very frantic, shouting 'Don't Panic! Don't panic!' while doing that exactly. He is also perhaps a bit too fond of using a bayonet.

As the town's butcher, he has a large van that is used as the platoon's primary means of transport. He is also known to slip local widow Mrs Fox a sneaky sausage off the ration book as well as keeping the best bits of meat for his friends.

Clive Dunn (1920-2012) came from a theatrical family. During the war he was a prisoner of war after being captured by the Germans in Greece. After the war ended he took up acting, specialising in playing old men. He later had a number one hit record with 'Grandad' in 1971.

The youngest member of the platoon and the only one too young for active service, Pike is a young lad who sees life as being similar to the films he has seen. Constantly being fussed over by his mother who insists he wears his scarf at all times, his naivety is not always appreciated by Captain Mainwaring, who frequently calls him a 'stupid boy' both at work and in the Home Guard.

Pike is perhaps the unluckiest member of the platoon and is the one most likely to fall into rivers and/or get covered in mud, despite his mother's fussing. Pike has grown up close to Wilson, calling him 'Uncle Arthur'. Wilson also enjoys spending time with Pike, often accompanying him to the cinema.

Jimmy Perry, the man who created the concept behind Dad's Army, had joined the Home Guard in Barnes when he was 16, despite his mother always being worried about him catching cold through being out at night. The character of Pike was loosely based on his own experiences as a young lad too young to enlist.

This dour Scotsman was by far the most likely to grumble and complain, always willing to think the worst about anyone. He had once been in the navy before finding a civilian role as Walmington-on-Sea's undertaker.

John Laurie (1897-1980) served during the Great War in the Honourable Artillery Company until being invalided out and serving as a Sergeant-at-Arms at the Tower of London. During the Second World War he was the only member of the principal cast to serve in the Home Guard. Laurie was a highly-regarded Shakespearean and classical actor.

Godfrey is the platoon's medic who refuses to carry a rifle. A conscientious objector during the Great War, he nevertheless received a commendation for bravery for aiding those in danger. Godfrey, a frail man who lives in a little cottage with his two unmarried sisters Cissy and Dotty, has the least bladder control of the platoon, often being caught short at inconvenient moments.

Arnold Ridley (1896-1984) served at the Battle of the Somme in the Somerset Light Infantry during the Great War, before being invalided out in 1917 after suffering severe injuries, including shrapnel embedded in his body and injuries to his left hand and fingers. These injuries forced him to give up acting in 1921 and he became an established playwright, with play The Ghost Train being incredibly successful, and has been filmed several times. During the Second World War he served in France with the rank of Major, until his Great War injuries were discovered. He almost lost the use of his right arm in 1952 but experimental surgery successfully saved it. As he found carrying the rifle difficult due to his injuries, in later series of Dad's Army he carried a first aid kit instead1.

Walker is the only member of the platoon of serving age. However, he was considered unfit to join the services due to his corned beef allergy. A Londoner, Walker acquires and provides items on the black market. He rarely takes anything seriously and so often jokingly mocks Mainwaring's ideas. He is perhaps closest to Frazer, who he affectionately nicknames 'Taffy', who often undermines Mainwaring. He enjoys being the only young man around, frequently flirting with Walmington's young women, offering them the chance to buy genuine knicker elastic and other exotic otherwise unavailable goods.

James Beck (1929-1973) served as a PT instructor during the war. Tragically, Beck died unexpectedly in August 1973, halfway through the series.

As well as the seven stars, there were a number of characters who appeared in numerous episodes.

Appearing in 60 episodes and the film, Hodges is the head of the local ARP (Air Raid Precautions). It is his job to ensure that no lights can be seen by enemy bombers at night, and to minimise damage caused by a raid. This often brings him into conflict with the Home Guard, especially Captain Mainwaring, whom he calls 'Napoleon', and the platoon as a whole, who he considers to be hooligans. Pike usually responds to Hodges' disagreeable nature by imploring Mainwaring to shoot him.

Mrs Pike, whose first name is Mavis, is the mother of Frank Pike. Played by Janet Davies, she appears in 30 episodes, always mollycoddling her son. She is also visibly fond of Sergeant Wilson, keeping his ration book and inviting him round for meals. Inexplicably, she was played by Liz Fraser in the 1971 film, the only character in the film not played by the original cast.

Second-in-charge of the church hall, he strongly distrusts Captain Mainwaring and often sides with Hodges in keeping an eye on what the platoon are up to. He also is the captain of the local sea scouts. He has an almost sycophantic relationship with the vicar.

The effeminate vicar who reluctantly agrees to share the church hall with Captain Mainwaring, allowing him to use it and his office as his headquarters. Frank Williams was a lay preacher in real life and an active member of the Actors Church Union. Frank Williams still plays the vicar in the 2016 Dad's Army remake.

A now-retired former Colonel during the Great War who insists on being called 'Colonel'. He was first seen enlisting as a Corporal in Mainwaring's platoon, when he was known as Corporal Colonel Square. He later became the captain of neighbouring town Eastgate's Home Guard platoon and is known as Captain Colonel Square2. Mainwaring's bitter rival, Square looks down on Mainwaring not only for his middle-class background but also because he did not serve during the Great War, considering him a mere civilian playing soldiers.

A sheep farmer by trade. The main cast represented Walmington-on-Sea company's Number 1 platoon, Private Sponge essentially represented everyone else. Though most often seen loitering in the background he occasionally comes to the fore.

Local journalist and photographer, Private Cheeseman is a Welshman who joined the platoon following the death of James Beck who played Walker, although the character had briefly appeared before.

Captain Mainwaring's superior and in charge of the region's Home Guard companies.

The oldest man in the town not a member of the Home Guard platoon. Harold Bennett would later play the Young Mr Grace in Are You Being Served?, another series co-created by David Croft, along with Jeremy Lloyd.

A well-endowed widow that Jones is particularly fond of. The very last episode has Jones and Mrs Fox getting married.

Possibly the only man in Walmington-on-Sea even more pompous than Captain Mainwaring. Despite being old and bald, he spends much of his time chasing women, particularly Mrs Fox, who he wishes to see playing Lady Godiva and wearing only 'fleshings'.

Initially known as Edith, Shirley is Walker's girlfriend and works as a cinema usherette. Wendy Richard would later star as Miss Brahms in Are You Being Served?.

Michael Knowles played a Captain in six episodes and the Dad's Army film. Following his convincing performance he was given the recurring role of Captain Ashwood in It Ain't Half Hot Mum. Like Dad's Army, this was a television series created by Jimmy Perry and David Croft.

Michael Knowles wrote episodes of Dad's Army's radio adaptation, as well as the radio sequel series, It Sticks Out Half a Mile. 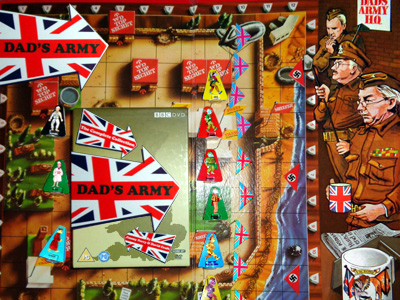 We are the boys who will stop your little game.

Dad's Army
Characters | The 1971 Film
1Although the closing credits, filmed during series 3, continued to show him holding a rifle.2Particularly in the radio series.