'Are You Being Served?' - The TV series Content from the guide to life, the universe and everything 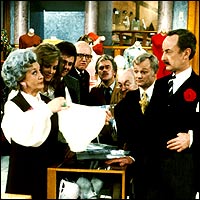 The British television sitcom Are You Being Served? was broadcast on BBC One between 1972 and 1985. The show was created by Jeremy Lloyd, and David Croft then became the co-writer and producer. David Croft also wrote Come Back, Mrs Noah and co-created Dad's Army and Hi-De-Hi. Jeremy Lloyd also wrote 'Allo, 'Allo!.

Are You Being Served? was about the Ladieswear and Menswear departments in the fictional department store Grace Brothers in London. The original staff was Captain Peacock, Mr Humphries, Mr Lucas, Mr Grainger, Miss Brahms and Mrs. Slocombe. There was also the department manager, Mr Rumbold, Mr Mash, Young Mr Grace, and his secretaries. The show rarely left the setting of the store, going back and forth from Mr Rumbold's office, the canteen, Mr Grace's office, and the Ladies' and Men's department.

Captain Stephen Peacock (played by Frank Thornton) was the haughty floorwalker. He had a reputation for staring at and 'chatting up' young women, such as Mr Grace's secretaries and so forth. He claimed to have fought bravely in the war, but some joked that he only ever worked in the kitchens shelling peas, peeling potatoes or some similar job.

Mr Wilberforce Clayborne Humphries (played by John Inman) was arguably the most popular character in the series. He was the senior assistant at the Menswear department, and lived with his mother. Whenever Captain Peacock would call for Mr Humphries' assistance, Captain Peacock would say: 'Mr Humphries, are you free?' Mr Humphries would then make a show of looking around and checking under the counter before replying: 'I'm free!' That line became the catchphrase of the show.

Mr Humphries was very camp - very camp indeed. Throughout the series there were countless jokes and one-liners which made reference to his effeminate nature, although at no point was it definitely stated that he was a homosexual. Both John Inman and the programme's writers always said that Mr Humphries wasn't in fact gay, just high-camp. He was, nevertheless, a very funny character, and was well played.

Mr Ernest Grainger (played by Arthur Brough) was the head of the Menswear department, and was an old and grumpy man, though very funny indeed. The head of the department was very often replaced; Mr Grainger was the original, and the best, but was later replaced by Mr Tebbs. Mr Goldberg followed in series seven, Mr Klein in series eight, and Mr Grossman, also in series eight. The final appointment was none other than Mr Humphries.

Mr James - aka 'Dick' - Lucas (played by Trevor Bannister) was the young, cheeky junior assistant in the menswear department in the first seven series of Are You Being Served? Mr Lucas would mainly make cracks at Mrs Slocombe, and was often scolded by Captain Peacock. Later, Mr Lucas was replaced by Mr Bert Spooner (Mike Berry) for the final three series. Although ostensibly a different character, when Mr Spooner took up the mantle of junior assistant, the character didn't differ much from Mr Lucas.

Mrs Betty Slocombe (played by Mollie Sugden) was the head of the Ladieswear department. Her hair was usually a different colour each episode, such as green, blue, yellow etc. She was a bit snobbish, and displayed her quick temper towards Mr Lucas/Spooner, and was often making remarks about her pussy (referring to her cat), totally oblivious to the suggestiveness of the remarks. One such typical comment was: 'I didn't get a wink of sleep last night. My pussy was so aggravated, and I had to sit up all night stroking it'.

Miss Shirley Brahms (played by Wendy Richard1) was the Cockney junior assistant to the Ladieswear department. She was pretty, perhaps a little ditzy, and often used poor grammar. She was often leered at by Captain Peacock, and, like Mrs Slocombe, she also had a quick temper towards Mr Lucas/Spooner.

Mr Cuthbert Rumbold (Nicholas Smith) was the manager of the department. He was bald, spectacled, big eared, and incompetent. He would think up wild, far-fetched reasons and solutions to any disagreement or debate between the staff. The staff would often make cracks at the size of his ears. Something to the effect of:

Rumbold: Well, Mr Humphries, I will keep a keen ear to the ground.
Humphries: You must cover a lot of territory...

Young Mr Grace (Harold Bennett) and his brother Old Mr Grace (Kenneth Waller) were of course the owners of Grace Brothers Department Store. Young Mr Grace was the first to appear on the show, and was, despite his title, very old and frail. He had a secretary and a nurse, and both were very large-breasted, attractive and prone to wearing revealing clothing. Whenever one of them would bend over to pick something up from the floor, Mr Grace's pacemaker light would start going off flashing and beeping. Later in the series, Young Mr Grace was replaced by his brother Old Mr Grace, who, despite his title, in fact looked younger than Young Mr Grace.

Mr Mash (played by Larry Martyn) was a member of the packing department, and was often reprimanded by Captain Peacock for appearing in the public-facing areas of the store during opening hours. Cheeky and humorous, Mr Mash was replaced in the programme after the third series by Mr Beverley Harman (Arthur English), who was savvier, funnier, much more insolent towards Captain Peacock, and often played more of a major role in the plotlines.

Like many British TV sitcoms of the 1970s, Are You Being Served? was given the full-length feature-film treatment in 1977. With Grace Brothers closed for refurbishment, the staff all go on holiday together to the Costa Plonka in Spain. To their surprise, they find themselves in the midst of a revolution, and an unfortunately not very funny film.

In the early 1990s, Are You Being Served? was revived for a sequel series, Grace and Favour2 which was set in a country manor. Many of the original characters returned, including Mr Humphries and Mr Rumbold, Mrs Slocombe and Miss Brahms and Captain Peacock, alongside some fresh blood such as Miss Lovelock, Mr Molterd and his daughter, Mavis. Although the original show ran for ten series, Grace and Favour wasn't as well loved by the more sophisticated audiences of the 1990s and only lasted for twelve episodes.

http://www.aybs.british-sitcoms.com/
1Now best known to British TV viewers as Pauline Fowler, one of the two characters that have been in the soap opera EastEnders ever since it began back in 1985.2Known in America as Are You Being Served? Again!