'Dad's Army' - the 1971 Film Content from the guide to life, the universe and everything 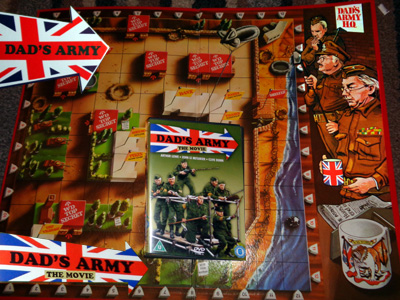 How can these stupid British ever hope to win?
- Opening line, spoken by the German General.

Dad's Army began life as a popular television sitcom made between 1968 and 1977. It was so successful that in 1970 Columbia Pictures expressed an interest in making a film adaptation of the show, featuring the same cast. This film was released in 1971.

In June 1940 in the seaside town of Walmington-on-Sea, many of the locals hear the speech given on the wireless by Anthony Eden. Eden calls for all men outside serving age to sign up for a new organisation provisionally called the Local Defence Volunteers, later renamed the Home Guard. Among those listening is local bank manager Arthur Mainwaring, who appoints himself the town's captain. After a period in which the men are armed only with armbands and uncontrollable enthusiasm, the company attends a local training exercise in which they cause havoc. Considered failures by all, how will they react when a desperate crew of an enemy aircraft hold many of the town's dignitaries hostage?

Actors and characters in Bold appear in the original television series.

Most of the characters were regulars in the established BBC television series. Even Colin Bean, who played background character Private Sponge, appears in the film. Yet there was one exception, affecting the only female regular character. Columbia Pictures felt that actress Janet Davies was too old to play Mrs Pike, and wanted a younger, sexier actress in the role. She was replaced by Liz Fraser, an experienced actress who had appeared in films such as I'm Alright Jack opposite John Le Mesurier and Peter Sellers and many of the early Carry On films.

I don't think the recasting worked in the audience's eyes. It was a mistake, in my view, not to cast Janet in the role because the viewing public had come to recognise her as Mrs Pike. But that was a decision taken by Columbia.

When Dad's Army's creators, Jimmy Perry and David Croft, developed the idea for a film adaptation of Dad's Army, they approached a friend, director Norman Cohen, who secured the interest of Columbia Pictures. The film version of Dad's Army featured most of the stars of the television series. Columbia Pictures also received permission to use Who Do You Think You Are Kidding, Mr Hitler?, the television series' theme tune. This had been written by series co-creator Jimmy Perry and Derek Taverner and sung by wartime entertainer Bud Flanagan. This won the 1971 Ivor Novello Award for 'Best Theme from Any Film, Television Programme or Theatrical Production'. The BBC also provided the sound clip of Anthony Eden's broadcast.

Although the majority of the same actors in the television series were included in the film, the film has a different appearance than in the television series. Of course a Columbia Pictures production could not use the main BBC set for the church hall that the company meet in, so a new set was used, filmed at Shepperton Studios. Most of the location filming took place in Chalfont St Peter in Buckinghamshire rather than Thetford in Norfolk, so the town of Walmington-on-Sea looks quite different1. The film's larger budget did mean that extras were hired, so that the town did seem to have a population of more than the main cast. Some of the town's landmarks mentioned in the series, such as the Rock Emporium, are mentioned in the film. The town now appears to be in Kent, as the local police station is part of the Kent Constabulary, rather than in Sussex2. The bank that Mainwaring, Pike and Wilson work at is now the 'Martins Bank' [sic] and not 'Swallow Bank' as in the series3. Similarly, Jones has a different type of lorry, now painted in dark and light blue and not blue and white. The uniforms are also different to the battle dress seen in the television series.

Although the film was a tremendous success Jimmy Perry and David Croft, who had originally created Dad's Army and wrote the screenplay, were disillusioned by the experience. They had enjoyed almost complete control over the BBC series, but found working with an American film company that was more interested in making a profit than making the film correctly to be frustrating. Jimmy Perry later said:

The power for making decisions was taken out of our hands... and although I worked on the film, it was only as a technical advisor. There were many arguments because Columbia didn't want what we'd conceived, and, in my view, the whole set-up was wrong – it couldn't capture the atmosphere of the TV series.

Although Perry and Croft had created an outline for a sequel, it was never put into production.

Like many other British war films made at the time, Dad's Army effectively uses genuine war footage. It even includes the actual speech by Anthony Eden that led to the creation of the Home Guard. There are potent sequences in which the Germans' military might, including Panzers and the Luftwaffe, are compared and contrasted with the platoon's arsenal of an old bath tub, a pram and some glass bottles filled with petrol.

A lot of the plot of the first half of the film was based on early episodes of Dad's Army, but this is not a flaw. The film was made at a time when television episodes were expected to be broadcast once, never to be seen ever again. As the first series was made before the programme was popular, many of the audience would not have seen it and so the jokes would come across as fresh. Even for those who had watched the show from the start, the first episode was broadcast in July 1968, almost three years before the film was released in cinemas.

The film's only flaw is the new Mrs Mavis Pike as Liz Fraser, through no fault of her own, is unsuitable for the part. She was only 15 years older than her character's son, Frank. One of Dad's Army's background themes, again hinted at in the film, is that Wilson is really Pike's father. For Wilson to have fathered Frank Pike, he must have been in a relationship with the new, younger Mavis when she was an unthinkably young age, which raises unnecessary unpleasant implications.

The film's overall plot – in which a group of raw, inexperienced recruits join up to serve their country, are trained and then moulded into a cohesive fighting force – is not exactly unique4. What makes this film different is that at the end of the process, Mainwaring's men are exactly as ineffective and incompetent as they were to begin with. Despite this, they actually manage to save the day by defeating a vastly outnumbered enemy consisting of three airmen, by showing that they are actually brave.

Dad's Army
Characters | The 1971 Film
1All the location footage shot in the town high street seems to include the same horse and cart going halfway along before doing a u-turn and returning towards the camera.2In an amusing scene no-one is sure exactly where Walmington is located and they cannot see it on a map of the south coast, as this is obstructed by Wilson's thumb.3Martins Bank was an existing bank at the time Dad's Army started in 1968 and so the BBC under its product placement policy could not refer to it. Martins Bank ceased trading in 1969 when it was taken over by Barclays Bank.4Numerous other films have, over the decades, used this plot, including Carry On Sergeant (1958), Full Metal Jacket (1987) and Starship Troopers (1997) to name but three.