The Tootsie Roll Battle and the Chosin Few Content from the guide to life, the universe and everything 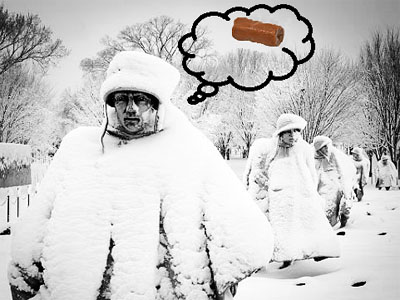 Snack food goes everywhere: in your bum bag (or fanny pack) on a run, in your lunchbox to school, in your carry-on luggage for a long plane ride. Snack food has even gone into space. The advantages of snack food are many, from portability to long shelf life to the comfort of familiarity in a strange place. What snack food lacks in elegance, it makes up for in convenience and mass appeal. Yes, but can it win a war?

Ask the Tootsie Roll Company and the 'Chosin Few' – US Marines, British Commandos and South Korean troops who survived the Battle of Chosin Reservoir in 1950. They'll be glad to tell you all about the amazing military power of sticky chocolate.

What is a Tootsie Roll?

A Tootsie Roll is a chewy chocolate-flavoured confection that comes in bars or the popular midget size. Each Tootsie roll contains sugar, corn syrup, partially hydrogenated soybean oil, condensed skim milk, cocoa, whey, soy lecithin, and natural and artificial flavours. It's certified kosher and gluten free. The company has been making them since their invention by Leo Hirshfield in 1896. He named the candy for his daughter Clara, who was called 'Tootsie'. These days, the company makes over 60 million Tootsie Rolls per day – which is a lot of turgidly flowing chocolate and corn syrup.

The Tootsie Roll people are proud of their high ethical standards, family orientation, and (US) patriotism. '...since World War II, owing to their non-perishable qualities and resistance to harsh weather conditions, Tootsie Rolls have been an integral part of US military rations,' they boast1. In a sense, this boast is a massive understatement – because some veterans of the Korean War believe the candy saved their lives, turned the war around, and possibly stopped Communism from spreading.

It's a big claim, and it rests on two factors: weather and military misunderstanding.

Late November 1950: 20,000 UN troops were surrounded in Korea by 120,000 Chinese troops. The UN troops included soldiers of the 1st US Marine Division and 7th US Army Infantry Division, the UK's 41st Independent Commando Royal Marines, and South Korean Marines2. The area where the UN troops were surrounded was known to the Koreans and Chinese as Changjin, but the UN troops were using World War II maps which labelled the reservoir 'Chosin' – the name of the reservoir in Japanese. So the ill-fated troops soon began referring to themselves as the 'Chosin Few'. Their prospects for survival did not look good.

There was only one way out of the death trap: to break through the Chinese encirclement and march 78 miles southeast to the Sea of Japan, where sea-based rescue was possible. When asked by a war correspondent if this amounted to a retreat, US Marine Division General Oliver Prince Smith replied patiently that the Marines were merely attacking in a different direction3. However, surviving the trek to the sea was going to be a major ordeal, for several reasons.

Obviously, being massively outnumbered was a problem, but the encircled troops were well-trained and determined. However, the bitter cold was working on the side of the Chinese. Temperature estimates vary, but all agree that it never got above zero (Fahrenheit), and that much of the fighting took place at around −20. At night, the mercury plunged, and the winds blew at 35-40 mph. Weapons froze, especially the M1 and M2 carbines. Anything coated with oil froze. Water-cooled machine guns worked if they had antifreeze in them. Only the mortars were reliable. But soon, they were running out of ammunition – supplies that had to be airdropped in uncertain weather.

The troops had heavy coats. They had well-designed sleeping bags. What they didn't have was food. C-rations froze. Coffee froze before it could be drunk – there was the danger of lips and tongues being stuck to the metal cups. In such bitter cold, how could these men keep fighting?

As this inch-by-inch running battle raged along mountainous roads, UN support dropped pallets of supplies whenever the weather permitted. Beleaguered troops radioed their needs using an agreed-upon code to keep the enemy in the dark about what was being sent. Unfortunately, not all radio operators got the Marines' code sheets. A typical military SNAFU   – but one with interesting consequences.

They got parachute-loads of Tootsie Rolls. Thousands and thousands of them. (Later, somebody read the code sheet and sent some mortar shells, too.)

Starving troops seized on the high-sugar candy: candy that didn't mind being frozen. Candy that could be melted in the mouth, or under your armpit (sorry, but this is war, and drawing room manners don't apply). Tootsie Rolls kept hunger at bay, giving the soldiers energy. Tootsie Rolls had another use: thawed and softened, they could be applied to bullet holes in fuel drums, gas tanks or radiators. The cold would harden the patches again. Leaks were sealed, equipment rendered operational once more.

The troops slogged on, leaving a litter of Tootsie Roll wrappers along the road to safety. More than 3,000 UN troops died. No one is sure how many Chinese died, though the estimate ranges from 20,000-60,000. One thing is sure: several Chinese divisions were rendered useless for the rest of the war. The Chinese victory at Chosin was of the Pyrrhic nature. Although the conflict never ended – officially, North and South Korea are still at war – the North and their Chinese allies didn't succeed in taking over South Korea. And that may, in fact, be partly due to the incredible qualities of those little rolls of chocolate.

So now you know why some Korean War veterans include Tootsie Rolls on the table at their reunion dinners. (And why sometimes, the company sends representatives to mark the occasion.)

Go to the Tootsie Roll site to read a Korean vet's tribute to the life-saving powers of Tootsie Rolls.

For an in-depth look at the supply and materiel situation at Chosin, check out this assessment from the US Marine Corps.

1See their webpage, 'How Tootsie Does It', for this and other important Tootsie Roll-related information.2Figures from 'Chosin Reservoir: Epic of Endurance'.3There has been a lot of discussion about whether General OP Smith swore on this occasion, making him part of the 'cursing generals' tradition. The consensus of a debate on The American Catholic website appears to be that the popular quote, 'Retreat? Hell, we're just attacking in a different direction!' was due to reporter's licence.