Real Men Don't Carry Umbrellas: From Wellington to Obama Content from the guide to life, the universe and everything 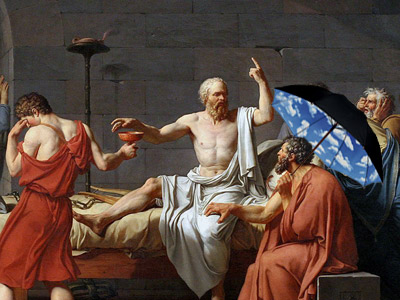 Lord Wellington does not approve of the use of umbrellas during the enemy's firing, and will not allow the 'gentlemen's sons' to make themselves ridiculous in the eyes of the army.
– Military communication during the Peninsular War

Lord Wellington was not best pleased to see his otherwise well-turned-out Guards officers sporting umbrellas at the Battle of Bayonne1 in 1814. It wasn't that the Iron Duke objected to umbrellas – in later, civilian life, he had a whole stand full of them, though they were all really swordsticks. But the officers shouldn't open them in view of the enemy: they made the French titter and taunt.

Umbrellas are an ancient invention, going back about 4,000 years. They've been spotted everywhere, from China, India and ancient Mesopotamia to classical Greece and Rome. In olden times, umbrellas were a mark of upper-class distinction: often, only the ruler or his representatives got to be protected from the sun or rain. (Remember this fact; it's important.) The Greeks and Romans liked sunshades – after all, it didn't rain that much, and they needed more protection from sunlight than water. They extended the franchise to the middle class. However, the umbrella or parasol became a gendered item. Only women could use them without fear of reproach. Men who carried the things looked, well, wussy. A Roman overcome by the heat needed to seek the protection of the velarium, an awning that was used to shade Roman streets and open areas, even being used to cover the Colosseum. Romans took their shade seriously, but Roman men were on their dignity.

Umbrellas arrived late in Western Europe. In fact, they didn't show up until the mid-18th Century, when British tourists first noticed them in France. Where did the French get them? From the Italians, partly, but also from the popularity of Daniel Defoe's Robinson Crusoe. Defoe described his hero as fashioning an all-weather umbrella out of animal skins, very practical. French fans called the innovation a 'Robinson'.

Strangely enough, considering later history, the umbrella was a tough sell in England at first. The object excited ridicule on London streets in the 1750s, when traveller, philanthropist and social reformer Jonas Hanway became the first Englishman to carry an umbrella in public. Hanway, a stubborn individual, persisted in the practice in spite of harassment by cab drivers, street urchins, and the lower sort of passerby. It seems to have taken at least 30 years for umbrellas to catch on in England, but in a country with that much annual rainfall, the umbrella could be seen as inevitable. Sooner or later, even the fashion-conscious succumbed. But it was still a genteel appurtenance.

The British military eventually came to respect the umbrella. During World War II, Major Allison Digby Tatham-Warter, DSO, became famous for carrying one into battle. He even did this at the Battle of Arnhem. This may sound like an affectation, but the umbrella had a practical purpose beyond keeping Tatham-Warter dry: he was prone to forget passwords, and as he said, 'only a bloody fool of an Englishman' would carry an umbrella into battle2.

Although the British wised up, the Yanks never did – at least, the US Army and Marine Corps didn't. Current regulations still forbid soldiers to do certain things while in uniform. Among them are pushing a pram and carrying an umbrella. But Army and Marine Corps personnel can carry umbrellas – if they're female. The umbrella remains gendered, at least in these services.

The Umbrella Question became hotly debated in the late 1990s, when Pentagon personnel tried to get the rules changed. The reason? The Pentagon's parking lot is huge, and it may take a uniformed officer as long as 15 minutes to get to shelter from the South Forty. Suck it up, said the Army and Marine Corps. Observers opine that the problem is, in fact, a case of interservice rivalry and duelling machismos. Neither the Army nor the Marine Corps will blink first. Real men do not carry umbrellas.

The result of this rule can be seen at the annual Army-Navy football3 game. While the Navy, who apparently acknowledge the existence of weather, sit comfortably under umbrellas, the Army stoically endure rain and snow. Perhaps the stadium should install a velarium for all these modern Romans.

The last has not been heard on the military umbrella issue. As recently as 2013, US President Barack Obama encountered criticism for his blatant violation of military protocol. While waiting to greet the Turkish President in a drizzle, Obama instructed his Marine escort to hold his umbrella for him. As a head of state greeting another head of state, Obama needed to stay dry, just like those potentates in ancient times. (We told you that was important.) The Marine had little choice but to violate protocol and standing orders – after all, the US President is the Commander-in-Chief of the armed forces. It says so in the Constitution, which alas, contains not one word about umbrellas. The message here is clear: the US President should only be accompanied by an honour guard consisting of naval officers and women, at least when it's raining outside.

1France, not New Jersey.2This was the same intelligent officer who taught his men how to use bugle calls from the Napoleonic Wars – just in case the radio failed. Those bugle calls turned out to be very useful during the Battle of Arnhem. This man knew how to use an umbrella: he even employed one to disable an enemy armoured car, by inserting the brolly into the vehicle's observation slit.3American football. Real Americans do not play soccer.