Parasols - A Brief History Content from the guide to life, the universe and everything 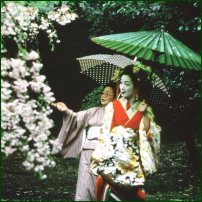 When hearing the word parasol today, most people will probably think of those large parasols you find on beaches, balconies, in gardens, beer gardens and other sunny places that are frequented by people. Few people will know that these modern items are quite similar to those our ancestors had thousands of years ago.

They are Old, Very Old

Pictograms and sculptures (displaying parasols or canopies1) from Thebes (Egypt), Nineveh (Assyria), Persepolis (Persia), and mentions in myths from India date back as far as about 1200 BC. Materials of parasols and canopies were manifold: from palm leaves or feathers in Egypt, to constructions of bamboo and paper in China. The latter were collapsible and waxed or lacquered, so we can assume that they withstood a rain shower, and hence were the first umbrellas2 in the modern sense of the word. These canopies and parasols indicated the high rank of their owners. In Egypt, a tanned skin wasn't fashionable, so the noblemen and -women sheltered themselves from the sun by use of parasols. In Assyria, only the king had the right to be protected from the sun by a parasol. For many centuries, parasols remained reserved to pharaohs, emperors, and kings, and a few high-ranking noblemen. It was left to the servants to hold them over their masters or mistresses.

From the Far East to the West

Via the old trading routes like the Silk Road, the parasol found its way to Europe, probably via Persia and Greece, where they were popularised by Greek women between 1500 and 100 BC, to Italy , Spain and Portugal3. It didn't take long until the Roman Church made use of canopies and parasols to protect their dignitaries from sun and rain (the first documented mention being as early as 802 AD, when the abbey Alcuin of Tours sent a note and an ombrello4 to the bishop Arno of Salzburg). In the 12th Century, the Doge of Venice was granted the right by Pope Alexander III, to have a parasol carried over him. This habit led to the spreading of parasols used by the gentry across the continent. It is still a custom that parasols are held over Catholic dignitaries during the Corpus Christi processions. Still, there are huge gaps in the recorded history of the parasol, which is why some people suggest that what we consider to be halos on pictures of saints, are merely misunderstood and unrecognised parasols.

Over the next few centuries, the parasol became very much a fashion item in Europe, due to the reduction in its size. People were now able to hold a parasol themselves, instead of requiring servants to hold them for them. In the early 16th Century, parasols became popular in France through Catherine di Medici who brought one for her wedding with the Duke of Orléans in 1533. In the early 17th Century, these umbralacums or ombrellinos were made of leather and used in Italy by horsemen while riding, and by women and a few men in unsheltered theatres in Rome. Lighter materials such as cotton or silk were soon being used, the spokes were either made of wood or of fish bone, and the main colour was green for quite some time - maybe because its complementary effect to red made even a healthy-coloured face look pale. Parasols were pretty much a 'woman's item', and were more or less confined to the 'high society' of those days.

In 18th-Century England, parasols completed every fashionable woman's wardrobe, matching the various outfits then, as handbags and shoes do today. As in Egypt all those centuries before, a pale skin indicated the high rank of the owner, signifying that they didn't need to work outdoors, or, in fact, work at all. Along with the fashion changed the number of spokes, the size of cover, the length of the handle and the colours and patterns. In around 1800, the cover often wasn't larger than a handkerchief with just four spokes, but the handle had a length of 80cm. About 50 years later, parasols that could be buckled at half length became very popular because it was easier to carry them. They were only about 40 - 50cm in diameter, with the handle being about 50 - 60cm long.

At that time, parasols had more purposes than just that of protecting ladies from the sun; they were used as a means with which to flirt, as well as to keep unwanted persons at bay. Unlike the curved handles of some umbrellas that we are used to today, those of parasols were straight, with only a small curve at the end sometimes5. With the end of the 19th Century, the handles got longer and longer, reaching their greatest length of up to 115cm in 1910. Considering the average height of the woman of the time, this meant they reached up to their chest. In proportion to the length, the cover got larger and overall, the design got simpler.

Sadly, with the beginning of the 20th Century, the days of the parasol were numbered. More and more, the umbrella took its place, and the beginning of a new health cult in the 1930s, proclaiming a tan as a sign of health, heralded the portable parasol's demise. Nowadays, you'll still find women in Japan and Spain carrying parasols, but otherwise, the item is more or less forgotten. But who knows, with skin cancer due to over-exposure to the sun being on the rise, we'll maybe see the parasol's resurrection.

1These are always depicted opened, probably to symbolise the vault of heaven opening over a king, or to indicate the king's closeness to heaven.2The first umbrellas in today's use of the word didn't come about until the 17th Century.3It is thought that parasols came back in fashion in 16th-Century Portugal after people brought them home from the colonies in Asia and Africa.4From Latin 'umbra' for shade, shadow.5However, this wasn't really made it difference to the umbrella; materials, colours and designs differed immensely, and from about the 19th Century onwards, parasols and umbrellas developed in very different directions, with the umbrella becoming a useful item that provided protection from rain, and the parasol being an item of statement and fashion.