Little Hagia Sophia Mosque, Istanbul, Turkey Content from the guide to life, the universe and everything 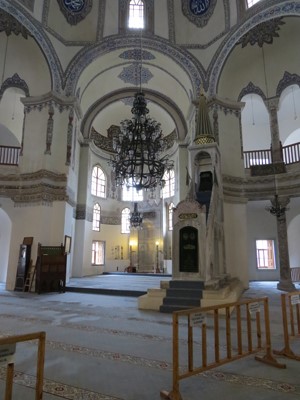 Little Hagia Sophia Mosque (in Turkish, Küçük Ayasofya Camii) is in the Sultanahmet area of Istanbul, the area which was the centre of ancient Constantinople when it was the capital of the Roman Empire. It was built as a Christian church during the time of Emperor Justinian (6th Century), and was known as the Church of Saints Sergius and Bacchus. It was converted into a mosque after the Ottoman conquest of the city (15th Century) and was given its present name by the Ottomans due to its similarity to the Great Church, Hagia Sophia. It is the oldest building in Istanbul which still serves its original purpose, although it has changed from Christianity to Islam.

Archaeologists are undecided as to when exactly the church was built. It was sometime around 527 AD - that was the year Justinian became emperor, and we know he commissioned the church, but it's not clear whether he did this before or after he took the throne. The church was in the grounds of the Hormisdas Palace, a small palace southwest of the Hippodrome. It's known that Justinian lived here before he was emperor, so many feel that the church was built as his private chapel.

Jonathan Bardill, a Postdoctoral Fellow of the Institute of Archaeology, Oxford, made a strong case in 1995 that the church was built after Justinian had become emperor in August 527 AD and had left the Hormisdas Palace and moved to the Great Palace. The church was not for his own use, but for that of a community of Monophysite monks that Justinian's wife Theodora had offered refuge to in the Hormisdas Palace. The Monophysites were a group, later considered heretics, who believed that Jesus Christ had a single divine nature as opposed to the dual divine and human natures supported by most Christians.

The contemporary historian Procopius said that the church was physically attached to the neighbouring church of Saints Peter and Paul, sharing the same atrium (entrance hall). There's no trace of such a second church now, but this could explain why the present church is a slightly irregular shape. Most churches of the day were rectangular and symmetrical. This one is not quite rectangular, with none of the walls being quite parallel. In addition, the axis of the central, octagonal space does not line up with the axis of outer part but is turned slightly. These details are said to give the church a rather 'higgledy piggledy' look. If the church was built by being attached onto the side of an existing church in a confined space, this would explain the lack of symmetry.

A saint in Christianity is any deceased person who is considered to have lived such a holy life that they are guaranteed to have been rewarded by going to heaven. Many Christians pray to saints rather than directly to God, asking them to intercede with the Almighty. This practice was common in the early Christian Church and is still the norm in the Orthodox and Roman Catholic branches of Christianity.

Saints Sergius and Bacchus were legendary characters who were Roman soldiers in the army of Galerius, at a time when Christianity was outlawed. It was discovered that they were secret Christians and they were tortured and killed because they refused to give up their faith. The story is recorded in The Passion of Saints Sergius and Bacchus which presents the tale as historical, but it is full of contradictions and appears to be a work of fiction. Nevertheless, the saints were great favourites in the Roman army after Christianity became the official religion of the Empire. Their feast day was 7 October.

Some interpret the original account of the saints as indicating that they were gay lovers. Whether this was its intention or not, they have in recent years become popular within the gay Christian community. 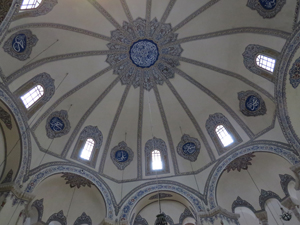 The church is architecturally interesting as it was one of the first attempts in the city to enclose a large internal volume using a dome. The Romans had achieved this in Rome in the Pantheon, the temple to all the gods, about four centuries earlier, but that building was an oddity. It was a one-off experiment never to be repeated - a giant dome of mass concrete, supported by concrete walls up to six metres thick. The whole design was cumbersome and very bulky-looking from the outside. It only worked because the external view of the temple was blocked by other buildings around it.

The Church of Sts Sergius and Bacchus was much smaller than the Pantheon, but attempted to address the same problem - how to have a large and impressive central space (known as the 'nave'). The result was a design based around an octagon, elegant and spacious while still appearing delicate and light. It's not unique in this - a similar design was used at about the same time in the Church of San Vitale in Ravenna, Italy, also commissioned by Justinian. But in general, large octagonal buildings are rare1, and only really became popular a thousand years later when the Ottomans used this shape for mosques.

The building is designed with a central nave which is tall, impressive and octagonal, surrounded by a functional outer part which is lower, is divided into two storeys, and is basically rectangular. Eight pillars stand at the corners of the octagonal nave and arches join these together. The walls are built straight upwards from the arches so that a cross section of the nave at the top of the arches is also octagonal, forming a base on which the dome rests.

The dome is roughly octagonal in cross section to match the base it rests on. There are 16 evenly spaced ribs supporting the dome, with two ribs resting on each side of the base. Eight of the sections of the dome between these ribs are thus directly over the arches, and each of these has a window in it.

At the eastern end of the octagon is an apse - think of a cylinder standing on its end with a hemispherical top. Then slice this vertically and stick it onto one side of the octagon to get a semi-circular 'bay'. This was used for the altar, and has more windows at the back to let light in. Light comes into the central nave from the functional outer area as well, so the whole design is very bright.

The nave is joined to the 2-storey outer area at ground level and at the first floor by a number of arched openings. It is possible to walk almost all the way around the central space in the outer part. Only the presence of the altar apse prevents you from going the whole way around.

Originally, the central space was decorated with coloured marble up to the level of the first floor and with gold mosaics above this. Procopius' description says that the church was 'adorned throughout with an abundance of gold'. Between the marble and the mosaics was a band of stone which is still in place. It is inscribed in Byzantine Greek with the dedicatory notice describing Justinian and his wife Theodora, and also Saint Sergius, although for some reason Saint Bacchus is not mentioned.

Conversion to a Mosque 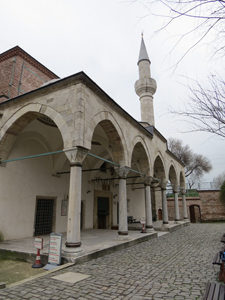 When the Ottomans conquered the city in the 15th Century, they converted the church into a mosque. They plastered over the mosaics and removed the marble, making the interior very plain. Islam did not encourage pictures of people, preferring abstract patterns. As is normal in a mosque there is carpet on the floor, and there is a mihrab (prayer niche) and a minbar (ceremonial staircase - the Muslim equivalent of a pulpit). There's also a raised platform, the müezzin mahfili, in the nave with stairs up to it which is used by the müezzin2 during religious services.

Outside the building, the main alterations were to add a minaret, the slender tower from which the call to prayer is sounded, and to replace the old atrium with a more fitting entrance porch.

The present décor inside is very plain, with flat panels of a neutral beige colour with the occasional calligraphic panel in blue. It is very elegant, but quite different from the original ornate style of the Byzantines.

Most mosques are built aligned with Mecca since that's the direction people face when praying. The prayer niche is usually in the middle of the side which faces Mecca, indicating the direction to face when praying. The people don't face the mihrab but use it to align themselves to Mecca. Because the Church of Sts Sergius and Bacchus was not aligned to Mecca, the mihrab was placed off centre in the altar apse. In addition, the carpet has a strong lined pattern, which is arranged at an angle of about 35° to the axis of the church, so that people lining themselves up perpendicular to the lines in the carpet are facing Mecca. This adds to the slightly off-kilter look of the building which is already not quite symmetrical even without this feature.

How to Find the Mosque

The mosque is southwest of the Hippodrome, almost at the Sea Walls. Nowadays the railway line built for the Orient Express runs between the mosque and the walls so the mosque is right up against the train tracks.

The usual rules for visiting a mosque apply:

1One exception was Charlemagne's 9th-Century octagonal chapel in Aachen which was deliberately copied off San Vitale to emphasise the connection between his empire and the Roman Empire.2The Müezzin is one of the two officials during religious services in a Mosque, the other being the Imam.