Advanced Driving - How to Improve Observational Skills Content from the guide to life, the universe and everything 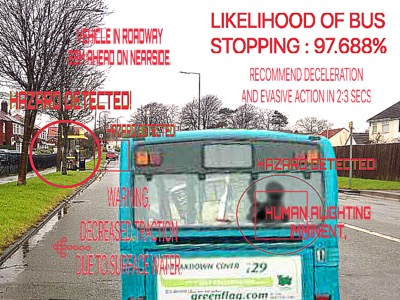 The cardinal rule for any motorist is always to be able to stop safely and under control within the distance we can see to be clear.

So what's the big deal?

Quite simply - we are not trained to be observant. Most drivers focus a matter of yards in front of their vehicles. It's the things we don't see or are unaware of that are developing out of our narrow field of vision that cause mayhem. Concentration and observational skills need to be worked on like any other driving/riding technique.

A momentary lapse of concentration, like those reportedly caused by that iconic 90s advertisement, takes our eyes and thoughts from the road, often with disasterous results.

Be aware of your surroundings, say hi to Eva in passing, but above all be mindful of what is occurring around your vehicle!

'I Didn't See That Coming!'

How many times have you seen (or been!) an irate driver stuck behind a bus that has stopped suddenly and unexpectedly? All the driver can do is sit with his or her signal on and hope some kind soul will let him or her out to continue on his or her rather shortsighted journey. These 'begging signals' are the sign of a driver or rider with poor observational skills.

This brief introduction aims to give you a starting point in becoming a better, safer motorist by improving your observational skills.

Take the bus. Did it actually stop suddenly or indeed unexpectedly? Of course not, buses by their very nature are dim creatures of habit (barring mechanical breakdowns). Using basic observations that same driver could have avoided the situation by simply being a little more aware. Observational skills, like everything else, improve with practice.

Put yourself on that road, see the bus stops every few hundred yards? That tells you you're on a bus route. See the people waiting at the stops? That tells you the bus hasn't arrived yet so it is probably trundling up behind you. Bus stop empty? All those people are now passengers on the bus that's ahead of you. Beginning to get the idea? Linking one piece of information to a possible outcome is the foundation of advanced driving or riding.

That same bus has windows, you can see people standing up, gathering belongings and walking towards the exit. Guess what? Yup, the bus is about to stop! Back off a little and plan a safe overtake. You've magically avoided the need for a begging signal and wasting a few minutes ranting in a cloud of diesel fumes!

Most of us can remember the Terminator movie scenes where we have an Arnie's eye view of potential targets and threats, computer chips scanning the area for weapons, John Connor or a nice pair of leather trousers.

The same idea is embodied in observational skills; what's in front of me, what's to the sides and what's behind? Obviously we haven't the advantage of superimposed retinal red targets highlighting potential hazards but we do have a very effective on-board computer of our own to evaluate what we are seeing. The brain is a wonderful motoring tool, we just have to power it up!

Information is everywhere, the trick is to identify and use it to our advantage. Only by recognising a hazard can we put in place a plan to avoid it - and the beauty is we don't need to be cyborgs to do it!

What is a Hazard?

For six decades the Emergency Services (UK-centric) have been trained in Roadcraft, the Police System of Car and Motorcycle Control. This mighty book simply states that if you are aware of a hazard, anticipate and use that information, you can be in the right place at the right speed in the right gear to avoid it. Forget the physical act of motoring for now, just concentrate on the being aware of a hazard bit. A hazard is anything that contains an actual or potential danger.

There are three main types of hazard:

THREE main types. Just think of the programming time Skynet could've saved only having to worry about three possible threats!

Recognising or observing a potential hazard developing is great, but what then?

Take the information in - that passenger is standing up on the bus. There's a bus stop up ahead. The bus is probably going to slow down, signal, then stop. Use that information. Back off a little. Plan a route around the bus if it's safe to overtake. Make sure your speed and gear matches your plan, either to overtake or slow down and stop if necessary - well within the distance you can see to be clear.

Give that information back to other road users. Backing off from the bus you may need to touch your brakes, your lights will give those following the idea you may be slowing/stopping. Moving out slightly not only gives you a better view of a possible safe overtake but may make the following drivers aware there's a bloody great bus about to block their path, obviously a signal prior to overtaking gives them the information you are about to move around the hazard if safe to do so.

And if something changes in the scenario we can take, use and give that new information!

A simple idea but one that relies on actually observing a hazard in the first place, as previously stated. Practice is key to improved observational skills.

Improve Your Obs - be a Commentator

The next time you're out on the road, be it as a driver, rider or passenger, or even on a bus or pedal cycle, try this simple exercise:

Open your eyes to what is actually around you. Try the Terminator scanning imitation but instead of the red CPU graphics (here's where you may get funny looks on the bus to work!) actually talk to yourself, tell yourself what you're witnessing. Look around, take in the sights. Most learner drivers are taught to look about 25 feet in front of them; this is a very bad habit, but thankfully one that can easily be broken.

Start simple. You'll be amazed at how many road signs you notice for a start, and local authorities don't like spending money unless they have to - so a warning sign is usually a clue that there's been a traffic accident at that location!

Train yourself to scan further, as far ahead as you can see. Then your immediate surroundings front and sides, then the rear view, then back to the far distance. The world will open up. You'll see things with new eyes and give your on-board computer a workout in the process.

Practice and give yourself a commentary. Just a few minutes at a time and be careful not to get distracted, keep your eyes on the road but notice things on the periphery. That too will get easier the better your observations become. Simply taking in the information around you makes you more alert, gives you more time to plan and makes driving a lot less stressful. After a few sessions you will notice how your senses have adjusted and become aware of things you previously hadn't seen, even on regular routes.

If you find yourself looking at a road sign and craning your neck backwards to see what it was, or your commentary is 30 seconds late, it simply means that you weren't looking far enough ahead in the first place. This is the way most advanced motorists start training; the one goal is to improve observational skills. Everything else follows.

So the next time you're stuck behind a bus, remember - there's no fate but what we make...