Is It Safe to Cycle? Content from the guide to life, the universe and everything 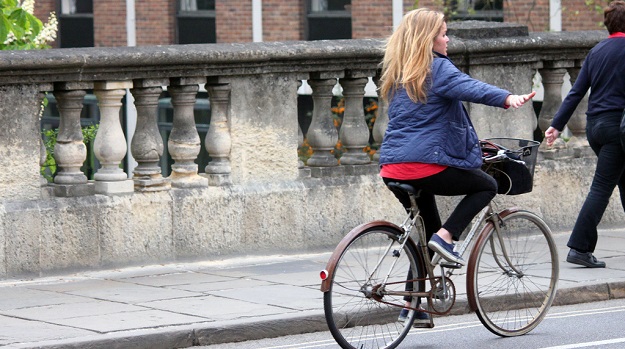 Cycling has become fashionable again. In the 21st Century, there has been a huge rise in cycling in British towns and cities, driven by congestion, rising fuel prices and better facilities for cycling. Worries about the environmental effects of motor transport and distrust of public transport are other reasons for people getting on their bikes. Transport for London recently reported a 91% increase in cycle use in the city since 2000. However, a war of words has broken out between cyclists, drivers and pedestrians.

On one side, cyclists are accused of getting away with murder. The web is full of complaints against irresponsible cyclists who cycle on pavements, ride the wrong way up one-way streets and jump red lights. Hugh Blagden of the Association of British Drivers said 'We should all obey the rules of the road but unfortunately cyclists have got to the stage now where they don't observe them at all.'

On the other hand, cyclists talk of drivers who throw doors open without looking, emerge from side roads as cyclists are passing, or overtake and promptly turn left. Some cyclists feel so marginalised that they have mounted a fight back. Every month, cyclists meet in London for Critical Mass, to celebrate cycling and to assert cyclists' right to the road.

Despite accounts of cyclists mowing down pedestrians, reliable information is hard to come by, as many minor accidents go unreported. However, according to the Department for Transport's figures, of the 6,924 pedestrians killed or seriously injured in Great Britain 2007, only 39 were hit by cyclists. As speed is a major factor in road casualties, it seems unlikely that many collisions between pedestrians and cyclists will cause serious injury.

As for cyclists, 2,564 were killed or seriously injured in road accidents in 2007. Analysis of the figures gives clues to factors that contribute to cycling accidents. Unfortunately, about a fifth of those injured are children, indicating that inexperience is a major factor. Nearly three quarters of accidents take place at or near a road junction, with roundabouts being particularly dangerous for cyclists. Road design over the years has concentrated on the needs of motorists, sometimes at the expense of cyclists and pedestrians.

However, the dangers of cycling can easily be overestimated. It is possible to cycle for many years without serious incidents. Statistically, you have one in a million chance of being killed if you travel for two hours and 40 minutes by bike. (Because there are more journeys made on foot but they are generally shorter, the figure for pedestrians is six hours and 30 minutes). As there are fewer accidents per cyclist when they ride together, the more people who cycle the safer they should be. And it's not just cyclists who argue that the benefits of cycling outweigh any risks.

The Cycle Touring Club (CTC) argues that cycling benefits the individual, the community and the environment. Firstly, cycling is healthy. It increases fitness, lowers the risk of heart attacks, helps in maintaining a healthy weight and reduces stress.

Secondly, it provides an efficient means of transport, particularly in urban areas. Studies have shown that, as modern cities have ground to a halt due to congestion, cycling has become the fastest mode of urban transport. Many journeys are less than five miles, a distance which is ideal for cycling.

Thirdly, cycling is better for the environment than motor transport, as it is pollution free and noise free. Every time you use a bicycle rather than a car, you reduce your CO2 footprint.

The Government recognises that cycling can contribute to the achievement of its objectives in the fields of transport, public health and liveability. It has committed itself to encouraging more cycling in England, and has significantly increased the levels of funding.

Sustrans has played a leading role in co-ordinating safe cycle routes in Britain. The National Cycle Network now offers over 12,000 miles of walking and cycle routes on traffic-free paths, quiet lanes and traffic-calmed roads. Transport for London has been busily laying out the LCN+, a cross-London network of on-and-off road cycle routes, while Cycle England has provided funding for a large investment in cycling in a Cycling City (Bristol) and sixteen Cycling Towns.

Cycle tracks and lanes can provide a great encouragement to cycling but they need to be well designed and maintained. All too often cycle lanes consist of a painted line along the road, which disappears at junctions. Cyclists also complain about cycle tracks which are full of potholes or littered with broken glass. The CTC view is that cycle tracks and lanes should be provided in addition to, not instead of, making the carriageway safer for cyclists. They advocate better education for cyclists and drivers, enforcement of speed limits, good road design and traffic management.

There is a debate about the value of bicycle helmets. The Highway Code recommends them but the CTC has doubts. They refer to recent research which suggests that motorists pass closer to cyclists who wear helmets than those without. It seems common sense to wear a helmet but, if you do, you should be aware that it will not protect you in all situations where your life may be in danger.

It is widely accepted that cyclists, drivers and pedestrians need to be more aware of the needs of other road users. Many organisations, from the Department for Transport to local cycling clubs, are working to provide information and education. For example, Cycle England has launched 'Bikebility' to rescue a 'lost generation' of children who would otherwise miss the opportunity to learn to cycle safely.

The Highway Code itself provides advice on safe cycling. For example, it points out the danger to cyclists of attempting to ride through the gap on the left hand side of large vehicles as they approach corners. Cyclists could also usefully equip themselves with a copy of Cyclecraft: The Complete Guide to Safe and Enjoyable Cycling for Adults and Children by John Franklin.

Cyclists have been around since the 19th century and there is every reason to believe that they will continue to use the roads for the foreseeable future. Although cycling is not without risk, it is also a cheap, sustainable and often enjoyable means of getting around. The dangers to cyclists and others can be minimised by intelligent road design and traffic management. Perhaps most importantly, cyclists, pedestrians and drivers need to learn how to get along together on our crowded roads. 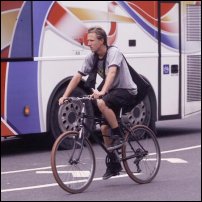