Sholom Secunda and Kinky Friedman Sing About the Holocaust Content from the guide to life, the universe and everything 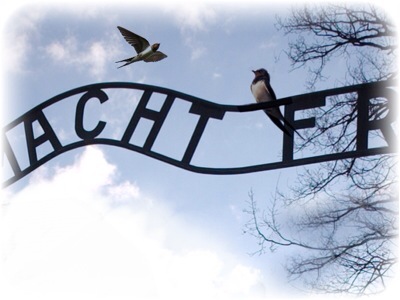 What passing-bells for these who die as cattle?
– Wilfred Owen, 'Anthem for Doomed Youth', 1917

How do we deal with tragedy on a massive scale? We're talking about real, human tragedy, the avoidable kind that only seems unavoidable because...

Human beings suffer,
they torture one another,
they get hurt and get hard.
– Seamus Heaney, 'The Cure at Troy', 1991

We build memorials to suffering. We create art around it. We reduce it, when we can, to symbols we can see and touch, in the hope that we will someday understand why people torture one another. One way to express our anguish and frustration at the pain of human-generated horror is to put it into music and sing about it. This has been going on for a long time. Just ask the ancient psalmist:

By the rivers of Babylon, there we sat down, yea, we wept, when we remembered Zion.
Upon the willows in the midst thereof we hanged up our harps.
For there they that led us captive asked of us words of song...
– Psalm 1371

The psalmist got hurt and got hard: that song ends with the wish that someone would slaughter the tormentors' infants by beating their brains out against the rocks. It is difficult to get harder than that, and perhaps singing out that raw agony was a way to ease the pain of having everything you ever loved destroyed by strangers who forced-marched you hundreds of miles to a foreign country. Call it ethnic cleansing.

The more recent and monstrous the event, the more painful it is to sing about it – and the more likely the song is to be polarising or subject to misinterpretation. The agony of human evil can generate some pretty strong words, and the metaphors are not always elegant. Take the Holocaust, arguably the watershed horror of the 20th Century. In this organised tragedy, human beings participated in the deliberate industrialised murder of 15 million other human beings. How do you make art out of that? What metaphor do you use to describe the application of the Ford Method to serial killing?

O the chimneys
On the ingeniously devised habitations of death
When Israel's body drifted as smoke
Through the air...
– Nelly Sachs, 'O die Schornsteine'2, 1947

You can write or sing about the machinery of death. Or you can borrow Wilfrid Owen's simile, and talk about cattle. Two Jewish songwriters have done this, with different results.

Sholom Secunda (1894-1974) was born in the Ukraine, but emigrated to New York City with his family in 1907. As a child, Secunda was famous in the Jewish community as a Wunderkind boy cantor. Once his voice changed, he became a prolific composer, logging more than 80 operettas and musical shows for the Yiddish theatre in the United States. Secunda is probably most famous for composing the 1940s hit Bey mir bist du sheyn, made famous by the Andrews Sisters3. Secunda also composed classical music.

In 1940, composer Secunda wrote music for a very popular stage musical called Esterke, based on a 1932 play by Aaron Zeitlin. Esterke was the retelling of a legendary tale about the love between Polish King Casimir and Jewish Esterke back in the Middle Ages. (It's a bit like the Purim tale from The Bible.) Zeitlin (1898-1973) was a journalist, poet and professor of Hebrew literature. For the musical version of his play, Zeitlin and Secunda, both all too familiar with the pogroms of Eastern Europe, and all too aware of what was going on in Poland at that very moment, wrote a song about it: 'Dos Kelbl', 'The Calf'. Most folksingers know the song as 'Donna Donna', and think it's much older than it is.

The song is about a poor calf, bound in a farmer's cart and headed for slaughter. Above the cart flies a bird. When the calf complains about its lot, the bird and the farmer show no pity, saying it's the calf's own fault for being a calf. To escape, he'll have to learn to fly. Nature itself is indifferent to the calf's plight:

As originally written, 'Dos Kelbl' is catchy, upbeat, with a happy-sounding chorus of 'dona, dona, dona...' a kind of Polish lilting. (Think 'dai, dai, dai'.) The stark contrast between the cheerful song and the miserable plight of the calf is the whole point. You're supposed to think: what's wrong with this picture?

Esterke was a big hit for the Second Avenue Yiddish theatre crowd, but Dos Kelbl got its second wind when the Folk Revival folks picked it up in the 1960s. Sung by the likes of Theodore Bikel, 'Dona Dona', as it was now known, found new listeners from among those who collected musical records of injustice. The song became part of the protest singer's repertoire, often in the trendified English rendition of Joan Baez. The Baez version isn't really a translation – it's an 'idealogically correct' update. In the original song, only those who naturally have wings are free. But in the popular '60s version:

Calves are easily bound and slaughtered
Never knowing the reason why
But whoever treasures freedom
Like the swallow has learned to fly.
– Joan Baez, 'Donna Donna'

In other words, join the Resistance. The next song on the programme might be something rousing, like 'Bella ciao'. Sympathy for cows goes only so far – unless, of course, you're a cowboy. But whoever heard of a Jewish cowboy?

One might first reply, 'A Jewish cowboy song? What about 'Do Not Forsake Me, Oh My Darling'?' The theme to High Noon was, after all, composed by a Russian Jew. But we can do better than that: we can find a genuine Texas outlaw cowboy singer of the Hebrew persuasion, namely Richard 'Kinky' Friedman. And examine what he wrote about the Holocaust and cows. But, first, a few words of caution.

Kinky Friedman – singer/songwriter, Peace Corps veteran5 unsuccessful gubernatorial candidate6, successful animal rescuer, friend of Willie Nelson, tequila and cigar tycoon7, hardboiled detective novelist, and all-around gadfly8   – is as Jewish as they come. And as Texan, being from the Hill Country. The band that made Kinky infamous, and caused a riot in Buffalo9 back in the 1970s, was called the Texas Jewboys. The name might sound offensive in New York, but country music fans mostly realised that it was a play on the Texas Playboys, another famous band. The Texas Jewboys' most popular song was 'They Ain't Makin' Jews Like Jesus Anymore', which should probably serve as a warning for what comes next.

Which is Friedman's hymn to the Holocaust, 'Ride 'Em Jewboy', a plaintive cowboy lament that has even been recorded by Willie Nelson.

Now the smokes from camps are rising
See the helpless creatures on their way...

The sadness is still overwhelmingly present in 'Ride 'Em Jewboy', and the reference to cattle... only this time, the Jew has become, not the calf, but the cowboy himself. He is marked for loneliness, 'when on your sleeve you wore the yellow star.' And he is driven 'relentless round the world.' Familiar cowboy motifs are here inverted to refer to the Shoah10. But there is hope in this song, for two reasons: as a cowboy, the Jew has agency denied to mere cattle – and it is an honest agency, not the unrealistic bravado of the partisan who thinks he can fly by claiming to be a swallow. The other reason for hope is the singing of the song itself:

In the window candles glowing
Remind you that today you are a child11,
Road ahead, forever rolling,
And anything worth cryin' can be smiled.

Is this complex country song effective? Is it true that 'anything worth cryin' can be smiled'? One could ask Nelson Mandela. According to Tokyo Sexwale, a South African activist and fellow-prisoner, Mandela had a copy of Friedman's album Sold American while in Robben Island prison – and listened to 'Ride 'Em Jewboy' every night for three and a half years. As Friedman said: 'They always tell you when you put out a record that you never know who will hear it.' As Seamus Heaney said:

No poem or play or song
can fully right a wrong
inflicted or endured.

But, as Heaney added, there is the chance of miracles, of gods speaking from the sky. Action begins with ideas, and the poets and composers (and cowboy singers) are the ones in charge of the ideas. Before answers can be found, there must be questions asked. What passing-bells for these who die as cattle? Perhaps the emotion generated by the sad laments of cows and cowboys is the beginning of the trail to the place where hope and history rhyme.

3For which he got paid a princely $15. And this was a major hit. In fact, 'Bei mir bist du schön' was even sung by the pro-Nazi German Bund in the US because it sounded like a German song. Luckily, in 1961 the copyright reverted to Secunda, who made a bit from the song after that.4Translation:

5Who wrote the song 'Wild Man from Borneo' to prove it.6He did get 12.6% of the vote in the 2006 Texas race.7Well, he sells them online.8In January, 2015, Friedman's jocular remarks about the bromance between the governor of New Jersey and the owner of the Dallas Cowboys caused much embarrassment for the ESPN sports network, but none for the unrepentant Friedman. ESPN simply said, 'We're sorry. What the hell were we thinking?'9At the university, feminists took umbrage at 'Get Your Biscuits in the Oven and Your Buns in the Bed'. Perhaps 'satire' wasn't covered in SUNY Buffalo English courses.10'Shoah' is another word for the Holocaust.11An indirect reference to the bar mitzvah ceremony in which it is said: 'Today you are a man.'