Irish Round Towers Content from the guide to life, the universe and everything 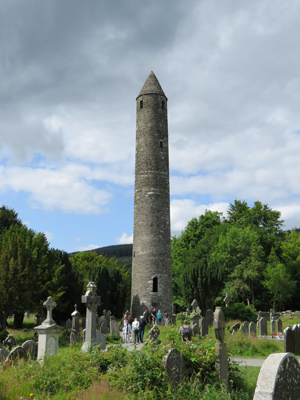 Irish Round Towers are distinctive mediaeval buildings which were erected in Irish monasteries between the 9th and 12th centuries. Made from grey stone, the towers are tall, slender, and as the name suggests, round. They have a distinctive conical top. They range from 20 to 34 metres in height and have a base between 4 and 6 metres in diameter.

Christianity in Ireland was based around independent monasteries until the arrival of the Normans at the end of the 12th Century. They brought a new model, with a hierarchy of bishops ultimately reporting to the Pope in Rome. Many of the monasteries were abandoned at this time, but those that survived were closed down during the reign of King Henry VIII.

There are 25 round towers still standing which are essentially complete, although only one, the tower in Clondalkin, Dublin, still has its original conical roof. Another 12 of these have had a new conical roof added to replace the original. There are also the remains of about 40 towers which are incomplete, ranging from only foundations to ruins which are still 28m in height.

The purpose of the towers is disputed. Generations of Irish school-children were taught that the round towers were used as refuges when the monasteries were being attacked by Vikings. The most important clerics could climb up into the tower, bringing the valuable gold items and illuminated Bibles with them, and pull the ladder up behind them.

There are a few problems with this. It is certainly true that monasteries were often attacked and plundered, although more often by the local Irish than by Vikings. But a tall, narrow tower is not the best structure for holding large numbers of people safely. Even if there are a number of internal floors, each can only hold a few people. The tower also acts as a chimney, so that if a fire is lit around the base, the upward draught will carry smoke up through the tower, killing anyone inside.

Some say that the great height of the towers allowed them to be used as lookout points to watch out for marauders. The windows in round towers, however, are generally narrow slits. They don't provide a great view - a flat top with a barrier wall around the edge would be far more practical.

The doorway to most round towers is high above the ground. It is thought that they were reached either by ladder or by wooden steps of which there is no longer any trace. While this appears to support the refuge theory, modern indications are that the high door was for structural reasons. Round towers have very shallow foundations - in one excavated case, as little as 60cm deep. To make them stable, the builders made the first two metres of tower above ground solid, that is with no hollow inside. This provided a solid base for the rest of the tower which was hollow, but also necessitated having the doorway raised.

Another suggested purpose for the round towers is as bell towers for the monastery. The Irish name for them is cloigtheach, literally 'bell house'. But early records suggest that this may be a corruption of cloichtheach, 'stone house', so it is far from clear.

Where to See a Round Tower

There are round towers dotted throughout Ireland. In almost all cases, there is no admission into the towers themselves; you'll just have to admire them from the outside.

In many cases, the tower is still standing but there is no trace of the monastery to which it was originally attached. In others, all the buildings except the round tower itself have disappeared, but there is still a high cross standing near the tower. High crosses were common features of monasteries and frequently survived long after everything else had disappeared.