The Battle Against Ebola Content from the guide to life, the universe and everything 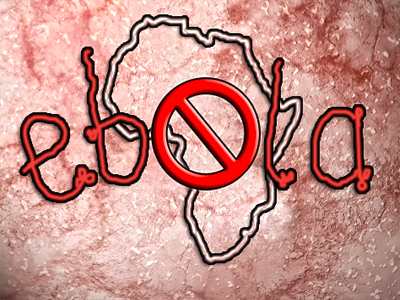 It was September 2014 when the western world woke up to the worst ever outbreak of Ebola. By then, known cases of the disease in West Africa exceeded 5,800 and were doubling every 16 to 30 days. The United States Centers for Disease Control and Prevention warned that without massive effort, there could be a million people with Ebola in West Africa by January 2015. Epidemiologists had been warning about the spread of Ebola for some time, but it took a while for the political establishment to realise it could have a global impact. So what is Ebola and why is it so dangerous?

There are five strains of the Ebola virus, the most dangerous of which is the Zaire Ebolavirus. This is the strain which caused the outbreak in West Africa in 2014. The virus is carried by fruit bats and other forest animals and people catch it if they have handled or been bitten by an infected animal. Cooking and eating bush meat can be a source of infection.

People who are infected develop sudden fever, muscle pains, weakness, sore throats, vomiting and diarrhoea. As the infection develops, kidney and liver functions deteriorate and external bleeding can occur. The virus is transmitted by contact with blood and other bodily fluids, not only on the patient but also on sheets, clothes and other surfaces. This means the people most at risk of catching the disease are health workers, who must wear protective clothing, including face masks and goggles, and change their gloves between treating patients.

When the outbreak began at the end of 2013, there was little treatment available for Ebola but patients could recover if they were given intravenous fluids early enough. These combat the dehydration caused by bleeding, vomiting and diarrhoea.

How Did it Spread?

The first known case of the current outbreak occurred in Guinea in December 2013. In the village of Meliandou, two year old Emile Ouamouno was suffering from a fever, headache and bloody diarrhoea. A few days later he died, followed by his three year old sister and their pregnant mother. Despite the distress of the family, Meliandou was too remote for the first cases to cause alarm more widely. Local health workers did not diagnose Ebola, as the early symptoms can be confused with those of other endemic diseases such as cholera and Lassa fever. The disease spread in health centres. Of the first 15 cases documented in the New England Medical Journal's analysis of the outbreak, four were medical staff.

When the virus reached Liberia in March 2014, poverty and lack of health care hampered the battle to control it. At the beginning of the outbreak there were only 60 Liberian doctors, and many of the best medical staff died of Ebola, leaving the remainder demoralised. In August 2014, the virus took hold in the capital, Monrovia, which is poor and overcrowded. Many residents live in slums strewn with rubbish and lacking access to sewerage systems. The French charity Medecins sans Frontières (Doctors Without Borders) opened an Ebola treatment centre with 120 beds in Monrovia and was immediately overwhelmed. By September, Liberia was reporting up to 500 cases a week.

One factor contributing to the spread of Ebola is the tradition of preparing the bodies of the dead by washing, touching and kissing them. In Sierra Leone, a traditional healer treated patients crossing the border from Guinea. When she died, her funeral infected a further 13 women. From here, Ebola spread to the capital, Freetown, where overcrowding and a mobile population allowed it to run out of control. Cases in Sierra Leone peaked at nearly 800 a week.

Stopping the Spread of Ebola

The first line of defence against Ebola is to isolate patients and practise good infection control. Initially, local people were suspicious of outside help and reluctant to send relatives to treatment centres. Many people died in their homes, infecting family members. However, as more treatment centres were built and information about Ebola was made available, the practice of quarantining sufferers became more successful. Burial teams made an important contribution. These teams, made up of local people, had to don protective clothing before they could go into houses where people were believed to have died of Ebola. They removed the bodies and buried them with as much dignity as possible. They faced taunting and even attacks from the people in their own neighbourhoods, who feared that they brought the virus back with them.

The most spectacular success in containing the virus came in Nigeria, the most populous country in West Africa. When an American-Liberian man, Patrick Sawyer, arrived in a hospital in Lagos, Dr Ameyo Stella Adadevoh diagnosed Ebola. She and her staff prevented him from trying to leave the treatment centre. This action prevented Ebola spreading in Nigeria, but cost Dr Adadevoh and three medical staff their lives, as they subsequently died of the disease.

However, attempts to impose wider quarantine precautions met with suspicion and hostility. In Liberia, the president, Ellen Johnson Sirleaf, quarantined West Point in Monrovia and Dolo Town, and imposed a night-time curfew as part of drastic measures to fight the disease. There was an outbreak of violence, when soldiers opened fire and used tear gas as they evacuated a local official and her family. The outbreak of Ebola brought Liberia close to breaking point.

There was a danger that infected travellers could spread the disease far beyond West Africa. As the virus can take up to 21 days to produce symptoms, it is possible for people to travel to another country and then become ill. Rich countries with well developed health systems should have the resources to isolate patients and prevent the disease from spreading. However, if travellers with the virus arrived in cities in the developing world, like Calcutta or Mexico City, the disease could infect many people.

However, the World Bank warned against general travel bans on people from affected countries. They argued that such bans would have a serious effect on the economies of these countries. The World Health Organisation's Ebola emergency committee said that bans would prevent the movement of health workers and resources. They argued that only people exposed to Ebola should be prevented from flying. Airports introduced screening for people arriving from countries in West Africa.

The West Gets Involved

In mid-September 2014, the United Nations called its first ever emergency meeting on a health threat. A resolution was passed declaring the epidemic a 'threat to international peace and security... which unless contained, may lead to further instances of civil unrest, social tensions and a deterioration of the political and security climate.' United Nations disaster relief experts set up a base in Accra, Ghana to co-ordinate international efforts to fight Ebola.

The US, UK and France sent troops to build treatment centres, train health workers and keep order. The US planned to train 500 health workers a week, although it was feared that not even this number would be enough to cope with the epidemic. In Britain, a call was put out for volunteers from the National Health Service to join the fight against Ebola. The first group included over 30 nurses, doctors, clinicians, psychiatrists and consultants in emergency medicine. However, the country that contributed the largest number of medical staff was Cuba. Their team of 165 people arrived in Sierra Leone in early October. These volunteers were well aware they were risking their own lives.

The Development of Treatments

Progress in developing drugs and vaccines against Ebola was slow, although some had been tested on animals. It was difficult to arrange field trials because outbreaks were unpredictable. In addition, pharmaceutical companies had little incentive to develop drugs against a disease only prevalent in poor countries. However, in early August 2014, two US missionary workers infected with Ebola were given an experimental drug called ZMapp, which had previously been tested on monkeys. They survived, but a Spanish priest given the same drug died. There were only limited supplies of ZMapp, which quickly ran out and the developer said it would take months to make a modest amount.

Another possible treatment is using antibodies from the blood of survivors of Ebola. This was among the approaches discussed at a two day meeting of experts assembled by the World Health Organisation in Geneva in September 2014. Although evidence for the effectiveness of antibodies from survivors was limited, it was felt the treatment was worth trying. The advantage was that there were thousands of survivors of Ebola in West Africa who could give blood. Either blood could be collected and processed for multiple patients, or a survivor could donate to an individual. In both techniques, blood has to be screened for diseases such as malaria and HIV.

Promising vaccines against Ebola were rushed from animal studies to human trials. One was produced by Glaxo Smith Kline and the National Institutes of Health in the USA. GSK inserted an Ebola gene into a weakened chimpanzee virus, which cannot replicate in the human body. Initial tests on 20 volunteers in America suggested the vaccine was safe and generated an immune response. Towards the end of January 2015, the first batch of vaccines was flown to Liberia.

By the third week of January 2015, an estimated 21,724 people had been infected by Ebola and 8,641 had died, mainly in Guinea, Liberia and Sierra Leone. The cost of the epidemic was enormous, not only in terms of loss of life, but also in damage to the economies of the three countries most affected. However, the number of infections was well below the worst case scenarios developed in the summer of 2014. Cases of Ebola were falling in all three of the countries affected. In Liberia, there were only eight new cases in a week. At the time of writing, it seems that the battle against Ebola is being won.

There is still a danger that Ebola will flare up again in West Africa. Even if it dies out in human populations, a reservoir will remain in wild animals, and new outbreaks could occur. We can, however, hope that the development of vaccines and effective treatments against Ebola would prevent another epidemic on the same scale. If Ebola returns, we should be better prepared.