The Trick that Fooled Churchill Content from the guide to life, the universe and everything 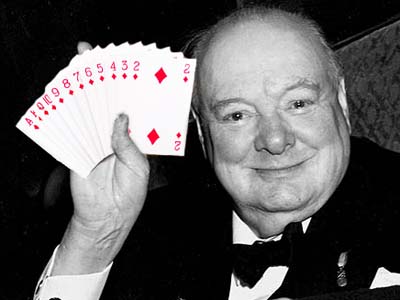 One of the most simple yet mystifying card tricks is the one which magicians know by the name 'Out Of This World'. To perform it requires nothing more than a standard deck of playing cards and a volunteer.

Only seeing the backs of the cards, the volunteer will proceed to guess which cards are red and which ones are black. The magician will reveal at the end that every one of his guesses was correct, and so he must have some form of psychic power.

According to magicians, the trick was once famously performed on British Prime Minister Winston Churchill.

View From the Audience

You are the volunteer. The magician picks up a deck of playing cards and explains that without seeing their faces you are going to guess whether each card is either black or red. He demonstrates this by guessing a couple himself or asking other members of the audience to - perhaps unsuccessfully. After this practice demonstration he has four face up cards, two black and two red.

About half way through, the magician tells you that your thinking may be influenced by being a left-handed or right-handed thinker. To redress this balance, he places the unused face-up black card from the original demonstration on the red pile, and the unused red card on the black pile. He then asks you to predict the colour of the cards as before, but this time you place the red cards on the right and the black cards on the left.

When all the cards have been sorted, the magician picks up the cards on the left and turns them over. The cards you believed were red are indeed all red, and those you later predicted were black are black.

You yourself turn over the cards on the right hand pile. Again, they have been correctly sorted as you predicted.

How He Does It

The magician needs to do two things in this trick.

First, he needs to prepare the pack in advance. The first four cards at the top of the pack must have each of two red and two black cards. The next 24 cards must be all black and the final 24 all red.

The switching of the two halves of the pile requires an element of distraction, but so long as it's done naturally and smoothly, it shouldn't be noticeable; the volunteer is busy thinking about his own pile.

The legend associated with this trick is widely documented. Churchill was supposedly attending a wartime dinner party thrown by some of his friends, who also invited the magician Harry Green. The trick was performed on Churchill, who incredulously insisted it was repeated five more times. It is said that it delayed his attendance at a late session of Parliament.

An account of the event has been written up in Magician's Magic, a book by Paul Curry, who is credited as having created the trick. No other evidence exists for the encounter, however. Curry's piece has all the incidental details you would expect from a tale handed down between magicians, from Winnie's after-dinner cigar to the reports of him arriving at Parliament in a 'befogged' state. Nevertheless, it serves well as a magician's preamble to warm up an audience.