The Boscombe Police Box, Dorset, UK Content from the guide to life, the universe and everything 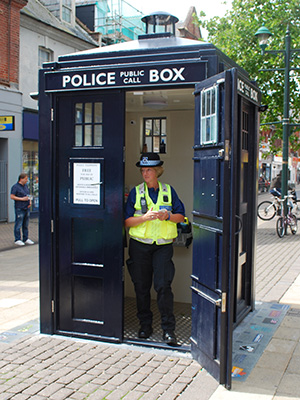 In the early 21st Century, the village of Boscombe in Dorset suffered from several severe problems. Engulfed by the conurbation that is the suburban sprawl of Poole, Bournemouth and Christchurch, it was always in the shadow of its larger, more prestigious neighbour, Bournemouth, and is often considered the area's downmarket district. Road trains1 ran rampant through the pedestrianised shopping precinct. Bobbies on the beat had nowhere to enjoy a nice cup of tea or to store their toy Daleks, local businesses had no worthwhile projects to sponsor and, most serious of all, Doctor Who fans had nothing exciting to photograph or gaze in wonder at while out shopping. Fortunately all of these problems would be solved by the erection on 8 April, 2014, of the Boscombe Police Box.

What is a Police Box?

Police boxes' popular design encompassed two different functions: shelter and communication. Their origins are lost in the dawn of time, with many guards and watchmen having dedicated huts, kiosks and sentry sheds in which to shelter from the elements, store their equipment and even be a fixed point where members of the public knew they might be found. By the end of the 19th Century, many cities worldwide had installed communication equipment in these boxes, including Chicago and Glasgow, or had provided police pillars and posts in which to house phones, including in London.

London had a police box in Cricklewood in 1897, there were 30 in the capital by 1907, but it was not until 1928 that a scheme to widely adopt the London police box was agreed. In 1929 22 boxes designed by Architect and Surveyor to the Metropolitan Police, Gilbert MacKenzie Trench, were erected and made from cast concrete with a teak door. These kiosks allowed the police to enter inside the box, while providing members of the public with access to a telephone housed behind a door in a separate cupboard that was opened from outside. A flashing light on the top was used as a signal to inform the bobbies near the box to use the phone to contact their headquarters. This design inspired the design of the TARDIS, the Doctor's time machine in science fiction television programme Doctor Who.

By 1936 there were 580 police boxes in London, and they proved their worth as air-raid warning sub-stations in the Second World War. In 1937 the 999 emergency phone service was introduced, meaning that members of the public could phone the police from their own homes rather than having to go to the nearest police box. By 1953 there were 685 police boxes on the streets of London, with 750 at the height of their popularity, though their days were numbered. By 1969, all policemen in London carried personal radios, and headquarters no longer needed to use a flashing light on a box to get a constable's attention. With maintenance costs high, the police boxes were closed and the last official box in London was removed from the Barnet Bypass in 1980. One survives in the National Tramway Museum in Crich, Derbyshire.

In 1996, a new police box was opened in Earl's Court2, the same year that the BBC successfully applied to the Patent Office for the right to trademark the police box design used as the basis for the TARDIS since 1963 when it was found that the police had never registered police boxes as a trademark, and they had not been used by the Metropolitan Police for decades.

In Boscombe in the early 21st Century, the shopping precinct had suffered from anti-social behaviour and disorder, gaining the area a reputation for drug-related crime. Traditional police methods were felt to be ineffective. Boscombe Partnership and Regeneration Officer Sergeant Chris Amey stated:

We've had officers on a patrol, we've got a community van that we introduced to the precinct on a Thursday and a Saturday, but we wanted something more permanent that was going to fit in with the area, something a bit quirky that would draw people in. My boss Inspector Chris Weeks and I were previously officers with London's Metropolitan Police and knew about the Police Box outside Earl's Court tube station. We knew... that it attracted loads of visitors every day. Chris wanted a fixed point, and I said, 'What about a police box?' That's how it came about.

...Building a police box in Boscombe has been a lengthy project which began in May 2011 and has seen years of hard work, dedication and support to make it a reality... We spoke to the curator [of the Metropolitan Police's Historic Collections building] and got the plans for the 1929 police box, then got together with architect James Roberts... I don't think anybody has built a police box out of steel before. We wanted it to be steel as it needed to be robust. It could be a target for people, so we wanted it to stand the test of time.

In June 2013, permission for the police box's erection was granted and a budget of £30,000 agreed. The funds were raised by local businesses donating £1,500 each. They were thanked by having their names engraved in a paving stone.

Local company AMK Industries Limited constructed the box out of steel, possibly by using a sonic screwdriver3. The box is three metres high, 1.8 metres wide, and weighs over two tonnes. The steel frame was cut in January 2014, shortly after Doctor Who's 50th Anniversary. The police box is located outside the Post Office at the western end of the precinct on Christchurch Road. It has attracted people from far and wide, with visitors on the opening day reported to have come from as far as Japan just to see the box. As a boost to local tourism, it also marks the spot where the road train stops in the town centre, allowing tourists to disembark to see the box.

The MP for Bournemouth East, Tobias Ellwood, described declaring the box open with the words:

The box itself is now a fantastic, iconic symbol of a desire by the police and the community to be very optimistic about where this part of Bournemouth is going. It is not only now a tourist attraction in its own right, one of the few boxes operating in the country, it will also be manned in the evening by police officers and have a telephone linked straight to the police as well. It's both symbolic and functional. Unveiling the box I couldn't help but notice that many in the crowd were dressed up as 'Doctor Who' figures - there was even a Dalek there.

The police box is fully equipped with a bright yellow phone for 24-hour public use, as is traditional, behind a white sign labelled:

More than a historic artefact, the box also contains things needed by the 21st Century Constable; a wi-fi connection, information screen, heater, desk, first aid kit, defibrillator, toy Dalek and a big red button to switch the blue light on the top on, to entertain the kids. Unlike the TARDIS, it does not appear to have a time rotor or contain the Eye of Harmony. Similarly, the Police Box is not coloured TARDIS blue, but the darker black-blue colour that the boxes were originally in 1929.

Now only the second of two operational Police Boxes in the country, it is used both by police and Community Support Officers.

And you never know, one day it may even be visited by a Time Lord.

1A road train does not follow a track but instead is a tourist attraction shaped like a train locomotive that pulls passenger carriages, often found in coastal resorts.2This police box was mentioned in Doctor Who episode 'The Bells of St John' and is well worth looking at with Google Maps.3The Doctor's multi-purpose tool in Doctor Who.