The Earl's Court Police Box, London, UK Content from the guide to life, the universe and everything 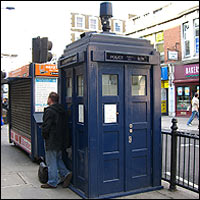 Visitors to London should take time out to get down to Earl's Court. It's a thriving centre for shopping and bars, but more importantly, there's a big blue police box outside Earl's Court Tube Station that looks an awful lot like the TARDIS that Doctor Who cavorts about the universe in! It is of course a modern-day equivalent of the traditional blue GPO police signalboxes that were once commonplace throughout the British Isles.

Appearing Out of Thin Air?

Large, dark blue and topped with an electric blue light, police boxes were designed as specialised telephone kiosks for the London Metropolitan Police during the 1930s. Containing a telephone linked directly to a local police station, it could be used by 'bobbies'1 on the beat to report their whereabouts back to their superiors, while the flashing blue light would indicate that they were required to use the box to contact their station. The public also had access to the telephone on the outside of the box, enabling them to get in touch with the police rapidly, and by 1937 the blue boxes were a familiar sight. The earlier police boxes were made of wood, but later models used concrete, making them akin to meat-freezers in the depths of the English winter. However, they played an important role in the work of the police until 1969, when they were gradually phased out of service due to the introduction of personal radios.

Inside a Police Box

Unlike their quirky cousin the TARDIS2, police boxes were definitely not larger on the inside than the outside! A locked door, the key to which was kept by the beat officer on a chain in his pocket, protected access to an interior that normally contained (for the exclusive use of police officers for breaks and respite from the trudge of the beat): a stool, table, brushes and dusters, a water-based fire extinguisher and a small electric fire. The latter was intended to give some warmth during the bitter winter months, but more often than not was used to dry damp socks, which it did with consummate inefficiency.

Unveiled by the then Mayor of Kensington and Chelsea, Paul Warwick, outside Earl's Court Underground Station on Thursday 18 April, 1996, the new modern police box was intended as a joint safety project, and was built by the London Underground's Lillie Bridge Works from designs supplied by the Metropolitan Police. Installed to enable the public to contact local police at the touch of a button, it also has a CCTV camera (which can be seen poking out from under the electric blue light on top), digital imaging equipment, a public telephone linked directly to a police switchboard and another camera that photographs all users to deter hoax callers. There were plans to distribute similar boxes throughout London as hi-tech surveillance units, but this idea was later abandoned.

To get to the Earl's Court Police Call Box when in London, take the London Underground to Earl's Court Station, using a District Line train. Disembark at Earl's Court, then follow the exit to Earl's Court Road from the platform up a relatively steep flight of stairs. The 'TARDIS' is situated just outside the entrance to the station and is incredibly hard not to notice. There is a newspaper stand on its left as you face it from the station, and over Earl's Court Road are a number of banks, eateries and convenience stores.

A warning though, Earl's Court is full of Australians on the lookout for the nearest 'Walkabout' bar or anywhere to get some Vegemite or a 'stubbie'3. If accosted, just smile and point vaguely up the road. There are also the occasional Doctor Who fans having many pictures taken standing in front of the police box, either dressed in costume or wearing their fan T-shirts with pride.