Hats in Doctor Who: The Eleventh Doctor Content from the guide to life, the universe and everything 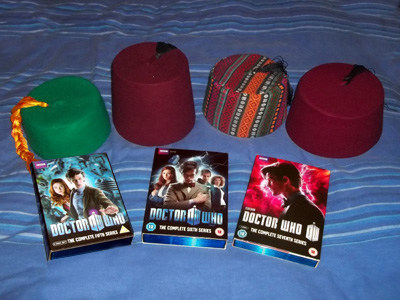 Right then, I have questions, but number one is this: what in the name of sanity have you got on your head?
- River Song, 'The Big Bang'

Throughout the history of Doctor Who, the main characters have worn a variety of headwear. Perhaps the Doctor to date with the most enthusiasm for hats is the Eleventh Doctor, played by Matt Smith. Though other incarnations wear a hat more often, they do not display such affection for their headwear. In his early days the Eleventh Doctor is remarkably self-restrained and free of his developing fondness for hats. In 'The Eleventh Hour' he commandeers a fire engine, but does not wear a fireman's helmet. He is given his first item of headwear, Liz 10's antique air-balanced porcelain mask, in 'The Beast Below'. He studies it before learning the truth about the Beast Below and is given it as a gift shortly before leaving Starship UK, but never wears it or even lifts it up in front of his face.

The first episode in which we see the Eleventh Doctor wearing a hat is the series five1 finale, 'The Big Bang'. Here he is seen wearing a fez and carrying a mop. The Doctor steals the fez from an exhibit at the fictional 'National Museum', and a fondness for fezzes is born. Just like that.

Sadly this first, presumably historic, fez doesn't last long before it is destroyed. It is completely disintegrated by River Song, aided and abetted by Amy Pond, neither one appreciating the Doctor's dress sense. This is a shame as River enjoys a bit of fancy headgear herself, happy to wear Egyptian headgear when impersonating Cleopatra in 'The Pandorica Opens'.

Having discovered the joy of hats, by the end of the episode the Doctor is seen in another, a top hat, which he wears to Amy and Rory's wedding reception. Soon after in the following episode, 'A Christmas Carol', the Doctor is seen in three different hats; the now obligatory fez, a red Christmas hat2 as well as the paper hats associated with Christmas crackers. A portrait of him wears a crown in 'The Impossible Astronaut', an episode in which he not only wears a fez but also a Stetson (a gift from Craig Owens which is shot off his head by River) and even an Apollo moon mission space helmet. He returns to wearing a Stetson in 'A Town Called Mercy'.

His love of hats continues with a serious case of hat-envy in 'The Curse of the Black Spot'. Here he wears a tricorn pirate hat. Having developed a hat habit, he is soon seen wearing a cowl in order to disguise himself as a headless monk in 'A Good Man Goes to War'. When informed he has half an hour left to live having been poisoned by River Song in 'Let's Kill Hitler', the Doctor prioritises by dressing up and wearing a top hat.

Despite this, the Doctor does not always get it right. Following his fez, he makes a fashion faux pas by wearing a space helmet backwards in 'The Doctor, the Widow and the Wardrobe'3. In the same episode he is determined to wear a circlet crown despite the forest warning him not to.

His hats often reflect his mood. When in 'The Snowmen' he wishes to live a solitary life, not interfering in the lives of others or helping those around him, he wears a very Dickensian top hat similar to styles worn by Ebenezer Scrooge. When his mood changes and he starts investigating events his headgear changes to a deerstalker4, the hat popularised by detective Sherlock Holmes5, though not featured in Conan Doyle's stories.

Hats worn by the Doctor also indicate the mood of the story. In 'The Crimson Horror' the Doctor wears a bowler hat. This episode starred Dame Diana Rigg, whose Avengers co-star John Steed wore a bowler hat. The episode, involving a sinister English village and a plot to destroy the world, shares similarities with a typical Emma Peel-era Avengers episode.

Hats can be useful tools. In 'The Bells of St John' a fez is used to collect money from passers-by, who consider the TARDIS' arrival in London to be a street performance magic trick. This enables him to collect enough money to buy breakfast for himself and Clara. The Doctor also wears a helmet when riding his anti-grav motorbike.

In 'The Day of the Doctor', the method by which the Eleventh Doctor first contacts both the Tenth and War Doctors is through the medium of a fez thrown through a time vortex. It is the fez that brings them together to face a common enemy.

It is not only hats that the Doctor wears on his head. He adopts Amy Pond's reading glasses as his own after he loses her. He wears a respirator in 'Journey to the Centre of the TARDIS' and in 'The Time of the Doctor' the Doctor wears a wig in order to smuggle a TARDIS key onto the planet Trenzalore.

If the metal remains of a Cyberhead can be considered to be a hat, then hats can fight back. In 'The Pandorica Opens' a Cyberhead, the metallic remains of a Cyberman head whose previous organic occupant had long rotted away, attacks Amy Pond, wishing to engulf and enslave her, a fate almost shared by Craig Owens in 'Closing Time'.

Handles: The Hat with Heart

One of the Eleventh Doctor's longest companions is a hat. The Doctor adopts a Cyberhead he nicknames 'Handles'. Handles is his constant companion in the town of Christmas on the planet Trenzalore for 300 years. After newly regenerating into the Twelfth Doctor, in his initial post-regeneration confusion he calls Clara 'Handles'.

The Doctor wears a fez in the following episodes (episodes in which fezzes are mentioned, but do not appear, are in italics):

A fez also appears in 'Death is the Only Answer', a special minisode written as part of a schools' writing competition. Here it is revealed that the Doctor's fez was previously owned by Albert Einstein, who wants it back.

Here is a selection of hat-related dialogue from the series. All quotes are by the Doctor unless otherwise stated:

This console is the key to saving that ship or I'll eat my hat, if I had a hat. I'll eat someone's hat, not someone who's using their hat.
- 'A Christmas Carol'

I wear a Stetson now, Stetsons are cool.
- 'The Impossible Astronaut'

I'm going to need a SWAT team ready to mobilise, street-level maps covering all of Florida, a pot of coffee, 12 Jammie Dodgers and a fez.
- 'The Impossible Astronaut'

Still, anything beats a fez, eh?
- Rory, 'The Girl Who Waited'

Doctor: I can't see! I'm blind!
Madge: Oh no, love, you're not. I think you've just got your helmet on backwards. How did you manage that?
Doctor: I got dressed in a hurry.
- 'The Doctor, The Widow and the Wardrobe'

[The Doctor examines a Stetson with a bullet hole:]
Doctor: Ah, well, he wasn't a very good shot, then.
Isaac: He was aiming for the hat.
Doctor: He shoots people's hats?
- 'A Town Called Mercy'

Smart bunch, Time Lords. No dress sense, dreadful hats, but smart.
- 'Journey to the Centre of the TARDIS'

That's a time fissure, a tear in the fabric of reality! Anything could happen! For instance... a fez...?
- 'Day of the Doctor'

Clara: Some day you could just walk past a fez.
Doctor: Never going to happen.
- 'Day of the Doctor'

1Recent Doctor Who series are numbered from the return of the show in 2005, rather than when production first began in 1963. Series five was first broadcast in 2010.2Amy is first seen praying to Santa for help, only for the Doctor to come to the rescue. In 'A Christmas Carol', the Eleventh Doctor is later revealed to be a friend of Santa, aka Geoff, so was her prayer heard and answered?3He would learn how to wear a space helmet correctly by 'Hide'.4The fourth Doctor had worn a deerstalker in 'The Talons of Weng-Chiang' (1977), another story set in Victorian London.5Steven Moffat is the showrunner of both Doctor Who and Sherlock.