Mad Jack Fuller and the Belle Tout Lighthouse Content from the guide to life, the universe and everything 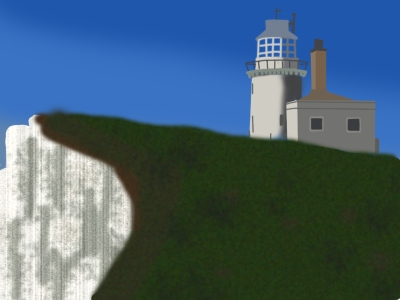 Bad weather can be an expensive proposition. Nobody knows that better than a maritime country like the UK, and many are the tales of shipwrecks caused by sudden storms. On 3 February, 1822, bad weather caused the outward-bound Indiaman Thames to run aground at Beachy Head near Eastbourne. By the time workers got her off, the cargo was ruined – and had to be sold on the spot, at great financial loss. Something needed to be done about it.

The obvious solution was to build a lighthouse, and equip a lifeboat crew. That sort of initiative requires funding. Who does one call in such an emergency? A solid, conservative, respectable citizen? Or a nut with money and vision?

They called 'Mad Jack' Fuller, the squire of Brightling.

Who Was 'Mad Jack', and Why Did He Build Pyramids?

John Fuller (1757-1834) didn't enjoy the moniker 'Mad Jack'. He preferred to be called 'Honest John', as who wouldn't? But the unflattering name stuck, largely because he did such odd things. Fuller belonged to a wealthy family1   – his Uncle Rose died and left him a fortune from his plantations in Jamaica2. At 20, Fuller became the owner of Rose Hill, an estate in Brightling, Sussex. In 1798, he became High Sheriff of Sussex. Fuller was a man of influence – and most of the time, his remarkably heavy drinking did not stand in the way.

Fuller served as an MP, off and on, during the 18th and early 19th centuries. On 27 February, 1810, he was bodily ejected from the Houses of Parliament after an altercation with the Speaker became physical. Fuller was publicly disgraced by this incident, but made a comeback. He continued to exert a strong influence on civic life all his days, not only in his native Sussex, but also on a national level. And Fuller did not confine his interests to politics. He was a friend and mentor to Michael Faraday, pioneer in electromagnetism. In fact, Faraday became the first Fullerian Professor of Chemistry at the Royal Institution of Great Britain, courtesy of John Fuller.

The girl Fuller courted refused to marry him3, and Fuller never married. Instead, he made his bid for immortality another way: by building things. Fuller's 'follies' – clever, pointless buildings – are well-known tourist attractions. The pyramid mausoleum he built for himself in the churchyard of St Thomas à Becket Church satisfactorily annoyed the vicar4 and secured Fuller's place in the history books.

Fuller may have done many things on a whim – after all, it is said that he built the Sugar Loaf, a lookout point, to win a bet that he could see Dallington Church from his estate. But Fuller had witnessed the Thames disaster. This time, he put his money and influence to good use. And he changed the British landscape, just a little, in a way that even the vicar might have approved of.

'Belle Tout' is named for Bael, the Celtic god of war. (Why not?) The name means 'Bael's Lookout', although whether the ancient woad-wearing Britons would have recognised this nod to their mythology is moot. Sussex was a progressive sort of place now. The first lighthouse, a wooden structure, went up in 1828. The granite and limestone building first cast its light on 11 October, 1834, and could be seen for 22 nautical miles. By then, Mad Jack had passed on. It is left to the metaphysically-inclined to speculate whether Jack's spirit could see the lighthouse from atop his Brightling pyramid.

A Beacon in Trouble

From the beginning, Belle Tout was expensive to maintain. Its 30 lamps used two gallons of oil every hour. In addition, there were worries about the thickness of the fog up on top of the hill, and dangers of erosion in the chalk cliff Belle Tout sat on. All in all, maybe the lighthouse was a Fuller folly. In 1902, Belle Tout was decommissioned, replaced with a more practical structure at the bottom of the cliff. Sic transit gloria mundi5.

In 1903, the lighthouse was sold off. It changed owners several times. During World War II, Belle Tout stood forlorn and abandoned, the unfortunate victim of stray Canadian artillery fire. After the war, the Council had had enough of all this vandalism, and bought the building. They rented it out as a film location, and the lighthouse got a new lease on life. From 1996 to 2007 it was a private home. Now, Belle Tout is a well-visited bed and breakfast.

Belle Tout is famous, having appeared in a James Bond film, The Living Daylights, become the title of a rock song (by the Subterraneans), and been redecorated on television by Laurence Llewelyn-Bowen.

Mad Jack would be proud. However, the eccentric building planner might also be the first to notice that Belle Tout is not where it used to be. It's been moved   – by 17 metres. In 1999, this amazing engineering feat was accomplished to save the lighthouse from falling down the cliff due to erosion. And there it still stands, safe and sound.

You can read about the short-lived Belle Toute (sic) Lighthouse Preservation Trust. Unfortunately, the Trust failed to receive sufficient support to keep going.

Have a free weekend, and want to pop over to Brightling? Here's a walking tour designed by Alan Smith.

Would you like to spend a night up on Beachy Head, listening to the surf and meditating on Mad Jack's contributions to society? Here is how to contact the Bed & Breakfast.

1Both of Mad Jack's parents were named Fuller, before they got married.2Owning plantations in Jamaica made you ipso facto a slaveholder in those days. Fuller staunchly defended slavery, asserting that West Indian slaves often lived in better circumstances than many English people. Whether that fact, being true, was necessarily a recommendation, is open to debate.3Perhaps she had heard about the drinking.4What annoyed the vicar even more was Fuller's support of the Fuller's Arms, a local pub. When the vicar fought to close it down, irked that it was directly across from the church, Fuller helped the owners set up a new pub down the road. The Fuller's Arms still did better business than the church.5This means, 'Thus passes earthly glory.'