'The Children of the Stones' - the Television Series Content from the guide to life, the universe and everything 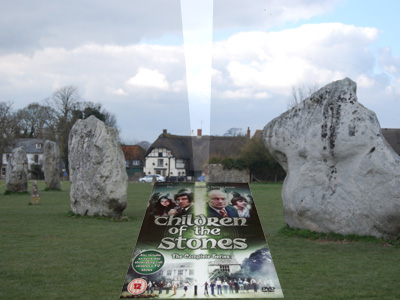 The Children of the Stones is one of the scariest children's dramas of the 20th Century. Made by HTV in 1977, the series was filmed on location in Avebury, a small English village located within Europe's largest stone circle. Blending fiction with Avebury's true history ensures the series feels hauntingly authentic.

What links a 4,000-year-old stone circle that completely encompasses the village of Milbury and the strange, docile behaviour of the inhabitants? Why are seemingly dim-witted sons of farmers able to so easily comprehend challenging mathematical equations? Why was the ancient Neolithic stone circle built to commemorate a supernova, and still perfectly aligns each night with a black hole? What is the relevance of the number 53?

Time's cycle encircles the heroes, and sinister forces leave audiences petrified as characters we've come to care about are turned into stone.

Professor Adam Brake and his teenage son Matthew arrive in Milbury, where Adam, an astrophysicist, intends to study the surviving 53 stones of the Neolithic stone circle that completely surrounds the village. They soon befriend other new arrivals, including Margaret the village's new museum curator, and her daughter Sandra, and notice that the native villagers behave rather oddly. At first they assume it is a merely local custom to greet each other with 'Happy Day' rather than 'Hello' and hold constant Morris Dances, but there is no denying that the villagers, or 'Happy Ones', as they call themselves, are inhumanly placid and docile. The only one seemingly unaffected is local poacher Dai, a half-crazed tramp who lives in perpetual fear in a nearby barrow known as the Sanctuary.

The villagers' behaviour becomes more and more inexplicable, including chanting in bizarre night-time ceremonies and holding hands in a circle around the home of Professor Hendrick. It was Hendrick who discovered the black hole after reading an eye-witness account, written by a priest of the stone circle, of the supernova that created it. Yet soon more and more people change overnight, joining in the ceremonies and becoming Happy Ones, until only Adam, Matthew, Margaret and Sandra are left.

Just as nothing, not even light, can escape a Black Hole, soon Adam and Matthew realise they cannot escape the stones. For the cycle is coming 'Full Circle'…

The series saw Gareth Thomas in his first starring role, and after the success of The Children of the Stones he was cast as Blake in classic BBC science-fiction series Blake's 7. Peter Demin, who played his teenage son Matthew Brake, was best known as being the Cadbury's Curly Wurly Kid in a series of adverts.

The Children of the Stones was a children's television drama made by HTV, a television company which held the ITV franchises for the Wales and West regions. Part of their remit was to make regionally relevant television, and so when HTV made children's television they used a lot of location filming to address this, taking full advantage of their region's unique landscape. So for instance, 1975's children's drama Sky had scenes filmed in Glastonbury Tor, Stonehenge and Avebury, and had been script-edited by Trevor Ray.

The writer Jeremy Burnham1 had previously worked with Ray, so it was natural for them to collaborate to create a new series for HTV. Together they wrote the outline for the seven-part serial, which they presented to producer Patrick Dromgoole. Dromgoole considered the story to be:

A very complicated story about time and the repeating of time, very difficult to follow

and thematically similar to cult classic The Wicker Man, only with a stone circle rather than a satanic island. Rather than patronise the younger audience, The Children of the Stones is complex, layered, and concerns not only the events of today but also hints at previous cycles of its Stone Circle.

The series goes to great lengths to ensure that it feels genuine. A scientific consultant, Dr Peter Williams, was hired and the details concerning the fictional history of Milbury closely match the real village of Avebury, where the series is set. The entire series had only one director, Peter Graham Scott, to ensure an even texture, vision and style, giving the series the feel of an unfolding eerie mystery.

The creepily unnerving music was composed by Sidney Sager with foreboding vocals performed by the Ambrosian Singers. These spine-chilling sounds set the menacing mood, drawing viewers in at the start of each episode.

ITV were so confident of the show's success even before filming began that the writers, Burnham and Ray, were commissioned to write a novelisation of their script. This was published in 1977 and tied in with the original series' showing. As the novelisation was published early, it was unable to contain pictures from the television serial; the cover instead concentrated on the stones themselves. A sequel novel, Return to the Stones, was later published, written solely by Burnham.

The series was successful enough on first broadcast in 1977 to be repeated in 1978, and was also broadcast in America in the early 1980s. It was first released on VHS, in a condensed, edited form, in 1981 – one of the first British children's television programmes to be available for home viewing. In 1990 it was in the top 20 of 'Favourite British Telefantasy Series'. In 2003, it was considered the '76th Scariest Moment' in Channel 4's The Top 100 Scary Moments, a poll that included all horror films made to date.

There are numerous similarities between the fictional village of Milbury and the real, historic World Heritage Site that is Avebury.

The fictional Milbury is situated in a Neolithic stone circle consisting of 53 stones that surrounds the village. The village, and its 53 residents, is set entirely within the stone circle, and notably contains a museum, manor house, abandoned church built on the site of an earlier pagan temple, a little post office shop that sells ice creams and postcards, and a pub. In addition to the main circle, the serpentine Avenue of a double row of stones leads from the circle to a related Neolithic area known as the Sanctuary.

The Stone Circle is located above a natural, but hidden, bowl-shaped formation. Buried deep beneath the ground, it lies secret and undetected, waiting to act as a cosmic antenna dish, pointing to the heavens. Each of the 53 stones connects with a ley-line2, focusing cosmic forces to the circle. At the heart of the circle is the manor house, in the centre of which lies a circular stone table.

One of the museum's key displays is the body of the Barber Surgeon, a man who died while trying to bury and destroy the stones. He carried a broken artefact to ward off evil that later perfectly matched one broken by Dai. Another feature nearby is an artificial hill. Earlier villagers had tried to bury or destroy the stones, one each year, in order to keep evil at bay.

Avebury is a village in Wiltshire which contains a 9m deep ditch, a Henge and a stone circle over three quarters of a mile in circumference, enclosing an area of 28 acres. The Outer Circle of Avebury once had 100 standing stones, with a further 60 stones in two stone circles inside it. These date from around 2,400BC. Today 36 stones are in position; 15 remained in place and 21 had been buried or fallen over until restored to their original positions by archaeologist and owner Alexander Keiller in the 1930s.

The artificial hill outside Milbury was actually Silbury Hill, Europe's largest prehistoric mound, which inspired the name of the fictional village. The Sanctuary seen in The Children of the Stones was actually the West Kennet Long Barrow, built around 3,700BC. The real Sanctuary was a double stone circle at the top of Overton Hill3, 1½ miles from Avebury at the end of the Avenue, a wide, processional path flanked by approximately 50 pairs of tall stones. Avebury, too, has the body of a Barber Surgeon on display, who is believed to have died in the 1320s when burying a stone. His believed profession was identified as he carried one of the earliest surviving pairs of scissors in Britain.

The National Trust, who demolished many of the buildings in the circle in the 1950s, owns the Avebury stone circle. There remains a small Post Office and the Red Lion pub in the village, the same pub seen in the television series. In reality, the Church of St James, the Alexander Keiller Museum and Avebury Manor are located just outside the stone circle.

The series is extremely well made and still haunting today. While there is no denying that the villagers in their denim are unmistakably in the 1970s, the seamless location filming gives the story a gravitas that comes from seeing the series take place in and around a genuine stone circle. The series is layered, with the mystery of what is happening around the Brakes drawing to a climax as they learn more about the events that led to the creation of the Stones. The weathered and battered stones of the circle itself perhaps play the scariest character of all.

Everything and every moment in the series seems to be of the utmost importance, adding to the uncanny atmosphere. Does Matthew's bicycle accident symbolically prophesy his need to break the cycle? Was everyone inside the circle called and chosen by the Stones? Are there any coincidences? How can half an amulet broken in the present day perfectly match the historic remains of the Barber Surgeon's amulet?

Perhaps the biggest puzzle of all is the painting that Matthew found before coming to Milbury, both a frighteningly dramatic recreation of the past and a prophetic warning of the future. It shows 53 people at Milbury holding hands in a satanic ritual, summoning an all-powerful force that turns the worshippers into the stones, with only two survivors fleeing towards Sanctuary.

As the Stones prevent all those inside the circle from leaving Milbury, and the villagers become possessed, it seems impossible that our heroes can escape, leaving us unsure whether their fate is to be turned into zombies or stones.

The series has had a lasting impact on television, especially television aimed at children and family audiences. The year after its transmission, Doctor Who story 'The Stones of Blood' featured a mysterious 3,000 year old stone circle. In the late 1980s, eerie Moondial attempted to recreate the same atmosphere. 1993's Century Falls covered much of the same ground, featuring a remote rural village whose inhabitants attempt to re-summon a power that had destroyed them in the past. Even in the 21st Century the story's legacy continues to be felt, for example in The Sarah Jane Adventures adventure 'Secrets of the Stars', astrological forces hypnotise and possess people on Earth.

1Burnham had written episodes of The Avengers and Hammer'sThe Horror of Frankenstein. His wife, Veronica Strong, plays Margaret.2Ley-lines are theoretical alignments connecting ancient religious sites that are said to generate mystical spiritual energy. Ley-lines are believed to be detectable by dowsing.3Overton Hill is the start of the Ridgeway National Trail, an 85-mile route that is one of Europe's oldest roads.