Ex-pats Guide to Making Christmas Mincemeat Content from the guide to life, the universe and everything 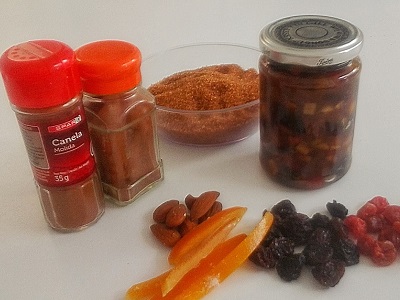 If you're far from home, with no hope of returning before Christmas, you may suddenly feel a pang of nostalgia. You may remember some of the traditional foodstuffs of the season and wish you had the wherewithal to obtain them. If you're longing for mince pies, then this Entry is for you. It explains how to make your own mincemeat, even when the traditional ingredients cannot be bought in your local shops.

The mincemeat will be ready to use within two days of finishing making it, but it will store for a long time.

Present day mincemeat, the stuff that forms the sweet inners of a British mince pie, is almost, but not always suitable for vegetarians. The traditional recipe does call for suet, as shredded white fat, stirred into the mixture to give a glossy unctuous texture. However, most commercial mince pies are now made with vegetarian suet substitute. The recipe below uses butter.

The origins of this sweet pie, now eaten either as a dessert or as a sweet snack usually accompanied by a glass of sherry or mulled wine, date far back in time. A recipe from 1609 included minced cooked mutton, beef suet, currants and raisins with mixed spices, orange rind, salt and a small amount of sugar. Meat no longer forms part of the ingredients in a modern mince pie.

...and another year he wrote: 'Lay pretty long in bed, and then rose, leaving my wife desirous of sleep, having sat up till four this morning seeing her mayds make mince pies.' 25 December, 1666. 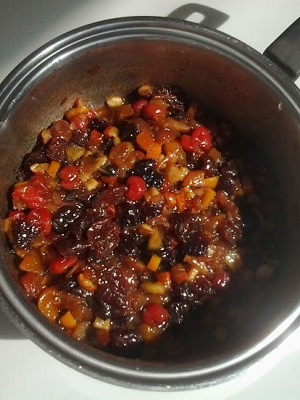 Traditionally this is a mix of currants, raisins and sultanas (vine fruits). If you cannot obtain currants or sultanas locally, you may replace with similar quantities of some chopped prunes, dried apricots and a few fresh dates. However, to get a really traditional flavour you really should use good quality muscat raisins wherever possible. You may need to check that the raisins have had their pips removed.

The recipe calls for candied peel, which is essential to obtain that special Christmassy flavour. We've a recipe for making your own here.

100ml of brandy (to be added after cooking)

These quantities will make enough for two or three jars of mincemeat.

Tip everything into a heavy-bottomed saucepan and gently bring to a simmer. Stir carefully to ensure the spices are well mixed throughout the fruit and to melt the butter. Cover and gently stew for about ten minutes.

Remove from the heat and stir in 100ml brandy.

Stir the mixture again to ensure the fruit is well dispersed.

Spoon the mincemeat into sterilised jars with well-fitting lids, if you want to store it. The mincemeat will benefit from being allowed to mature, it will keep well in a cool dark store cupboard. However, it is ready to use more or less immediately, if you're in a hurry to enjoy some Christmas flavours. In this case, all you need to do is to transfer it to a lidded container and allow it to stand for a day or so. Then make some pastry and delight your family and friends with the real taste of home.

1Mixed spice is a mixture of ground cinnamon, cloves, nutmeg and ginger.