The Muumuu - Unsexy Fashion Content from the guide to life, the universe and everything 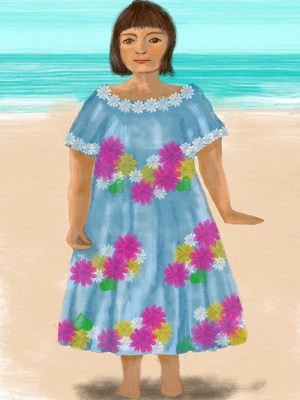 You can always tell a Hawaiian. He will never, ever, under any circumstances, wear an aloha shirt that matches his wife's muumuu.
– Online Hawaiian joke.

Clothes: what are they good for? In most parts of the world, they keep us warm. They can protect us from the elements. In hot climates, they can soak up sweat and help us cool off. Clothes can signal our social status, or our membership in the group. Clothes can be practical, or serve as display items. Clothes can tell other people what we want them to know about us.

Fashion is a way of creating a group image. Fashions change over time, but each fashion era is basically about the profile, the silhouette. What does a man or woman look like in this time and place? Quick: think about ancient Rome. There go Senator Publius Ignoramus and his wife Rhea Pulchritudina. What do they look like, outlined against the setting sun over the Tiber? You saw a toga and flowing robe, didn't you? That's the fashion profile in the Year Zero.

In most societies, profiles are gendered. Think about Western European and North American fashions of 1850. Men: tall and slim. Top hats make them look taller. Stovepipe trousers make them slimmer. Women, on the other hand, look like upholstery. All that padding and crinoline. But notice the profile. The silhouette exaggerates the female form: chest out, waist in, hips wide. Underneath, tiny feet going pitter-pat. (They practised, a lot.) Very Victorian, this profile: the padding hides sexuality, but the profile accentuates it. It's about sex.

Sex, on the other hand, was what missionaries were not about. From the point of view of missionaries, clothing should do one thing: cover. Fashion shouldn't make people think about sex. Thinking about sex was a bad thing.

That is why Victorian missionary fashion designers invented the perfect garment: the muumuu. Haute couture, it isn't. It is the ultimate sartorial anti-aphrodisiac.

Polynesia: in the beginning, there was a lot of skin showing. People who live on balmy Pacific Islands prefer beachwear. Grass skirts and sarongs were fine – until the missionaries got there. Instead of going with the flow, the missionaries became traumatised by all that scandalous display. They demanded that the locals cover up, to spare the missionaries' sensibilities. The missionaries never stopped to ask themselves, 'What would Jesus do?' They assumed he'd prefer that people wore djellabas.

Polynesians had no dress sense and no tradition. So the missionaries obligingly invented a style for Polynesian ladies. It was called the 'Mother Hubbard'. A Mother Hubbard was a long, wide, loose-fitting dress with long sleeves and a high neck. The purpose of the design: to cover up as much skin surface as possible. Civilisation had arrived.

In Tahiti, this dress is called 'ahu mama ru'au, or 'grandmother's dress'. In the Marshall Islands, it's called wau. This is not as in, 'Oh, wow. Isn't it cool?', but wau, as in Oahu. The garment arrived from Hawaii, courtesy of missionary exchange.

Mother Hubbards were a bit too hard to sew. Sleeves are too complicated, ditto yokes. So the Polynesian women changed the design. They kept the shapelessness, but removed the yoke and tight sleeves, producing a looser, more comfortable design. They made the colours brighter and more fun. The result? The mu'umu'u, meaning 'cut off'.

The dress became wildly popular. After all, though it flatters no one, the shape is a great leveller. Nobody looks worse in it than anyone else. And it's pretty comfortable.

Muumuus make good maternity wear, because they don't constrict. For the same reason, the muumuu is a must-have item for plus-size ladies. In South Asia, they're called 'housecoats', and regarded as loungewear. But the humble muumuu can go uptown, as well – or even into the wild blue yonder.

In the 1950s, Hawaiian Airlines dressed its (female) flight attendants in muumuus. The dresses bore the airline's logo, and were in a distinctive purple-and-white print. When you got on a plane with bemuumuued stewardesses, you knew you were on your way to a tropical paradise.

Today, Hawaiian women still like muumuus. There are various designs, of course. Some have yokes, and trains for evening wear. Muumuus can be worn to weddings and formal events. Like the male equivalent, the ever-popular luau shirt, the muumuu can be a riot of colour. Its print can sport gaudy flowers, such as lilies or orchids, or beautiful birds of paradise.

Like all fashion, the muumuu signals membership in a group. It's practical, fun, and displays the wearer's good taste. And, like all fashion, it's probably about the silhouette. But perhaps that silhouette isn't saying, 'Don't think about the female form.' Maybe, just maybe, it's saying, 'Look at the pretty colours, and stop trying to spot my waist.'

Make Your Own Muumuu

Muumuus are not a major product in your local high-fashion dress shop. The main reason for this is that muumuus are so easy to make. Basically, you need a few yards of cloth – the brighter, the better – some thread, a measuring tape, scissors, and a sewing machine.

Here are some easy online directions. Ladies, make them for yourselves. Gents: hijack your female Significant Other. Be prepared, though: when she demands to know just why you are making her a loud, shapeless garment, stress that this is not a comment on her figure.

But to prove it, you may have to buy plane tickets to Hawaii. Maybe you can time your visit for the next ukulele festival. 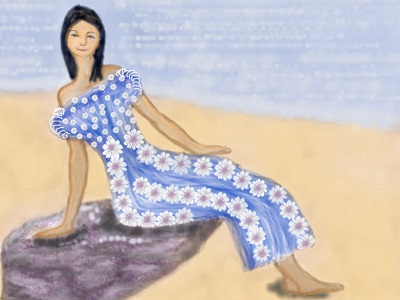