Boris, Elvis, and Tricky Dick: The Curious Case of Voice Actor Paul Frees Content from the guide to life, the universe and everything 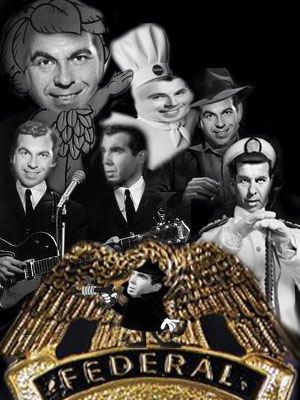 Here's a pop culture question: What do all these famous names have in common? (You have 15 seconds.)

The story, however, is a bit more interesting than that. The man who voiced Boris Badenov by day worked as an undercover agent by night. Or so it is claimed by those 'in the know'. Natasha, Boris' spy partner in Rocky and Bullwinkle, probably didn't know, and the owner of Natasha's voice, June Foray, might not have cared. But it's an intriguing tale, and if it needed to get any weirder, it involves Elvis Presley.

But first, a bit about Paul Frees.

I make my living from dead people.   – Paul Frees

Bill Scott, co-creator with Jay Ward of Rocky and Bullwinkle, said 'his voice was like a cathedral pipe organ'. He was to Disney what Mel Blanc was to Warner Brothers – a 'man of a thousand voices'. To The Beatles and Elvis, he was a friend. To June Foray, the voice of both Natasha and Rocky Squirrel, 'Paul was a nut!'

Paul was born Solomon Hersh Frees in Chicago. In the 1930s, he put his four-octave vocal range to work on the vaudeville stage, later moving to radio. In 1942, he was drafted into World War II. Seriously wounded during the Normandy Invasion, he was sent home to recover. After the war, he took advantage of the GI Bill to attend art college. His academic career was cut short by the illness of his wife, however, and he returned to radio.

Frees had an amazing range of talents. As a radio artist, he was capable of playing almost any part – in fact, in one series, The Player, he played all the parts. For the Disney Corporation, he not only voiced cartoon characters, but also did the voiceover work for features at Disneyland. Some of his work can still be heard there, although some parts have been overdubbed, simply because the equipment wore out.

In addition to voicing such characters as Ludwig von Drake (for Disney) and Boris Badenov (for Ward/Scott), Frees did voiceover work for cinema. Frees did commercials, of course – he was 'Sprout' for the Jolly Green Giant, and he put the giggle in Pillsbury's Doughboy. He substituted for actors who were ill, like Humphrey Bogart in his last film. He also dubbed dialogue for actors who had heavy foreign accents, such as Toshiro Mifune in Midway. He even stood in for the dead, such as Dick Wessel in The Ugly Dachshund, who had succumbed to a heart attack after completing principal photography.

Although he said he 'made a living from dead people', Frees could imitate the living just as well. In the mid-1960s there was a television series starring 'The Beatles' – well, cartoons of them, and the Fab Four weren't involved in the taping. Frees provided 'Liverpudlian' wit on behalf of both John Lennon and George Harrison.

He did other things (when he got bored, we suspect) such as compose music and care for his pet birds.

This man of many talents died suddenly at the age of 66, of a heart attack. At the funeral, actor Lorne Greene recounted this story:

Years ago, I was getting these strange phone calls in the middle of the night. It was a sultry, deep-voiced woman who made all sorts of obscene suggestions. I was married, so it was irritating and I couldn't figure out who it was and how she got my phone number. Sometime later, I was on the lot when I heard the voice behind me say 'Hi, there, big boy!' I turned around and it was Paul!

Frees was known as a wit, a raconteur, and a show-off. He'd been married six times. But his friends, including Elvis Presley and John Lennon, always spoke well of him.

So What About Those Feds?

To federal police agencies, of course, Paul Frees was allegedly a valuable undercover asset. Not much is known about Frees' work in that area. If he told us, he might have had to kill us.

According to his friends, Frees worked undercover for the Bureau of Narcotics, a forerunner of the DEA1. His next-door neighbour claimed in an interview that Frees kept a sidearm at home. We do not know for sure whether Frees' ability to use disguises and voices was of value to the Bureau, although it is fun to guess.

We do know that Frees had a badge. How do we know this? Because several witnesses have attested to the fact that Elvis saw this badge – and wanted one, too.

According to Jerry Schilling in his book Me and a Guy Named Elvis, the rock-n-roll king's reaction to seeing Paul Frees' badge – which he had apparently earned by actually working for the feds – was to write a letter to President Nixon volunteering to be an agent for the Bureau of Narcotics, if this could be kept quiet. Obligingly, Nixon, apparently an Elvis fan, supplied Presley with bona fides as a 'federal agent at large', just like Paul Frees.

Insert your own joke here.

How to Enjoy the Work of Paul Frees

First off, simply go mad on Youtube. Look up Rocky and Bullwinkle. Look up Frees himself. Look up 'Frees' and 'laughter'. You'll get a sample of him laughing maniacally.

Check out Paul Frees' many voices. It's hard to tell which is more wonderful: Frees' Transylvanian accent, or his pitch-perfect imitation of Peter Lorre speaking English.

Listen to The Player for a blast of old-time radio fun. Paul Frees is doing all of the voices, remember.

Enjoy both Frees and the talented William Conrad in this commercial that combines our love of a good space yarn with our need for a nutritious, energy-giving breakfast cereal. William Conrad, another superb voice actor, played Marshall Dillon in Gunsmoke until TV forced them to find an actor who was tall and had hair, rather than one with a beautiful voice. James Arness was nice-looking, but did he have a thousand voices?

Want to watch some live action courtesy of Paul Frees? Get hip, or hep, or whatever, to the wild goings-on in the 1960s 'action' film The Beatniks. It's real gone, daddy-o, but don't expect Jack Kerouac to show up. Thrill to the wild car chases. Groove on the kitschy music supplied in part by Frees, who should have been ashamed. As to the acting, one archive.org commenter remarks, 'Breck [Peter Breck, the star of the film] is awesome as he totally gets under your skin like a bad reaction to cheap talcum powder.'

Where to Read the Gossip

Jerry Schilling, Me and a Guy Named Elvis: My Lifelong Friendship with Elvis Presley (Gotham Books, 2006) will fill you in on the visit to the Nixon White House, along with probably more than you'd ever want to know about the King of Rock-n-Roll.

Keith Scott, The Moose That Roared (St Martin's Press, 2000) will introduce you to the talented and wacky crew behind Rocky and Bullwinkle, Dudley Doo-Right, and the unforgettable Super Chicken.

Tim Lawson and Alisa Persons, The Magic Behind the Voices: A Who's Who of Cartoon Voice Actors (University of Mississippi Press, 2004) will inform you about the wider world of cartoon voice actors.

For the official story of the historic meeting between Elvis Presley and Richard Nixon, visit 'When Nixon Met Elvis', courtesy of US government archives.