A Potted History of Bovril Content from the guide to life, the universe and everything 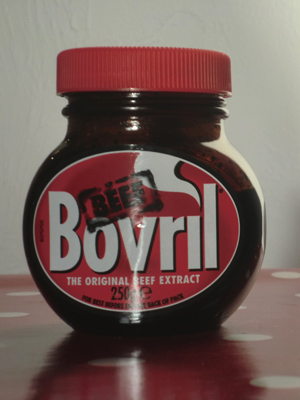 Therewith Zee began to enter into an explanation of which I understood very little, for there is no word in any language I know which is an exact synonym for vril.
— Edward Bulwer Lytton, The Coming Race

Not only did the writing of Victorian novelist Edward Bulwer Lytton inspire a spoof fiction contest, but one of the terms he coined lives on today in the name of one of the most iconic of British food brands.

Members of the master race that Bulwer Lytton described in his 1871 novel The Coming Race derive their mind-controlling powers from a mysterious fluid energy he called 'vril'. The concept caught the imagination of many of the time, including one Scottish chemist, looking for a name for the beef extract product he had recently developed. Beef Vril? Ox Vril? Bovine Vril – hang on, that's it – Bovril!

The chemist in question was John Lawson Johnston, born in Roslin, Midlothian in 1839. Indeed, the location of his birth connects the man to the mumbo-jumbo of another bestselling author; Roslin (or Rosslyn) Chapel is the final resting place of the Holy Grail in Dan Brown's The Da Vinci Code.

Johnston needed the snappy brand name: he had marketed the product up to then as 'Johnston's Fluid Beef'. He first came up with the idea of a beef broth in 1863 while working in Canada, but developed this into the familiar bottled concentrate 12 years later. A renowned food scientist, he had been approached by the French government to supply their army with one million tins of beef. They clearly hadn't learned Napoleon Bonaparte's wisdom that an army marches on its stomach, and the undernourishment of troops was implicated in their defeat in the Franco-Prussian war of 1870-71. Johnston used the leftovers from this order to develop a beef concentrate at a factory in Quebec City, later moving production to Montreal.

After a fire swept through the Montreal plant in 1884 Johnston relocated to London, where he set up production once again. The Bovril name was registered in 1887, and the distinctive bulbous brown jars followed one year later.

Bovril's success was in no small part due to its versatility. Not only could you spread it on toast, or add a spoonful of the dark goo into your soups and stews to give a beefy kick, but you could add hot water to it for 'the most strengthening, nourishing beverage known, being meat and drink at one draught'.

Not only did it 'invigorate the healthy and strengthen invalids', but it was rapidly adopted by all manner of athletes. Cross-channel swimmers would take regular breathers, clinging to the side of their support craft sipping Bovril brewed up with a spirit kettle. Intrepid polar explorer Ernest Shackleton kept his team alive for many months on a diet of penguin and Bovril, as the men survived being marooned on Elephant Island in 1916.

Bovril has never been everybody's cup of (beef) tea, but one place which has become associated with the product more than any other is the British football terraces. Those nostalgic for the golden age of football, before the era of seated stadia, replica shirts and obscene racist chanting will forever associate a steaming half-time cup of Bovril with cloth caps, baggy shorts and stamping your feet to keep warm in't bitter northerly wind.

Footballer Jimmy Greaves became the face of the product in 1961, later going on to state that he wished he'd drunk more of the stuff in the 1970s, instead of other things. Interestingly, the substitution of Bovril for alcohol was one of the teetotal Johnston's visions for the product. Indeed, it was successfully sold in thousands of British pubs in the late 19th Century.

It's no exaggeration to say that Bovril was a huge commercial success. Johnston sold his company for £2 million in 1896 and used his wealth to buy a mansion in South London, as well as the Prince of Wales' racing yacht Britannia. He left an estate of £1 million when he died in 1900 – on board another yacht in Cannes.

The Bovril Company managed the product through its heyday up until 1971, when it was sold to James Goldsmith's Cavenham Foods. Goldsmith sold off company assets including their Argentinian cattle ranches in order to finance the purchase. In 1980, it was sold along with Marmite and Ambrosia to pharmaceutical giant Smithkline Beecham, and in 1990 the products were bought by CPC (later Bestfoods). In 2001 they were assimilated into the Unilever empire.

It's probably fair to say that Bovril's longevity and continued success – they still sell three million jars a year in the UK – is attributable to their sense of tradition, their eye-catching advertisements and their readiness to defend the brand against all impostors and detractors.

Attempts to modernise the brand have generally been inadvisable and short-lived. In 1988, model Jerry Hall, resplendent in bird suit, promoted the new chicken-flavoured variety as a slimming aid, however new owners CPC relaunched with a more traditional campaign in 1991. The much-loved TV ad showed a hapless motorcycle despatch rider suffer a bad day at work, before being handed the steaming drink by his mum – all to the sound of Elvis Presley's 'The Wonder of You'.

Following the UK's mad cow disease1 outbreak of 1986, products like Bovril found themselves added to many import blacklists – this despite all its beef originating in either South America or Australia. In 2004, partly to allay foreign concerns and partly to widen its appeal, Unilever removed the beef from the product, making it a vegetarian yeast-based concoction. Sales weren't good, and they were mightily relieved to reintroduce the beef two years later, following the lifting of the export ban.

We'll finish by scraping the bottom of the jar for a little Bovril trivia.