How to Survive Amateur Dramatics Content from the guide to life, the universe and everything 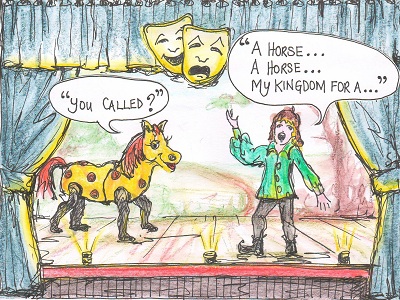 Have you longed to act, but hesitated to join an amateur dramatics group? This Entry aims to give you an idea of what to expect, and what you might find yourself doing.

The first requirement for anyone wanting to act is the ability to read aloud without falling over words. The second is the imagination to think yourself into a variety of roles. It is, of course, an advantage to know something about the theatre and some of the playwrights you might encounter. The question 'Who's this Shakespeare bloke?' won't commend you, but you don't need to be able to reel off a list of plays you know by heart.

How to Find a Group

Unless you're a student, in which case you will meet amateur dramatics groups at freshers' events, you may need to look around. Libraries and local authority websites usually have lists of local societies, but another good source is your local paper. See what groups are putting on productions in your area, and go along. You may find that the production gives you a indication of whether you would feel at home. You might even get talked into joining.

If you are lucky, you might find a group that has access to a small theatre, or a well-equipped school hall. But you may find that rehearsals are held in a draughty church hall. So turn up in comfortable clothes and be prepared to hang around. Be prepared to be flexible – you may not get a big part on your first attempt, but you will make yourself popular if you display a willingness to paint scenery, act as a prompt, or take charge of the lighting.

The first person you need to get to know is the producer. He (or she) may choose the cast, decide the moves on stage and preside at all the rehearsals. As well as a knowledge of theatre, he needs to have masses of determination and energy, and the ability to deal with some eccentric people.

If your group is well organised, there will probably be auditions for the main roles. If you get a chance, read through the play beforehand, so you have a feel for the events, characters and tone. You don't want to make a fool of yourself by declaiming, as if you're making a great emotional speech, only to find that you're actually reading light comedy.

Casting is an area where the producer will need to use diplomacy. There may be members of the group who want to be stars but are not good enough; there may be mature women who want to play the young heroine. You stand a better chance of success if you're male, because amateur dramatics groups are usually overprovided with women.

The kind of play your company chooses to present may be limited by the numbers available. You may have been involved in a school play which roped in scores of pupils, but a small amateur dramatic company will have to make do with a few volunteers. Only the boldest of groups will attempt to produce Henry V with a company that is limited to a handful of women of varying ages and fewer men.

Plays like Noel Coward's Private Lives and Blithe Spirit are popular choices, as are murder mysteries. A word of warning about pantomimes: – they are easy to get wrong, because they involve a lot of on-stage business. It won't do if Daisy the Cow comes dancing in, ready to knock over a bucket, if Jack is carrying it round the stage. A consideration in choosing a play by a contemporary, or recent playwright, is that the group will have to pay for copyright. Unless you write your own.

At this stage, you may not have seen the theatre where you are expected to perform. Don't expect anything too grand. The usual requirements are a hall with a stage, curtains and some lights. You might ask 'Do we need curtains, can't we take our plays out into the audience?' Well yes, if you're brave, but curtains have the advantage that they hide the things you don't want your audience to see. Like members of the cast adjusting their costumes, the prompt sitting in a corner, or the props manager standing ready to hand an actor a dagger.

A traditional form of scenery is the flat – a rectangular wooden frame covered by canvas, which needs fireproofing and painting. When you join your company of actors, you may find yourself painting flats. The company will need a place to store the flats and a van to transport them to the theatre, unless it's lucky enough to have storage on site. You may get roped into helping to move scenery.

If the company has little storage space, it may have to use furniture, potted plants and other props to convey the setting of the play. This practice has impeccable antecedents – Shakespeare's touring company used scenery that actors could carry on and off stage. Remember, however, that scenery is intended to look plausible, but may not be strong enough to cope with rough handling. The history of amateur dramatics is full of stories of actors falling through doors, or pushing over plaster columns.

Your company may have props and costumes available for a range of plays - Greek urns, Victorian crinolines, imitation weapons. Be careful with the last – remember not to flourish them in public! If your company is presenting a play set in the present, or recent past, you may be asked to provide some of your own costumes and props. Elderly relatives may have clothes or utensils dating back to the 1940s, or you may find yourself scouring charity shops. You will be popular if you are prepared to make costumes, or to act as props manager, ensuring that the cast have the props they need at the right time.

Early on, reharsals are likely to take place in an everyday environment – the church hall, or room in an office block where the company usually meets. Cast members will sit round in ordinary clothes, with their scripts, while the producer takes them through a scene, working out moves, and practising lines. Rehearsals are vital, and you should learn your lines as soon as possible. It is difficult to get into the mood for a scene if you are having to read from your script. However, unless your character is in every scene, you won't have to attend all the rehearsals.

The moment when you finally step onto the stage can be daunting. You look out over rows of seats, although only the producer and a few fellow cast-members are sitting there. You may find that you need to learn to project your voice. This doesn't mean shouting; it means breathing with the whole of your lungs, from the diaphragm upwards. All too soon, it will be time for the dress rehearsal, when the cast is all assembled, in their costumes and the lights go up. This is, notoriously, the time when things go wrong, but at least you have a chance to put them right before the first night.

Everyone dreads drying up with stage fright, but it doesn't often happen. You are bound to be nervous but there is no need to worry unduly, if you've learned your lines and practised your moves until you know them by heart. Before you go on, check whether your costume is adjusted properly – it is disconcerting if you are wearing a headdress that sinks down over your eyes as you speak. Make sure you have with you any props you are meant to carry on stage, listen for your prompt, then go. You will only see the faces of the first few rows of the audience and you need not pay them much attention. If you have immersed yourself in the world of the play, you may find yourself forgetting your normal worries and living through your character. You are acting. Well done!

Apart from being great fun, amateur dramatics can introduce you to a range of new friends. In addition, getting involved in productions gives you the chance to learn new skills, from taking charge of sound effects to organising refreshments for the audience. And perhaps the greatest benefit is that acting gives you the confidence to stand up in public, to make a presentation or give a speech. You might even find that you're hooked.