Brighton and Hove - City by the Sea Content from the guide to life, the universe and everything 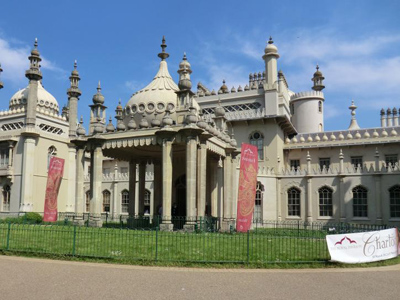 The city of Brighton and Hove has a unique character; it is a place that blends both business and pleasure. It owes the ability to do this to its location, strung along the south coast of England, between the South Downs and the sea. Its proximity to London, and mild climate, make it an obvious bolt-hole for jaded Londoners. These days you can drive down the M23/A23, but the city has notorious parking problems, so you might prefer to take the train. Rail travel takes about an hour from London Victoria. There are plenty of buses in the city – look out for their names1. As you leave the station, notice the quality of the light. It seems brighter, sometimes Mediterranean.

Brighton started life as the fishing port of Brightelmstone. The fishermen and their families lived in poor cottages on land under the cliffs, which has since disappeared beneath the sea. However, those people whose lives were less linked to the sea dwelt on higher land, in a labyrinth of mediaeval streets. These street patterns have remained in the area called the Lanes (strictly speaking, the area bounded by East Street, West Street, North Street and Kings Road). Although most of the existing buildings date from the early 19th century, the Lanes still retain an old-world charm. You can windowshop in antique shops, boutiques, and jewellers, or stop for lunch in one of many cafés, restaurants and pubs.

The town's fortunes began to change with the arrival of Dr Richard Russell, who could be credited with the invention of the English seaside resort. In 1753, he published Dissertation Concerning the Use of Sea Water in Diseases of the Glands which proclaimed the health benefits of drinking and bathing in sea water. The number of his patients grew, and sea bathing became the fashion.

Sea bathing was, of course, segregated. As most people couldn't swim, bathing was supervised by 'bathers' for gentlemen and 'dippers' for ladies. The visitor entered a machine, built on wooden wheels and pulled by a horse. As the bather changed into a loose robe, the machine was drawn into the sea. The attendants seized the bather and dunked him or her vigorously in the sea. Gentlemen liked to loiter close to the ladies' bathing place and use telescopes and spy glasses to watch the ladies emerging.

But it was the patronage of the Prince of Wales, later George IV, that turned Brighton into the most fashionable seaside resort in the country. Prinny, as he was known, was a vain and extravagant man, who loved fashion, the arts, and good living. He rebelled against his conservative father and spent his time drinking, womanising and gambling. Brighton suited him.

The Prince leased a small farmhouse on The Steine, the open space round which fashionable Brighton developed. Later, he commissioned a villa on the site, known as the Marine Pavilion. This was a modest building but, in 1815 the Prince instructed eminent architect John Nash to rebuild it in Indian style. The result is a remarkable building, exotic and flamboyant, quite unique in Britain. Outside, it provides a vista of domes and pinnacles, while inside it is full of Chinese style decorations. Notice the grandeur of the Banqueting Room, which was designed to accommodate the magnificent feasts that the Prince Regent was fond of giving. These could run to 70 courses! One tip for visiting the Royal Pavilion with your family is try to count the dragons. They are everywhere – on vases, mirrors, even flying from the ceiling.

Prinny's fashionable alternative court attracted wealthy people, who wanted high quality accommodation. Grand terraces, crescents and individual houses were built in the town, and in neighbouring Hove. After George's death, tastes changed. Queen Victoria had little use for the Pavilion and sold it to the town. However, Brighton retained its reputation for a blend of raffishness and affluence, while Hove claimed to be more genteel.

The North Laines (bounded by North Street, Trafalgar Street, Queens Road and Old Steine) grew up in the 1830s, near the Pavilion. Here you can find shops which are unique, or downright wacky, like the shop that calls itself 'Vegetarian Shoes'. Kensington Gardens is lined with stalls, selling everything from hats and jewellery to secondhand books and tinned food. The North Laines also claim four theatres. The Dome, which was originally the Prince Regent's riding stables, is now a well-known concert venue, while the Theatre Royal hosts a range of plays and shows. 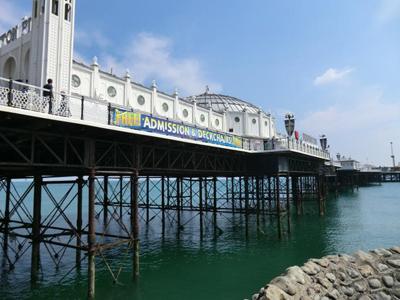 As Brighton grew, there was a demand for more places to meet and be entertained, which led to a flurry of pier building. When the Chain Pier was built in 1823, its primary function was as a landing stage for sailing ships between Brighton and Dieppe. However, it also had some public amusements. After the railway arrived in Brighton in 1841, working class people flocked to the city in the summer, making the piers their playground. The Chain Pier was joined by the West Pier in 1866. However, the Palace Pier, built in 1899, is the only one that remains to this day. It is one of the most elaborate of Britain's surviving piers and provides a mixture of faded grandeur and tackiness. It offers a variety of shows, rides for children and adults, as well as places to eat and drink.

From the steps near the Palace Pier, you can walk westward along Brighton beach, with the sea to your left and the hotels along the King's Road on your right. The beach is made up of pebbles, so you will slip and slide, but continue until you reach the ghostly wreck of the West Pier, which was consumed by fire in 2003. If you want to travel eastwards from the Palace Pier, along Madeira Drive, you could take a ride on Magnus Volk's electric railway, which was a pioneering feat of engineering when it was built in 1883. The Brighton Sea Life Centre also dates from this era.

The piers had their heyday in the 1920s and 30s, but Brighton in the 30s had its sleazy side, in the form of racecourse gangs. This darker side of Brighton forms the background of Graham Greene's novel Brighton Rock. After the Second World War, British seaside resorts declined, hit by the availability of package tours abroad. But Brighton remained a venue for day trippers and also, notoriously, for unmarried couples wanting a 'dirty weekend'.

Over the Whitsun bank holiday in 1964, over 1,000 teenagers were involved in violent clashes in Brighton. Groups of Mods and Rockers gathered at the Palace Pier, shouted and chanted at each other, and threw stones when the police tried to disperse them. On the beach, they threw deckchairs around, made bonfires of them and frightened passersby. There were sharp divisions between the Mods and Rockers. Mods wore parkas over designer suits, rode Vespa or Lambretta scooters, and listened to The Who, or Ska music. The Rockers rode motorbikes, wore leathers and liked Elvis and Gene Vincent. The clashes were dramatised in the film Quadrophenia.

It is difficult to encapsulate the spirit of modern Brighton. While it is has now become a centre for knowledge-based industries, it is still a place for entertainment and pleasure. It has the feel of a young persons' place, with its range of clubs, pubs and cinemas, as well as a modern shopping centre, with two universities and a number of colleges. As well as a racecourse, it also has a Marina, which provides 1600 berths for boats.

One of Brighton's characteristics is an open-mindedness, a readiness to accept the original and different. This has made it a centre for culture and the arts, and a place where alternative lifestyles flourish. The city has a number of gay bars and pubs, and its gay community hosts the biggest Pride Festival in the UK. An interest in environmental issues makes it a cycling city, as well as a good place to look for organic and vegetarian food. The people of Brighton elected the first Green MP and the first Green-controlled local government council in England.

There is always something happening in Brighton. Because it is only 54 miles (87 kilometres) from London, it forms an obvious destination for rallies and rides starting in the capital. There are London-Brighton cycle rides, on behalf of the British Heart Foundation, and an annual veteran car run. These rallies usually end in Madeira Drive, where you might be lucky enough to see one.

Brighton has always been regarded as more vulgar than genteel Hove. Although the two communities are contiguous, those who fancied themselves socially superior claimed to be from Hove. This led to a joke - 'Are you from Brighton? No, Hove actually'. However the two communities joined under one Brighton and Hove Council in 1997. In 2000 the Queen awarded a charter formally recognising Brighton and Hove as a city. It has come a long way since the Prince Regent arrived, but perhaps some of his hedonistic spirit remains.

1Brighton and Hove's buses have been named after notable deceased people with a connection to the area since 1999.