Guild Wars Eye of the North Content from the guide to life, the universe and everything 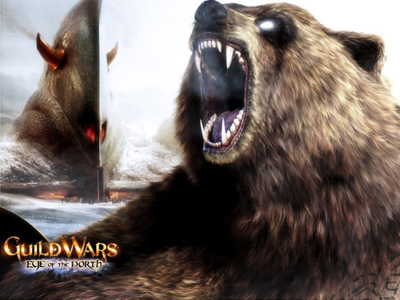 Ascalon was the gem of Tyria, the centre of my world. Six years ago my world burned. We fled before the assault, into the unexplored reaches of northern Tyria. Now the battle continues. We found ourselves in strange new lands. We confronted unexpected and powerful menaces. We discovered unlikely and unpredictable allies. Now a new threat from the heart of the world endangers us all.
–  Eye of the North trailer

As Eye of the North, released in 2007, is an add-on to the Guild Wars MMORPG and not a separate campaign, it has no starting area and no special professions. Characters can access it by a quest starting in the capital city of any campaign after reaching at least level 10. By entering Eye of the North, all characters are automatically raised to level 20 for the duration of their stay.

Six years after the Searing1, the earth is shaking in Tyria, Cantha and Elona. The heroes of all three continents are sent to investigate the chasms that have opened up during the earthquakes. What they find is a maze of tunnels; they encounter Ogden Stonehealer, a dwarf, and Vekk, who later turns out to be of a very clever, goblin-like race called Asura. Together with these two friends, the heroes have to flee from monstrous creatures - the Destroyers. Through a magical Asura gate, they can reach a place in the northern Shiverpeak Mountains on the continent of Tyria, but the gate itself has to be destroyed.

Having passed through the gate, the heroes meet Jora - a tall, shapeshifting, human-like Norn. She tells them that there are other humans further north, so the journey continues in that direction. The humans are found at the Eye of the North, a mysterious, ancient tower in a frozen lake. It turns out that they are refugees from Ascalon, among them Gwen, a girl who can be met right at the beginning of the Prophecies campaign. She is now grown up and a member of the so-called Ebon Vanguard that still continues the fight against the Charr.

In the Hall of Monuments in the Eye of the North, the heroes have the first of four visions in a big scrying pool. It becomes apparent that the Destroyers will soon overrun Tyria from beneath the earth and an army is needed to fight them. Humans, Dwarfs, Asura and Norn have to stand together. The heroes travel to all of the four peoples to convince them and gain them as allies in battle.

In the Charr Homelands, they rescue a unit of the Ebon Vanguard from the Charr and even meet some Charr who fight against their own people and especially the shamans who suppress them. In the Far Shiverpeaks, they help Jora to hunt the Nornbear - her brother Svanir who has become a monstrous creature due to some evil power while Jora herself lost her ability to shapeshift. The heroes kill Svanir and hunt Destroyers with a group of Norn hunters, gaining their respect. The Asura live far away, in the southern jungles of Kryta. They have been forced to leave their underground homes because the Destroyers came through the tunnels. The heroes can get support from the three best Asura technicians, who build golems to fight the Destroyers. In the end, the hammer of the Great Dwarf is retrieved from a hidden place. This hammer turns all dwarfs into stone, making them ready to fight the Great Dwarf's greatest enemy: the Great Destroyer. Together, the four races manage to overcome the Destroyers, but another evil is awakening in the depths of Tyria.

You hear only the sound of your footsteps in the snow; a few snowflakes still tumble down from the sky. Then you reach the top of the hill and there it is: standing in the middle of a frozen lake, surrounded by mountains, a high tower reaching into the sky, looking completely out of place - the Eye of the North.

Just like the southern Shiverpeak Mountains, the northern Shiverpeaks are a cold place. Snowflakes are constantly falling from the grey sky and everything is covered in white. Only conifers and small bushes grow here, bearing the weight of the snow on their branches. But there is plenty of game, a good hunt for the Norn who really like hunting – especially if their prey is stronger and faster than they are. The Norn themselves are a tall and strong people of a human appearance who live scattered across the mountains.

North of Ascalon lie the homelands of the Charr – big, feline-like creatures with horns growing from various parts of their bodies. The Charr came from these lands to invade the human lands. Just like in Ascalon before the Searing, golden sunlight is drawing patterns of shadow on the grass under the coloured leaves of the forests and various flowers are in bloom on the green hills. Only a few patches of snow remind travellers of the cold mountains. The many Charr warbands that guard these hills have built only temporary structures like tents and towers of wood and leather. Among their favourite places are the rocks that tower over the green meadows filled with flowers and butterflies. And in the centre of it all lies a lake; in its middle is an island with a huge, scaly something on top.

In Kryta, south of Maguuma Jungle lies the Tarnished Coast. A thick jungle of exotic greenery and colourful flowers grow here. Scattered across the land are the ruins of an ancient civilisation: huge stepped pyramids and other things that look as if they were made by meso-American people. When the Asura came to the surface, they found these remains and used them for their own purposes, adding their sparkling technology.

Here, in the southeast of the Tarnished Coast, the wise, old centaur Ventari is guarding the sapling of a tree that will be of importance later. In the middle of the jungle, surrounded by water and high mangroves, the strange plant is at the beginning of its life. Crooked like a corkscrew, it is slowly growing into the sky, surrounded by a magical light.

Deep under Tyria, there are huge caves that no human would expect to be there. Not only did the Asura live here and connect many caves together with their magical gates, but now the Dwarves are exploring the caves, building mines and digging deep. But people have been coming here since long before the dwarfs. Huge halls and other structures can be found everywhere; they look like they have been made by various civilisations and often resemble buildings that can also be found above ground.

The Hall of Monuments

The Hall of Monuments was brought into the game with Guild Wars Eye of the North. Every character has their own Hall of Monuments, where they can show off statues they received for titles, elite armour, special weapons, heroes and minipets2.

Accomplishments in the Hall of Monuments in Guild Wars will also be rewarded in the new game Guild Wars 2. Here, the player will get various items for his achievements in the original game. Just like elite armour, these items won't be better than others; they will just be nice to have and show off to others.

Eye of the North has 18 dungeons. Every one of them is a series of instances with a single quest that shows the way. The instances are different levels on the map and to progress to the next level the player has to perform tasks. Some of these dungeons are visited while playing the storyline quests of Eye of the North, but most are stand-alone content.

In other campaigns, minigames are only available on special occasions like holiday celebrations. Eye of the North, on the other hand, has a few minigames that are constantly accessible.

Guild Wars Beyond – Hearts of the North

For some years, the events of Hearts of the North have been prepared in the Wintersday quests of Eye of the North. In winter 2010, the story was finally resolved, with the last part released around Christmas, to correspond with the world of Guild Wars' Wintersday. To play Hearts of the North, characters first have to complete the War in Kryta quests in the Prophecies campaign. After the war, Lt Keiran Thackery is missing. Keiran has to be found, which is possible with the help of the scrying pool in the Eye of the North. He is then reunited with Gwen, who – after a few Wintersdays – finally accepts that she loves him. The quest ends with the wedding of Keiran and Gwen. Their descendant, Logan Thackery, will later play a major role in Guild Wars 2.

Originally, ArenaNet wanted to release a new campaign for Guild Wars every six months. Utopia was meant to be the 4th campaign, after Nightfall, and should have been released in April 2007. The project was cancelled early in the same year because the team had new ideas that could not be implemented in the game or would have made it too complex. The addition of another two professions would have been too much for the already difficult balancing.

In the end, ArenaNet decided to cancel Utopia and start the development of a whole new game: Guild Wars 2. Some of the design and ideas for Utopia were obviously used in Eye of the North while others have been developed further and will be seen in Guild Wars 2.

A Time for Heroes

No matter which campaign of Guild Wars you play, Eye of the North is certainly a good (and not even expensive) addition. Gameplay gets easier with the level 20 heroes that can be acquired here, and both the Hall of Monuments and the story are especially interesting if you plan to play Guild Wars 2.

1See Guild Wars Prophecies.2Minipets are miniatures of monsters and NPCs that can be collected for no greater purpose.3Non-Player Characters, characters controlled by the computer rather than by a human.