Guild Wars Nightfall Content from the guide to life, the universe and everything 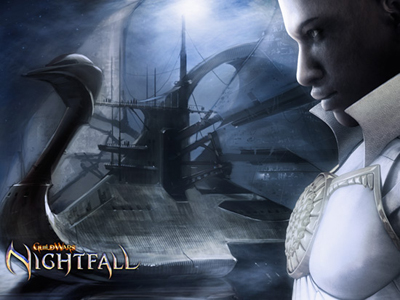 Elona, land of the golden sun. A land of wealth and bounty. A land of heroes. A land protected by its champions, the order of the Sunspears. A shadow now falls upon this land. A shadow of an ancient and forgotten darkness. Night falls. The time of the five Gods is at an end.
–  Guild Wars Nightfall Intro

Nightfall is the third part of the Guild Wars MMORPG1 and was released in 2006, soon after Factions. With this campaign, heroes are introduced into the game. Until this point, only henchmen have been available to join players in battle.

South of the Crystal Desert and the continent of Tyria - seen in the Prophecies campaign - lies the oriental continent of Elona. On the islands of Istan, the military organisation of the Sunspears defend their home. A group of new recruits is sent to fight against corsairs (pirates). They find out that these corsairs are paid by Varesh Ossa, war marshal of the neigbouring country of Kourna. Istan declares war on Kourna and the Sunspears attack to defend Istan from Varesh, but they are defeated by Varesh's army and the demons that she had summoned. The Sunspears have to flee to a secret sanctuary. Varesh apparently worships the exiled god Abaddon. She wants to bring Nightfall upon Elona and free Abaddon from his chains to gain power.

Abaddon once gave the gift of magic to humans but this resulted in wars. The other five gods limited the use of magic by humans to make peace again, but Abaddon disagreed with this and started to fight the other gods. When he attacked the Gates of Heaven in Elona, he was cast down and banished to the Realm of Torment.

The Sunspears find a way to the country of Vabbi, where they search for allies, aided by the mysterious Order of Whispers. Unfortunately, Varesh attacks the princes of Vabbi before the Sunspears can convince them. The princes either are killed or flee, which drives Varesh's general away and he tells the Sunspears that Varesh is on her way to the Mouth of Torment where the gods have struck down Abaddon.

Aided by Palawa Joko - an undead and the greatest Necromancer of all time, who was once defeated by Varesh's ancestor Turai Ossa - the Sunspears manage to cross the Desolation and reach the Mouth of Torment. Nightfall has already reached Elona and Kormir, leader of the Sunspears, dies. They manage to overcome Varesh, but Abaddon still gets stronger and stronger.

The Sunspears travel deep into Abaddon's realm. They free the souls that have been captured there and defeat Abaddon's allies: Shiro Tagachi and the Lich Lord2. In the end, they stand before the dark god himself. He is defeated and the spirit of Kormir takes his powers, becoming Goddess of Truth, Knowledge and Secrets.

At the delta of the Elon river – the life source of Elona – lies the province of Istan on several small islands. Huge statues of spear fighters guard the towns that bring to mind Egyptian temples. Here the primeval kings built their first city, and the remains of that time can still be found everywhere. The first city itself is decorated with huge heads that have a stunning resemblance to Nefertiti. Frogs croak in the swamps and rich vegetation can be found all over the country.

Kourna is a country of deserts. Few but impressive trees grow in the red and yellow sand while cicadas chirp in the heat of the sun. Rhinos and big apes search for the greener areas at the water holes. The human inhabitants of Kourna live in small villages surrounded by fences. Their houses are made of red clay often resembling painted termite mounds; the taller buildings are reinforced with wooden poles - quite similar to the mosques in Niger. Richer houses resemble Moroccan buildings: high, rectangular shapes with reinforced corners. The presence of the Kournan army can be seen at the many stone fortresses that are built on rocks, overlooking the country.

Where the Elon river has carved many canyons out of the dry stone lies Vabbi. The Vabbians have created rich oriental towns in the desert. Magical fountains cool the air of the big market places. Ornaments and shimmering blue tiles decorate the buildings of the rich, which are crowned with golden, onion-shaped domes. Here the richly dressed and well fed Vabbians find protection from djinns, harpies and other creatures.

When Abaddon was exiled, much of Elona was poisoned; this is now the Desolation. The Sulphurous Wastes make almost all life impossible. It is the land of the undead and some huge – but mostly friendly – desert wurms. All of this land was once under control of Palawa Joko; today only the ruins of his reign are left and Abaddon's demons have invaded the land. Under a dark sky that shows the closeness of Nightfall, the sand of this desert glows in a nasty yellow colour. The ancient ruins resemble Zikkurats3 and Palawa Joko and his men have quite a Babylonian appearance.

The Realm of Torment is the prison of Abaddon and other corrupted souls. It is not part of the mortal world. Slowly Abaddon's influence grew and infested the gates which were meant to imprison him. It is a dark place, almost silent, and the strange lighting gives everything an unnatural colour or almost no colour at all. Much of this place shows Abaddon's vision of what Elona would look like after Nightfall: it is still recognisable, but everything has turned darker, and more demonic. Abaddon's influence is also visible in huge, organic structures that grow at the infested gates.

There are two professions unique to the Nightfall campaign in addition to the basic professions from Prophecies.

Nightfall has only one elite mission, which is situated in the Realm of Torment. Mallyx the Unyielding is a demon who leads the last bastion of Abaddon. He and his demons fight the new goddess Kormir, which makes it necessary to dispose of him.

At the time of writing this Entry, no Guild Wars Beyond content has been released for Nightfall, but ArenaNet said that they are working on something. The story will be centered around Palawa Joko who, only 60 years after the events of Nightfall, invades Vabbi, Kourna and Istan with his undead army. To weaken these nations, he dams the Elon river, causing droughts in Vabbi and Kourna while turning part of the Crystal Desert into an oasis.

250 years later, Palawa Joko still rules over Elona. All descendants of the Ossa family are killed and only a few Sunspears remain.

And a Hero Shall Lead Them

Nightfall is probably the most difficult campaign of Guild Wars and has the shortest tutorial. It is not a good place to start, especially not for inexperienced players. The big advantage of Nightfall is the availability of most heroes in the game, which makes playing the other campaigns with a character created in Nightfall a lot easier.