Ear, Nose and Throat Surgery - An Overview Content from the guide to life, the universe and everything 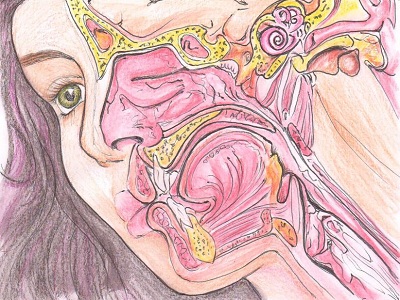 As the name suggests, ear, nose and throat surgery takes in several rather important parts of the body. All three are connected anatomically and share some of the same nerves, infections, tumour types and susceptibility to having things get stuck in them; thus knowledge of all three is required to treat any one of them. They also share the head and neck with many other important structures, and ENT surgeons can be found working alongside eye doctors, oral surgeons, brain surgeons and plastic surgeons depending upon the problem being treated.

A consultant ENT surgeon will have spent a few years first experiencing the broad range of medical and surgical specialties, and then as a general surgical trainee, before specialising in ENT to complete their training. Though they are doctors, they will have membership of one of the Royal Colleges of Surgery and are referred to as Mr (or Miss), in reference to the days when so-called barber-surgeons did not actually hold a medical qualification. However, a large part of the ENT surgeon's work is in fact medical rather than surgical; if surgery can be avoided by judicious use of drops, sprays, tablets or time, then the surgeon will happily avoid the risks involved in taking the patient to theatre. As a result, ENT surgeons split their time mostly between outpatient clinics and the operating theatre, though they do also have inpatients on the wards.

How to Avoid the ENT Surgeon

ENT surgery is such a broad field that this entry, were it to elaborate on every disease mentioned, would easily fill a textbook. Common presentations to the ENT surgeon are with hearing loss, ear pain or discharge, nosebleeds, nasal obstruction, airway obstruction, hoarseness, swallowing problems, recurrent tonsillitis, facial weakness or pain, neck lumps, and individuals who believe they have something stuck in their throat.

The external ear can be damaged through trauma, or may need attention due to a sinister growth. Ear infections are common, as are foreign bodies and wax impacted within in the ear canal. Common ear complaints include hearing loss, ear pain, discharge from the ear, vertigo and tinnitus.

Ear pain and discharge are commonly the result of infection. Ear canal infection (otitis externa) may follow the insertion of a foreign body into the ear, but is also more common in swimmers due to water entering the ear. The infection may be bacterial or fungal, and is treated with a combination of cleaning (in the clinic), pain relief and eardrops. Middle ear infection (otitis media) occurs behind the eardrum and may result in one of several clinical pictures:

Hearing loss has many causes. Conductive losses occur when there is reduced conduction of sound to the inner ear – causes include ear wax, infection, ear drum perforation and otosclerosis1. Sensorineural losses are due to problems in the inner ear – noise-induced damage, age-related hearing loss (presbycusis), drug-induced damage (ototoxicity), and genetic conditions. Treatment of hearing loss thus depends upon the cause, though in many cases a hearing aid of some sort is useful. Cochlear implantation may be used in severe hearing loss, and involves the placement of an electric wire in the inner ear to transmit sounds from a receiver placed behind the ear.

Tinnitus is a common accompaniment of hearing loss, though it can occur in isolation. There is rarely anything major that can be done to stop it. If it continues to cause distress once any reversible causes of hearing loss have been treated, the tinnitus can be masked using a background noise generator or a hearing aid.

Vertigo, a form of dizziness in which the room seems to spin, typically indicates a disease of the balance systems in the middle ear. Causes include benign paroxysmal positional vertigo, which causes sudden bouts of dizziness in certain positions; Ménière's disease, which involves attacks of vertigo, hearing loss and tinnitus that last for several hours; and acute labyrinthitis, a viral infection of the inner ear that can cause balance problems lasting for days or even weeks. Treatment depends upon the condition, but anti-vertigo drugs and bed rest are useful during an acute attack.

Nose bleeds (epistaxis) represent a common emergency for ENT surgeons, requiring anything from pinching of the nose to cautery, packing, or tying of blood vessels in theatre. Those inclined to do so may insert a variety of foreign bodies into the nose; it then becomes the ENT surgeon's job to remove them. Broken noses also feature regularly and should be seen straight away, although the development of swelling within the first ten minutes post-injury means they are best reset either instantaneously (by skilled hands only!) or else 7-10 days after the injury.

Far from being simple tubes, the nasal passages actually contain several scroll-shaped ledges (turbinates) that protrude from the side walls, and act as heat and moisture exchangers. They also guard the entrances to several sinuses that exist within the bony structure of the face. As a result, there are many problems that can occur within the nose, ranging from simple hayfever (allergic rhinitis), to obstruction of the nasal passages by a deviated septum or enlarged turbinate, to infection of the sinuses. Such problems are usually dealt with by first trying medical treatment such as nasal sprays, and moving to sinus surgery if imaging of the nasal passages suggests a potential benefit. However, in rare cases where a sinus infection spreads to affect the eye (periorbital cellulitis), sinus surgery may need to be performed urgently to prevent loss of vision. The nose can also suffer from a range of polyps and growths, which may well require removal. Sinus surgery techniques can also be used by brain surgeons to enter through one of the sinuses to operate upon the pituitary gland, an important structure within the skull that is closely attached to the brain.

Infection of the tonsils often requires only supportive treatment, but can require admission to hospital if the patient cannot eat and drink normally. Tonsil infection can also occasionally spread to produce a quinsy – an abscess next to the tonsil which requires drainage and antibiotics. For those suffering repeated infections, removal of the tonsils can provide some relief, though it neither reduces the incidence of infection, nor has any negative effect on the immune system. Stones may also occur within the tonsils, as well as in the salivary glands.

Benign and malignant growths can occur in the palate, tongue base, tonsils, parotid glands, salivary glands, throat and voicebox, leading to the need to investigate a variety of lumps in hard to reach places. Such places may also become infected and swollen, requiring antibiotics and anti-inflammatories, or may fall victim to foreign bodies such as a fishbone in the throat, or a lump of steak stuck in the airway. Such problems require treatment urgently, especially if they are causing airway problems. On occasions where the voicebox is obstructed by swelling or a foreign body, it may become necessary to create a tracheostomy – an opening in the neck leading directly into the windpipe. Tracheostomies are also used for patients needing long-term ventilation for other reasons, and permanent tracheostomies are created if the voicebox must be removed due to a tumour.

ENT surgeons may also specialise in voice disorders, using special equipment to look at the function of the vocal chords, or swallowing disorders, which may be affected by various disorders of the throat, gullet or even the nervous system.

A variety of neck lumps will also be seen by the ENT surgeon, ranging from abscesses and infected glands, to anatomical problems present at birth, to cancer that has spread from various parts of the mouth and throat to the nearby neck glands. The thyroid is a particularly important gland in the neck, as it can under- or over-function, become swollen for a variety of reasons, and also develop lumps which may be either benign or malignant.

ENT surgeons are also responsible for looking after problems with the facial nerve – the nerve that controls the muscles of facial expression – as this may be affected by skull fractures, ear conditions, parotid gland disease or viral infection.

ENT surgeons use a variety of tools and equipment, generally relating to the need to see inside the ears, nose, throat or voicebox, and to perform whatever procedure is necessary. This means that the average patient seen in clinic will have some part of them examined with a bright light, and may also have some form of instrument or scope passed depending on the condition with which they present.

Ears are inspected in clinic using a simple handheld otoscope similar to that used by GPs, but can also be viewed in detail under an operating microscope – a combination of small instruments, suction and ear drops can then be used to clear out the ear canal. Similar equipment is used in theatre to operate on the eardrum and middle ear structures.

The nose can be viewed using a simple headlight and a nasal speculum or 'thudicum', which simply holds the nostril open a little. However, a much better view can be gained using small scopes, both rigid and flexible, which can be passed into the nose in clinic. The nose is first sprayed with a decongestant and local anaesthetic, following which the scope is passed through the nostril. While rigid scopes can see only to the back of the nose, flexible scopes can bend downwards at this point to look down upon the throat, including the tongue base, epiglottis and vocal cords. Rigid scopes can also be used in theatre along with various instruments to perform sinus surgery.

ENT surgeons will often look in the mouth, using tongue depressors and also a gloved finger to examine the tongue, palate, cheeks and salivary glands. As well as using a flexible scope, the voicebox can be seen with a dental mirror placed carefully toward the back of the throat, taking care not to make the patient gag. Tricky foreign bodies known to be further down in the throat can be reached using rigid scopes that can be passed through the mouth and into the gullet, though these naturally require a general anaesthetic.

As for neck lumps – these are usually accessible from outside rather than in, though they are sometimes manifestations of problems within the mouth, airway or throat. The most straightforward examination of these is to feel them, following which the patient may need to be sent for a neck scan. Some suspicious lumps can be sampled in clinic using a fine bore needle to remove a few cells, which are sent to the pathology lab for close examination.

ENT surgery covers a wide range of problems involving various complex parts of the human body. Given the right equipment, the ENT surgeon can reach otherwise inaccessible areas to remove anything from chicken bones to tumours. ENT infections can range from nuisances to those that threaten to obstruct the airway or spread to the eyes or brain, and foreign bodies can produce life-threatening scenarios requiring their immediate removal from difficult places. Thus ENT can present experiences from the pedestrian to the extreme, and requires a great deal of knowledge and technical skill.

1This is due to fusion of the stapes, one of the small bones of the ear, to the window of the inner ear in which it sits. This reduces sound conduction, and can be treated surgically.