Roman Shields Content from the guide to life, the universe and everything 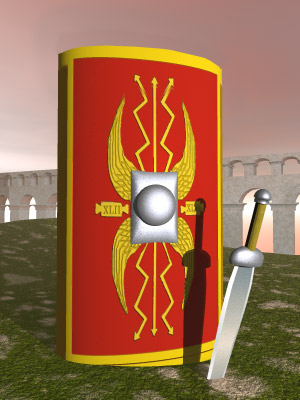 The Roman Legions were one of the longest lasting professional armies in Europe. The legions existed for nearly 2,000 years, from the rise of the Roman Republic in 509 BC to the final collapse of the Empire at Constantinople in 1453.

Over that time, weapons and shields changed. The rectangular Roman shield, made famous by the Asterix comics, was used for very roughly 700 years, between 300 BC and 400 AD. Nobody knows for certain about the exact details of the shield, because they were made of wood and none survive. Statues and mosaics show that the early and later legionaries carried round shields, but art and life are not always the same thing. However, in weapons, form follows function and the rectangular shield probably came into use when the army abandoned the Greek and Etruscan 'phalanx' mode of fighting and developed its own technique.

Apart from the javelin, which was thrown early on in a battle against the charging enemy, these weapons were for very close-in fighting, one or two feet (30-60cm) from the opponent. This meant that the Roman soldiers crowded their opponents, preventing them from using big, swinging weapons. The legions crushed their enemies physically with the wall of shields pressing down on them and jabbing their short swords through the gaps.

That the shields were called scutum, from the Latin word for 'great force', wonderfully describes the Roman way of fighting and the shield's use on the battlefield.

The heavily shielded front troops formed a wall with no gaps and the soldiers behind them could hold their rectangular shields over their heads to form a roof (note that this manoeuvre called the tortoise was not used in general combat). The legions practised walking in continuous lines over all sorts of terrain and filling gaps when companions fell over. Armies facing the wall, if they were using javelins, arrows, slings or long, swung swords, could not get their hand-wielded weapons to hit any of their enemy. Even cavalry horses charging towards the legion would shy away if the wall of shields remained steady.

Only when the legionaries were an arm's length from their opponents did their stabbing swords shoot out between the shields.

Being in and behind the wall, watching horribly beweaponed enemies charging down, was often as frightening as being on the other side watching the wall approach. Soldiers fighting the Roman legions were often skilled professionals who knew what they were doing. The wall only worked if it remained unbroken - if a gap appeared, then arrows, javelins and other weapons could do tremendous damage.

The Roman generals valued an unbroken wall of shields so much that they threatened to kill one in every ten men from the first unit in a legion that broke the line. This threat, called decimation, was fulfilled often enough that most Roman soldiers took their chances advancing on the enemy and keeping their shields up and close together.

The shield was made of glued sheets of a hardwood ply. To stop it splitting when it was struck by a sword or axe, the plywood sheets were pasted together with the wood grain at angles so that they never lined up. The shields were very light and could not be split, even by hitting them on the edge. They were decorated by a hide covering and a metal edge but these were probably more to keep the ply-woods and their glues dry than to prevent war damage.

The shield's handle straps were attached in a cut-out circular section in the middle. The cut-out was covered with a domed piece of metal known as a 'boss', which was firmly stuck to the surrounding plywood. The metal boss was not appreciably stronger than plywood but it could be shaped to cover the arm and hand holding the shield.

Using Shields as Weapons in Battle

There is more than one way to disable an opponent in battle. A broken leg or dislocated knee will completely prevent someone from fighting. In very close fighting, jamming the sharp edge of a large, square shield down on the extended leg of your opponent or shoving it upwards, breaking their jaw, would destroy them as effectively as a well-placed sword thrust. The shield was a very effective weapon as well as a defensive tool. Modern soldiers who have used Roman weapons have said that in very dirty, close-in fighting, they would lose their sword before their shield when it came to killing and disabling their enemies.

Roman foot soldiers' sandals had an array of half-inch nails sticking out of the bottom. These were as effective as footballers' boot sprigs when walking over rough ground. They were also deadly to an enemy lying on the ground after being incapacitated by the shield.

Most battles are won by masses of troops in close-in fighting, even now. However, not all are.

The Roman Empire, in its various forms, lasted for such a long time that some of its earliest enemies charged at its legions screaming, naked and covered in blue woad while its ultimate enemies used cannon and gunpowder. War evolves over time and different techniques suit different technology. When it comes to staying alive, winning generals and soldiers (that is, those who get to grow old) show themselves capable of amazing adaptations of the existing technology.

In pre-gunpowder combat, another way to fight is to keep a good distance between combatants and allow skill and the weapon choice of each to determine the victor. David defeated Goliath, in a one-on-one battle, by using a sling and stones against the much more heavily armed man with sword and shield. Goliath's shield could not protect him forever against a darting opponent who could take long distance shots against him for ever.

An elephant or two could break through a wall of Roman legionaries; then armies using heavy, bigger weapons with longer reaches could do amazing amounts of damage. Horse cavalry and chariots could outflank the battle lines of a legion with their speed and come in from behind. A chariot could carry a number of men with a number of weapons, some of them quite heavy.

The Roman legions themselves travelled with their auxiliary troops and cavalry so that they too could fight in different styles if required. The legions were often a long way from their permanent camps and could not re-arm to match the enemies against whom they were pitted. Their enemies, on the other hand, were often at home and could adjust their styles and weapons to suit their attack against the approaching legions.

Finally, it took a lot of practice to keep the shield line tight when going over rocky ground, through streams or bogs, or when faced with fleet individuals armed with slings and stones or with a couple of charging elephants. The Roman army's appetite for practising manoeuvres is legendary. Their style of fighting was professional in the true sense of the word: Roman soldiers signed on for 20 years and were paid for every day of that time. The Empire, for much of its life, always kept more than a dozen legions in the field. At nearly 10,000 men per legion, the government required a huge tax base to keep the legions paid. Few of their enemies could consider keeping an army remotely as trained as the Romans.

The traditional scutum was gradually abandoned as the legions became more mobile over the centuries. The Empire had settled borders and the army no longer needed to move huge legions to fight big battles. Instead, the legions sent out battle parties to protect the borders and fight off skirmishers. The shield is too big for soldiers moving quickly on horses; new weapons, armour and shield styles were required.

Once gunpowder from China was combined with European iron working, the gun and canmon become potent weapons. No shield effectively protected massed lines of troops and the walls of New Rome, or Constantinople as we now know it, fell to the new weapons. Thus in 1453, with the final end of the Roman Empire, also came the effective end of the era of the shield, spear and sword.