The Naval and Coastal Defences of Roman Britain Content from the guide to life, the universe and everything 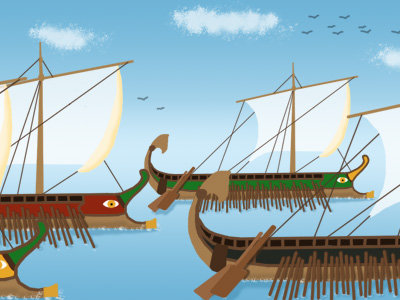 The Romans appear to have first developed a Navy in response to the threat from Carthage which, being in North Africa, was only accessible to Rome by sea. Great Britain, however, gave a greater challenge, because the Atlantic Ocean was a much more serious body of water than the Mediterranean Sea. To invade Britain, the Romans had to set up a completely new ocean-worthy fleet, the Classis Britannica, which was subsequently used for the protection of Roman Britain from invasion. In addition, a series of Roman Forts were built along the coasts of Britain, which are known as the Saxon Shore Forts. This Entry gives what little is known about both the fleet and the forts.

Perhaps the best known of all the Roman fleets, the Classis Britannica or 'Fleet of Britain' was created in 41 AD, in the port of Gesoriacum (modern Boulogne-sur-Mer, France). This fleet's purpose was to provide support for the invasion of Britain of 43 AD. The invasion force was 'led' by Emperor Claudius (from behind, in Rome) and General Aulus Plautius (from the front, in Britain). After the successful crossing of the Oceanus Britannicus, the English Channel, the 40,000 soldiers made landings on the Kent coast at Richborough1, Dover2, and Lympne3, establishing a beachhead about 30 miles wide. The fleet was again in action supporting the crossing of the Thames, and later in providing an escort for Emperor Claudius in 46 AD when he visited Britain, transporting his Praetorian Guard and the elephants for his triumphal entry into Camulodunum, modern Colchester.

The Classis Britannica started to establish bases around Britain such as Portus Adurni - Portchester, Anderida - Pevensey, Portus Lemanis - Lympne and a fleet anchorage at each end of Hadrian's Wall: at Maia - Bowness and Arbeia - South Shields. In the push north of 83 AD, the fleet carried out raids along the eastern coast of Scotland in support of the advancing legions.

Between the years 84 and 86 AD, it seems likely that the home port of the fleet was transferred from Gesoriacum to either Rutupiae (modern Richborough) or, more likely, Dubris (modern Dover). However there is a possibility that Gesoriacum on the coast of Gaul remained the home base, as it was much the largest of the three.

The fleet also accomplished the first circumnavigation of Britain, discovering the Orkneys in the process.

The province of Britain was isolated enough that in 286 AD, a commander of the Classis Britannica named Carausius decided to break with Rome and declare himself Emperor of Britannia and northern Belgic Gaul. This was when he was accused of conspiracy with pirates from Germany and France4. It is an indication of the formidable strength of the British fleet that it defeated a combined fleet from the bases in Germany and France that were sent against it. In 296 AD, the revolt was ended when Carausius was assassinated by a subordinate named Allectus; this presented the opportunity for an Imperial force to make a landing. Britain was regained by Constantius in 296-7 AD, and was fully pacified and reinstated in the Empire by 300 AD.

During the reign of Constantine I (306–337), many of the coastal bases in the south and southeast of the island became an independent command referred to as the Litus Saxonicum, the Saxon shore defences. The commander of the Litus Saxonicum was given the title of Comes Littoris Saxonici per Britanniam, meaning 'Count of the Saxon Shore'.

The number of forts and their locations gives us a good indication of the threats to the province that existed at the time. The main dangers were to the section of the south coast from Hampshire to Dover, and the entire east coast as far north as the eastern end of Hadrian's Wall at South Shields.

There were nine strong forts at strategic points along the coast, which were listed in an official Imperial document known as the Notitia Dignitatum:

There were also forts located at Bradwell, Caister and Walton situated at the mouths of the Rivers Orwell, Deben and Stour off Felixstowe. All three forts are now lost due to coastal erosion. Further forts were at Carisbrooke and possibly at Bembridge on the Isle of Wight as this provides a fine sheltered anchorage on the eastern side of the island. There was a base at Clausentum near Bitterne on the outskirts of Southampton. There is also evidence of bases in Wales at Cardiff and Holyhead and in Devon in Topsham.

On the vulnerable northeast coast, there is evidence of a chain of five watchtowers located at Filey, Scarborough, Ravenscar, Goldsborough and Huntcliff. This coastal defence relied upon the deployment of forces by road. Troops from Lindum (modern Lincoln) could reach the area on Ermine Street via the Roman ferry across the Humber estuary from Wintringham to Brough-on-Humber. All the forts appear to have been linked by signal stations and watchtowers to local and legionary garrisons such as the ones at Lindum and Eboracum (modern York) and Corstopitum (modern Corbridge) located on Hadrian's Wall.

The forts in Britain were supported by a chain of forts along the coast of France from Nantes to Oudenburg in Belgium, including a base on Alderney on the Channel Islands. The bases on mainland Europe were also listed in the Notitia Dignitatum and are as follows:

All units listed as the garrison in the forts were listed in official documents such as the Notitia Dignitatum.

Although not listed in the Notitia Dignitatum, the final fort in the chain appears to have been Oudenburg in Belgium. Although there is little remaining evidence, it is reasonable to expect that the forts would have been connected by signal stations and watchtowers with supporting garrisons, as in Britain.

Possible Locations of other Bases in Britain

The Classis Britannica was likely to have had more bases than those listed in the Notitia Dignitatum. There is remaining evidence of some bases, and the locations of other remaining forts and settlements, together with the geography of the British coast make it possible to suggest the most likely locations for bases. These are at the following places:

Exeter (Isca Dumnoniorum) the tribal capital of the Dumnonii, is situated on the river Exe just three miles from the major port of Topsham. The port of Topsham was originally intended to provide a supply port for the Legion II Augusta based in Exeter. The port was situated on the Fosse Way which ran north from Exeter. This and other Roman roads provided the settlement with a direct link to London and Lincoln. Owing to the importance of this settlement, it is conceivable that this was at least a possible fleet anchorage, probably a base linked to the legionary garrison.

Poole was established by the Legio II Augusta before they moved on to Exeter. This was a fort and a Roman port that traded with Gaul; the exports were local sea salt, shale and limestone. If you look at a map you will see this is a wonderful natural harbour and a very strong candidate for a fleet anchorage.

Harwich on the estuaries of the Stour and Orwell rivers: these were a major route inland via the rivers in the area. A legionary fort stood at Walton on the northern shore of the estuary. This was an important settlement that would have needed protection from raiders and would have probably been a fleet anchorage.

Whitby (Dictium) was listed in the Notitia Dignitatum as the site of a Roman signal station. There is a post-Roman reference to Whitby as Streanæshealh or lighthouse bay. This could indicate the signal station was still standing or in use. There was also a fort recorded in the area. It is reasonable to conclude that a base of some sort could have been established.

The Tees estuary and the area around Catcote overlooking the estuary has evidence of both bronze age and Roman settlement. The area has excellent farming land and after the completion of Hadrian's Wall, trade in the area developed. The settlement developed into an important (if minor) trading port. It is possible there was an anchorage or a base linked to a garrison in the area.

1The 9th Legion Hispana and 14th Legion Gemina Martia Victrix landed here, with Plautius in command.2The 20th Legion Valeria Victrix, the commander of which was not recorded.3The Legion II Augusta, with Vespasian in command.4And sentenced to death by Rome.