Rick Allen - Def Leppard's Drummer Content from the guide to life, the universe and everything 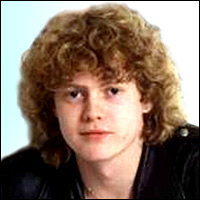 Few celebrities in today's image-driven society are truly unique and inspiring. Rick Allen is one of those few. Famous as Def Leppard's 'one-armed drummer', Rick did not let the tragedy of losing an arm keep him from pursuing his passion of playing drums. Through determination and hard work, he overcame the odds and made one of the greatest comebacks in rock n' roll history, earning him the nickname 'The Thunder God'.

Richard John Cyril Allen was born in Derbyshire, England on 1 November, 1963 to Geoffrey Allen and Kathleen Daly. He received his first drum kit at the age of ten, after promising his mother he would pay for half of the kit and stick to his drum lessons. He joined his first band, Smokey Blue, at the age of 12.

In 1978, Rick read an ad in the newspaper titled 'Leppard Loses Skins' telling of a local band's search for a new drummer. He auditioned and, at the age of only 15, became Def Leppard's drummer, replacing Tony Kenning. When the band signed a recording deal with Phonogram in 1979, Rick's father had to sign for him as he was still underage. Rick then dropped out of school to become a full-time drummer, and the band started a tour opening for AC/DC. He celebrated his 16th birthday during this tour.

On New Year's Eve, 1984, following the tremendous success of Pyromania, Rick and his then-girlfriend Miriam were speeding along a road outside Sheffield when he took a turn too fast and lost control of the car. His car, a Corvette Stingray, overturned and Rick was thrown from the vehicle. Miriam escaped without serious injury, but Rick's left arm was severed at the shoulder, torn off by the seatbelt as he was thrown. He was rushed to Royal Hallamshire Hospital, where he underwent two surgeries to reattach the arm. At first the effort seemed successful, and several reports from that time showed optimism for his condition. However, within days an infection set in and it became apparent that the arm would have to be amputated.

Losing an arm is surely one of the worst things that can happen to a drummer. At the age of only 21, it seemed that Rick's career with Def Leppard was over. However, within two weeks of waking up in the hospital, he began thinking of ways to get back behind the drums and play again. Nurses had placed a Styrofoam block at the end of his bed to help him adjust his position, and out of boredom, he would use it to tap out a rhythm with his feet. This was his first step towards playing again. He began to design a new drum kit that utilised electronic foot pedals he could hit with his left foot to trigger single or multiple drum sounds. Within months of the accident, Rick was out of the hospital and working on relearning to play the drums on his new custom-made kit, while the rest of the band continued recording their next album, using drum tracks Rick had laid down before the accident. The band never considered dropping Rick; instead they allowed him to work through this difficult time and make the decision to stay or leave for himself. This support from the band was all he needed to make his comeback.

Rick's public debut as a one-armed drummer came in 1986. Taking a break from studio work, the band was scheduled to play on the Monsters of Rock Tour. In order to get ready for the tour, they played several small gigs in Ireland, in which drummer Jeff Rich was brought in to play alongside Rick as insurance. However, between gigs, Jeff had to leave to play for his own band, Status Quo. One day, he missed the plane back to Ireland and arrived late for Leppard's gig. Rick had to go on stage alone, and he did so well that when Jeff did show up and take the stage in the middle of the show, singer Joe Elliott 'didn't notice'1. At the next gig, Rick took the stage alone once again, while Jeff stayed in the audience listening for any signs that Rick was having trouble. He found none.

The official debut came at the first Monsters of Rock show at Castle Donnington on August 31. Rick played the set completely on his own, and he received a huge welcome from the audience after being introduced by Joe.

'I had never seen so many hands go up in the air! I just sat there behind the drums and burst into tears.'
-Rick Allen, on the Donnington Festival 19862

Rick has one daughter, Lauren Shane, with ex-wife Stacey. Rick Allen and Lauren Monroe, whom he married in 2003, founded the non-profit Raven Drum Foundation in 2000. Raven Drum's mission is to 'provide free educational programmes in the arts and opportunities for personal growth in times of adversity'. Based in Los Angeles, the Foundation helps a wide range of people through the power of music and spirituality. In 2001 Rick was given the Humanitarian Award for his work with the Foundation.

Rick Allen continues to record and tour with Def Leppard, using a combination of electronic and acoustic drums to achieve the best sound. And though many people may come to a Def Leppard show to see the 'Thunder God' in action, once the band takes the stage, it is easy to forget you are listening to the world's most famous one-armed drummer.