Fortifications of the Isle of Wight - Freshwater Redoubt Content from the guide to life, the universe and everything 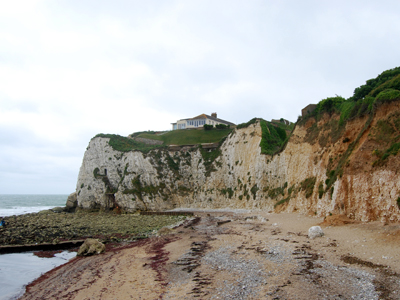 One of the earliest of the Victorian forts on the Island – after the coastal batteries Fort Albert and Fort Victoria – Freshwater Redoubt was built following the 1851 invasion panic1. This invasion panic had a particular impact on the western Solent. Three new forts were constructed on the Island – Fort Albert, Fort Victoria and Freshwater Redoubt – and Hurst Castle on the mainland at the end of the Hurst Spit was modernised.

The river Yar divides the west Wight, all but isolating the Freshwater peninsula from the rest of the Island. Freshwater Bay, a 300-yard wide bay on the south coast, represents the only flat landing spot in the Freshwater peninsula where an invading army would not have to climb a cliff immediately on landing. In 1855-6 it was decided to build a small fort, known as a redoubt, above the bay to prevent forces from landing at Freshwater and heading north to attack Fort Albert and Fort Victoria from behind.

The redoubt was built 60-90 feet above sea level on the western headland overlooking the beach, on top of what had been Freshwater Cave – the cave was built up in order to support the weight of the redoubt above it.

The redoubt was roughly diamond shaped, with the south and east sides armed by the Lower Battery facing east, covering Freshwater's beach, and the south side armed with the Upper Battery, covering out to sea. The steep cliff below was considered impossible to climb by enemy troops. The north and west sides faced inland, where the gorge or back of the fort was protected by a deep, dry brick-lined ditch covered by a corner caponier2 in the north east corner, which also defended the entrance to the redoubt over a drawbridge. In the centre was an open Parade area.

The two-storey caponier also served as a barrack for up to 24 soldiers, with rifle slits enabling defenders to fire at attackers. It was reached via a vaulted stairway from the parade ground. Also on the north side was a small guard room, and on the north-east corner was a banquette, or infantry firing step, to help protect the redoubt from attack.

It was along the west side that the redoubt's cookhouse, store rooms, including cartridge and shell stores, were located in vaulted bombproof rooms, as well as a tunnel to the south side. Here, underground, a shell-filling laboratory was added in 1861 for the Armstrong guns, which included a hoist lift to the upper battery above.

The redoubt's east side consisted of the Lower Battery. This was 60 feet above sea level and covered the beach. Initially this was armed with three 8-inch smooth-bore howitzers designed to fire shrapnel against landing parties. In 1891 these were replaced with two 6-pounder Quick-Firing guns and a .45 inch maxim machine gun. A magazine was also located on the lower battery's southern corner. The lower battery was separated from the rest of the fort by a protective chalk bank, known as a traverse, designed to aid the defence of the rest of the fort from fire aimed at the lowest and most easily reached part of the redoubt.

Just north of the Upper Battery was a one-storey brick barracks or accommodation block used originally to quarter officers and Non Commissioned Officers (NCOs). In 1936, after the fort was no longer in service, this barracks was converted into a two-storey house.

History of the Fort

The fort was built in 1855-6. In 1861 Queen Victoria and her four year old daughter Princess Beatrice, who lived in Osborne House in nearby East Cowes visited Freshwater Redoubt, invited by the wife of Colonel R. B. McCrea, Royal Artillery. The original peacetime compliment consisted of a master gunner, one bombardier and five men, plus three men's families.

The original two Upper Battery 68-pounder flank guns were replaced in 1861 with 7 inch Armstrong rifled breech-loading guns, and the shell-filling laboratory was added. In 1871 an officer, his family and 33 men of the 99th Regiment of Foot were billeted in the fort, and a new house for married soldiers was built just north of the ditch.

The two central Upper Battery guns were replaced in 1876 with two 64-pounder rifled muzzle loaders. In 1888 these guns' mountings were converted so that rather than fire through embrasures, the guns now fired over the fort's parapet.

In 1889 a report was published in which concern was raised whether the fort would withstand a direct assault from an enemy ironclad ship, recommending that Freshwater Redoubt be replaced by a high-angle battery behind Tennyson Down or further west – however, nothing was done about this. Instead, the redoubt's armament was improved. In 1891 the lower battery's with three 8-inch smooth-bore howitzers were replaced with two 6-pounder Hotchkiss quick firing guns and a .45-inch calibre Maxim3 machine gun. The Upper Battery's outer two 7-inch Rifled Breech-Loaders were removed in 1893 but the planned replacements, two 4.7 inch quick firing guns, for which the battery was to be remodelled to be able to mount, never arrived. Their installation was cancelled in 1898.

In 1903 two mobile 5-inch howitzers were stored at the redoubt, ready to be moved into action should an enemy invade at any point in the nearby coastline. An artillery shed was built outside the battery and the laboratory was converted into a cartridge store for these guns. In 1907 the three 6-pounder quick firing guns were removed from the Upper Battery and in 1908 the two 12-pounder were removed and went to Fort Albert. In 1909 the new accommodation block was also condemned.

During the Great War the fort was manned against attacks from German raiding parties, using detachments of troops stationed at the New Needles and Warden Point batteries. The wartime garrison consisted of 2 officers and 29 other ranks.

Only the Lower Battery was armed, and in 1915 the two 6-pounder quick firing guns were sent to Culver Battery and replaced with two 12-pounder quick firing guns from Fort Albert. A battery command post was positioned at the south-east corner of the fort. These only lasted until February 1916 before being removed to Woolwich, and were replaced with two 15-pounder quick firing field guns. These were German guns bought for use during the Boer War of 1899-1902 and were now being used to defend against an attack from their home country. These were the fort's last weapons and remained until March 1918. Also in 1916 the fort's drawbridge was replaced. In March 1918 the fort was disarmed and the two field guns and machine gun were removed. It was felt that the redoubt was too small to mount the larger, more modern weapons now in use.

In 1928 the War Officer sold Freshwater Redoubt to Mrs Amelia Bowland Cross for £600. In November 1935 it was bought by Mr Crinage who in 1936 added a top storey to the officer's quarters to convert it into a house, which was used as a summer retreat. Mr Crinage demolished the old latrine block, cut back the cliff to improve the sea view and converted the fort's water tank into a swimming pool. In 1937 he even employed an out-of-work violinist to dig a tunnel for bathing access to Watcombe Bay, a small bay next to Freshwater Bay, from the Lower Battery's ammunition store.

Between 1940-43 the fort was guarded, but not occupied, by the army, who dug two defensive trenches near the Battery Command Post, which were later manned by the Home Guard during the remainder of the war. In 1970 an American millionaire, Dyron De Witt, bought and briefly visited the redoubt before it was sold on in 1972 to local property developer Mr Figgins. He began to build a large sun lounge over the lower battery's gun emplacements to make the most of the splendid view over Freshwater Bay and the little Needles, but died before this was complete. In 1977 Mr and Mrs Longmore bought the property and opened a tearoom in the lounge in July 1984, which boasts the best views in Freshwater.

Freshwater Redoubt is in the Isle of Wight's Area of Outstanding Natural Beauty and is located on the Tennyson Heritage Coast, near the Isle of Wight Coastal Path. It is a Grade II Listed Building.

Influence On The Charge Of The Light Brigade

Poet Laureate Alfred Lord Tennyson moved to Farringford House in Freshwater in 1853. During his time there he wrote many of his most famous poems, including The Charge of the Light Brigade, first published 9 December, 1854. During the time he wrote it he saw his peaceful village being turned into a military garrison and, by time he wrote his famous poem, three works – Fort Albert, Fort Victoria and Freshwater Redoubt – were being constructed within a short walk from his home. It is possible that his experience of hearing the test firing of Freshwater Redoubt's guns helped to inspire his most famous poem.

"Forward, the Light Brigade!"
Was there a man dismay'd?
Not tho' the soldier knew
Someone had blunder'd:
Theirs not to make reply,
Theirs not to reason why,
Theirs but to do and die:
Into the valley of Death
Rode the six hundred.

Flash'd all their sabres bare,
Flash'd as they turn'd in air,
Sabring the gunners there,
Charging an army, while
All the world wonder'd:
Plunged in the battery-smoke
Right thro' the line they broke;
Cossack and Russian
Reel'd from the sabre stroke
Shatter'd and sunder'd.
Then they rode back, but not
Not the six hundred.