Fortifications of the Isle of Wight - Yaverland Battery Content from the guide to life, the universe and everything 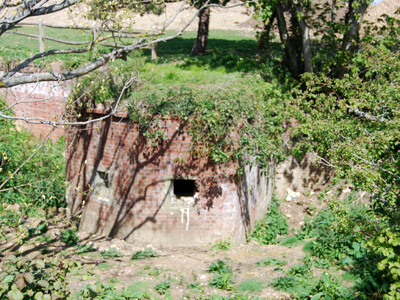 Yaverland Battery was the largest battery built to defend Sandown Bay. It was also the battery with the longest operational life, remaining in use for almost 100 years, right until the end of coastal defence.

Yaverland Battery was built between Sandown Granite Fort, which was 1,800 yards west of the battery, and 1,000 yards west of Redcliff Battery. It was built about 108 feet above sea level, but the cliff was less steep than elsewhere and could be climbed by an attacking enemy. Unlike the other batteries of Sandown Bay, Sandown Barrack Battery and Redcliff Battery, it had defences constructed to protect it from infantry attack on both the cliff side and the rear. The original design for Yaverland Battery was for an eight-gun battery, constructed between 1861 and 1864.

The Hampshire Telegraph1 in 1862 described the fort:

'The next supporting work to the new [Sandown Granite] Fort is Yaverland, occupying a commanding position on the cliffs eastward. It is an earthwork, having a front at an obtuse angle mounting six guns firing through embrasures and two guns on cavalier bastions. Its support to the chief work, the stone-fronted fort in the hollow below, is of a similar nature to that afforded by the Barrack Battery to the westward, commanding the sea to the front and sweeping the line of beach on the front and left flank of the fort. Its gorge is closed by a building for officers' and men's quarters on the left, and a high loopholed wall on the right connected by the entrance gateway which crosses a deep and wide ditch the cuttings of which, as at the Barrack Battery and Redcliff, end on the cliff overhanging the sea beach.'

Essentially the battery was almost triangular in nature, with the widest side to the south. This wide, south face was protected by a ditch and two infantry caponiers near the corners to provide covering fire should an enemy enter the ditch, with a thick brick carnot wall between these caponiers. This was a wall below the gun ramparts were defended by rifle loopholes. The narrow rear of the fort was also protected by two caponiers, and was the location of the store and the barracks accommodation for the 2 officers and 57 men who were stationed here. Entry to the barracks was via a drawbridge over the ditch near the north-east corner of the fort, with the winch-house positioned next to the drawbridge. The parade ground itself had two bombproof magazines in the middle and two cartridge stores close to the guns.

Yaverland Battery was built under the direction of Captain William Crossman, Royal Engineers. During the construction of the battery, in the winter of 1863, like at Redcliff part of the cliff near the battery gave way and eroded into the sea. This was not a major threat to the integrity of the fort, but still was considered important enough to warrant that the cliff face and the ditch's counterscarp were drained and a revetment sea wall, known locally as 'Denett's Wall', was constructed2. These modifications and the fort itself were completed by 1864, when the battery was considered to be 'well and skilfully constructed', with £20,500 spent on it.

Although originally intended to be armed with eight 64-pounders, instead eight 7-inch RBL Armstrong guns were used, until 1872 when the 64-pounders finally arrived. In 1876 the easternmost 64-pounder was removed and replaced with a traverse, or earth ramp, to protect the battery from incoming fire from the direction of Culver Cliff. To help in this defence a large parados (a defensive earth bank) was built east of the battery to absorb any incoming shells. It was originally proposed that the removed 64-pounder, along with a 64-pounder removed from Redcliff Battery in 1876, could form a new battery at the end of Culver Cliff to defend this area from attack; however the battery at Culver was not constructed at this time.

By 1899 the 64-pounder, with its slow rate of fire, was considered obsolete. It was proposed to replace the remaining seven 64-pounder guns with two 9.2-inch breech-loading guns – weapons with a range of over 10 miles – and three 6-inch breech-loading Mark VII guns. Although the original embrasures were demolished and emplacements for the three 6-inch BL guns constructed between 1900-1902, the 9.2-inch guns were never fitted. It was considered that the 6-inch guns would be more than adequate to defeat cruisers and destroyers escorting landing barges. The Mark VII 6-inch guns were the standard coast defence guns at the time, designed by Vickers, Sons & Maxim3, and could fire a 100 pound shell through 15 inches of armoured plate at 1,000 yards. It was an effective weapon introduced in the first decade of the 20th Century – many stayed in service until coast defence was abolished in 1956.

The east magazine was demolished (although the west magazine was retained), and beneath the gun emplacements were shell and cartridge stores, a Royal Artillery store and a shelter. The original caponiers and carnot walls were retained, but were considered to be of less importance. One of the caponiers was simply used as a paint store. The land in front of the new emplacements was rescarped to form a lower profile, so as to help the guns blend in better with the landscape. The guns were also positioned at an angle across the bay to prevent them from being flanked by enemy vessel moored off Culver. They also gained the role of being weapons used in an examination anchorage, where suspect vessels would be searched under threat of destruction. All of this new work was constructed in reinforced concrete, with brick only used on the inside of internal walls in magazines, to reduce the risk of condensation and damp. These guns were assisted at night by searchlights positioned east of the battery and one in Sandown Granite Fort.

By 1901 a block of four new married quarters had been constructed outside the battery. In 1913 the barrack block accommodated 47 NCOs and men and had a kitchen and two dining rooms, one for the men, one for the NCOs, a schoolroom and recreation and reading room. The 1905 Owen Committee on the Armaments of Home Ports concluded that Sandown Bay was over-gunned, and that Yaverland Battery only needed two, and not three, 6-inch guns. As a result of this, in 1910 one of the guns was placed on the reserve list and in 1913 one was loaned to the 8th Battalion Hampshire Regiment.

By 1914, the gun loaned to Hampshire was returned and the fort had two active guns. The reserve, however, was removed in 1915 and sent to Inchkeith Island in the Firth of Forth. The searchlight east of the battery, close to the cliff edge, was replaced by an Electric Light Defence command post on top of the barrack block. Also in 1914 a new officer's block was constructed on the parade ground between the guns and the barrack block, and two gun crew shelters and a Battery Command Post were constructed on top of the former magazine. In addition a position finding cell was built: this was a small building that housed range and direction finding instruments to help pinpoint targets for the guns, with supporting cells constructed along the coast at Redcliff and near the Barracks Battery. The battery was also armed with two machine guns and surrounded by a barbed-wire fence.

After the Great War the battery returned to a peaceful existence, punctured only by Territorial Army summer camps and hosting King's Cup shoots. Two 90cm searchlights and their supporting engine room were installed in concrete emplacements near the cliff edge, as well as two practice emplacements for 12-pounder guns. A lattice tower topped by an observation post was also built. However, in 1924 the battery was disarmed, and the searchlights remained the only weapons that Yaverland Battery had during the initial stages of the Second World War. Yaverland worked in conjunction with Culver Battery until July 1942, when the search lights were switched off.

In 1940 surplus old naval 6-pounder guns adapted for beach defence were mounted in Yaverland, in addition to ones in Bembridge Point, near Sandown library and later, in 1941, in Shanklin. In addition a mobile 6-pounder gun was stored in Yaverland, able to be taken where needed in case of invasion. In 1943, when the threat of invasion had all-but ended, Yaverland Battery was re-armed, with two 6-inch BL Mark VII guns returning to the battery. These were used by 441 Coast Battery RA (Home Guard) to protect Sandown Bay. A French 75mm gun was also installed for landward defence, with men from the 20th (Nunwell) Battalion HG and a small detachment of Regular soldiers.

In 1951 two 3.7-inch AA guns used for coast artillery practice. These were only mounted for four years before coast artillery was abolished in 1956. The guns and searchlights were removed and Yaverland Battery was sold off. Despite this, near the battery an underground Royal Observation Corps post was constructed during the Cold War in 1962. Due to its coastal location at Sandown Bay, the Isle of Wight's central tourist destination, the battery quickly became a holiday camp, Sandown Bay Holiday Centre.

As a holiday camp, the primitive barracks accommodation were not up to the standard expected in a tourist resort, and so the barrack block was demolished, as was the glacis defending the gun emplacements. Much of the rest of the battery was allowed to become overgrown and buried. However in recent years the Sandown Bay Holiday Centre has changed hands, and been renamed to Riviera Park. The new owners seem delighted that their holiday camp has unusual heritage attached, and boast 'Historical fort, gun emplacements' as one of their site's features. They appear keen to preserve and display the remains to their best advantage. The front carnot wall and caponiers have been cleared of debris and are now clearly visible from the Isle of Wight Coastal Path, on footpath SS434. The married quarters, part of the west wall, and the pump house, bread store and drawbridge winch house also still exist. Now a Scheduled Ancient Monument, the battery is located just within the border of the Isle of Wight's Area of Outstanding Natural Beauty.

1A newspaper founded in 1799. It was taken over by the owners of The Portsmouth Evening News in the closing years of the 19th Century and no longer is in publication. The Portsmouth Evening News has since been renamed The News and still publishes papers today.2After the sea-wall was constructed, no money was spent on its upkeep and so the wall was gradually eroded and undercut by the sea and now lies on the seashore, some distance from the cliff.3Vickers was an engineering company founded in 1828. In 1897 they took over The Maxim Nordenfelt Guns and Ammunition Company, becoming Vickers, Sons & Maxim. They later in 1927 merged with Armstrong Whitworth, the company behind the Armstrong breech-loading gun to become, Vickers-Armstrong Ltd and in 1928 purchased Supermarine aircraft, famous for the Schneider Cup aircraft and the Spitfire as well as the Viscount airliner. Vickers was nationalised in 1960 to become British Aerospace and is now part of BAE Systems.4The Isle of Wight also boasts a unique footpath classification system. Every footpath and bridleway on the Island has its own number relating to the parish in which it is located. SS footpaths are located within the parish of Sandown & Shanklin.