Fortifications of the Isle of Wight - Fort Albert Content from the guide to life, the universe and everything 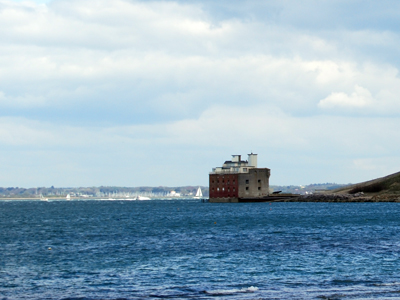 Fort Albert, also known as Cliff End Fort, is a unique fort to the Isle of Wight. The second of the Victorian fortifications on the Isle of Wight, Fort Albert is the type of fort known as a 'brick battleship', where the guns were arranged in a similar layout to inside a man-o'-war warship. This was similar to forts that were designed and built in America at the time, in the run up to the American Civil War.

What became Fort Albert originally envisaged in 1852 as a semi-circular 41 gun fort on Warden Ledge. This idea was abandoned due to cost and the unstable ground at Warden Ledge. Instead, the smaller Fort Albert was built at the other end of Colwell Bay, in a strategic position able to defend the narrow gap between the Isle of Wight and Hurst Castle on the mainland.

Fort Albert was begun in 1853, completed in 1856, and declared obsolete by the Royal Commission on the Defences of the United Kingdom in 1859, having effectively been replaced by Cliff End Battery on the cliff above. Although the tall, brick structure would have withstood an attack by old wooden warships armed with cannons firing cannonballs, as an anti-ironclad defence it was obsolete. Like the American forts it resembled, it would have been extremely vulnerable to rifled artillery.

The original plans suggested 41 guns, but finance and the small amount of firm ground available reduced this to 29 guns in four tiers. The fort was J shaped, with the shaft of the J facing north and the smaller tail facing northeast and inland towards the Island. Access was up a flight of steps from the cliff top, over a drawbridge and up further steps to reach a first floor door. The fort was also defended from attack by the sea, which at high tide completely surrounded its base. Rifle holes and embrasures where guns could be positioned also defended the fort from any infantry who might have invaded the Island. The fort had a detached guard house built at the top of the cliff to defend Fort Albert from an enemy on the cliffs in 1854, as well as an earthwork defended by a caponier palisade, ditch and eleven guns constructed in 1858.

The fort was originally armed with seven 68-pounder guns on the ground floor, seven 8-inch smooth bore guns and six 32-pounder guns on both the first and second floors, as well as two 8-inch howitzers armed with shrapnel on the roof. The howitzers would be used to defend the neighbouring beaches from infantry attack. A loopholed gallery where riflemen could defend the fort also protected the roof.

It had been originally planned for the fort's stores and magazine to be kept in the basement; however this began to flood soon after the fort's construction. In addition, it was feared that firing the powerful 68 pounders could damage the walls through the concussion, and so by 1861 they were replaced with seven 7-inch Armstrong rifled breechloaders. In 1859 it was decided to replace the fort with a battery built on the cliff above, despite the time and effort required to stabilise the cliff from erosion. In 1872 all the 8-inch guns and 32-pounders were removed. By 1877 Cliff End Battery was completed, and so Fort Albert became primarily used as an infantry barracks for the battery above. The no longer necessary and outdated 7-inch Armstrong guns and 8-inch howitzers were removed in 1887.

Between 1886-8 Fort Albert was converted into a Brennan torpedo launching station by the Royal Engineers. The Brennan torpedo, a top-secret weapon, was one of the world's first guided missiles. Invented in 1874 by Australian Louis Brennan, the Brennan was a 24 foot long guided torpedo. A steam engine at Fort Albert would wind wires attached to two drums in the torpedo, with the drums turning two propellers. Winding the drums at different speeds activated the rudder, and thus an operator at Fort Albert could control both the direction and speed, up to a maximum of around 30mph. Although the torpedo had an effective range of less than 2 miles, the narrow gap between Fort Albert and Hurst Castle meant this was considered plenty. Brennan Torpedo positions were also installed at Cliffe Fort in the Thames Estuary, as well as in Plymouth and Cork.

By the 1880s fort design had changed to hidden, concealed batteries made using solid concrete and earthworks, rather than conspicuous and obtrusive vulnerable brick forts like Fort Albert. Fort Albert was thus not the ideal building to house of a top-secret weapon, but it was in the right strategic location. For the conversion, a torpedo-launching ramp was built at the fort's north side, covered by a wooden roof. Behind the ramp was a two-storey concrete torpedo storage room, complete with boiler and engine rooms. There were also fresh and salt-water tanks. As the brick fort was known to be extremely vulnerable to rifled gunfire from enemy ships, almost 70% of the fort was filled to the roof with sand, and the flooded basement filled with shingle, in an attempt to make it able to withstand an attack. The remainder of the fort was used as a storeroom and some accommodation. An old pier on the fort's north was used to land torpedoes.

In the late 1890s a new engine room and boiler room were built, and a new pier constructed on the fort's south side in 1903. There were plans to construct a second launching ramp and engine room to double the offensive capacity of the fort, yet this was abandoned when it was concluded that the Brennan torpedo's usefulness against battleships was too limited by its speed and range, and the manufacture of Brennan torpedoes came to an end. The Brennan torpedo was decommissioned as a weapon in 1905.

Later History Of The Fort

As the fort was in a strategic location, three 3-pounder quick firing guns were installed in 1892, followed by three 6-pounders between 1896 and 1902. In 1907 the roof held two searchlight emplacements and in 1909 Fort Albert replaced Freshwater Redoubt as the Island's practice battery. The two 12-pounders from Freshwater Redoubt were also installed at his time, with two more added in 1910. Although these first 12-pounders were removed in 1915-6 during the Great War, the fort had two rooftop 12-pounders again between 1925-41.

During the Second World War, almost a hundred years after the fort was first constructed, it was again modified for use in war. In February 1941 two twin 6-pounder towers were built on Fort Albert's roof, with the casemates below the guns cleared of sand and used as magazines for these 'twin-six' guns. In 1942 a new searchlight emplacement was constructed projecting from the south of the top floor, and another searchlight was installed in the casemate next to the southernmost casemate on the first floor. Also in 1942, a Bofors 40mm Anti Aircraft gun was installed on the cliff outside the fort.

In 1947, as a test, the 'twin-six' guns were adapted to be able to elevate to 80°, for use as dual-purpose coastal artillery and anti aircraft guns. This idea was short lived and the trial ended in 1948. In 1957 the fort's guns and searchlights were sold off and scrapped, and the fort was converted into a block of eight luxury flats. Though visible from nearby Colwell Bay, the fort is not open to the public. Due to unstable blue slipper clay the fort is unsafe to approach except via the road, which is private property. It is, however, the only Grade II* Listed fortification on the Isle of Wight.