The 1981 US Air Traffic Controllers Strike Content from the guide to life, the universe and everything 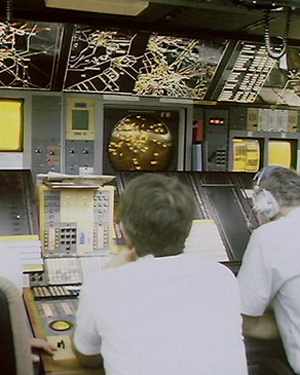 I have been briefed by members of my staff as to the deplorable state of our nation's air traffic control system. They have told me that too few people working unreasonable hours with obsolete equipment has placed the nation's air travelers in unwarranted danger. In an area so clearly related to public safety the Carter administration has failed to act responsibly.

You can rest assured that if I am elected President, I will take whatever steps are necessary to provide our air traffic controllers with the most modern equipment available and to adjust staff levels and work days so that they are commensurate with achieving a maximum degree of public safety....

I pledge to you that my administration will work very closely with you to bring about a spirit of cooperation between the President and the air traffic controllers.

There is general agreement that air traffic controllers have one of the most stressful jobs on the planet.

According to the National Air Traffic Controllers Association, a successor organisation to PATCO, in the year 2005 there were about 5,000 aircraft in the skies over the United States at any given time, with over 87,000 flights per day. This includes not only commercial flights, which comprise only about 35 percent of that number, but private planes, air taxi flights, military flights and air cargo flights.

The most simplistic description of an air traffic controller's job would be something along the lines of 'make sure that no two of these planes bump into each other'. A single error can cause hundreds of deaths. The core of the job is to ensure that aircraft maintain adequate separation from each other; in the air, while taking off and landing, and on the runways. They must communicate concisely and clearly, listen carefully to every word spoken to them by aircraft personnel and stay calm under intense pressure. With very few exceptions, the maximum age at which one can start training as an air traffic controller with the United States Federal Aviation Administration (FAA) is 30 and retirement is mandatory at age 56. Each air traffic controller bears responsibility for about 10,000 lives each day he or she is on the job.

The following year, the United States Civil Service Commission ruled that PATCO was a trade union, not a simple professional organisation.

On 25 March, 1970, over 2,000 PATCO members, unhappy with the fact that they felt that too few controllers were responsible for too many flights while using obsolete equipment, called in sick. A federal law prohibited strikes by government unions. After a few days of major air traffic delays, the federal courts ordered the controllers back onto the job. The action was not a total failure by any means. After the workers returned to their jobs, the United States Congress sped up the installation of more automated air traffic control systems, started hiring and training more air traffic controllers and raised salaries.

In February of 1981, PATCO and the FAA entered into contract negotiations. PATCO was requesting a wage increase of $10,000 per year for all air traffic controllers, whose salary range at that time was from $20,462 to $49,299, the reduction of the 40 hour week to a 32 hour week and full retirement after 20 years of employment. The FAA took the position that, as a branch of the federal government, it simply did not have the resources to meet these demands while continuing costly equipment upgrades then in progress. The counter-offer included a shorter work week and a ten percent pay increase for air traffic controllers working the night shift or doubling as instructors. Additional negotiation added more concessions, but a full 95 percent of PATCO's membership voted to reject the final settlement offer.

On 3 August, 1981, after failing to reach any settlement with the FAA, PATCO employees went on strike, with about 13,000 of the 17,500 PATCO members walking off the job. This strike was in direct contravention of a federal law that specifically banned strikes by government unions and a no-strike clause in each of their individual employment contracts. That same day, then-president Ronald Reagan called the strike a 'peril to national safety' and warned strikers that they were in violation of the law and that their employment would be terminated if they did not return to work within 48 hours.

Quoting former United States President Calvin Coolidge, President Reagan stated that, 'There is no right to strike against the public safety by anybody, anywhere, any time.'

President Reagan assumed his authority to act in this manner from two federal laws; the Taft-Hartley Act of 1947, which includes a clause allowing the federal government to obtain injunctions to break a pending or existing strike if that strike imperils the national health or safety and the 1955 law that made strikes by government employees a crime punishable by a fine or up to one year in prison. A mere ten percent, about 1,300, of the striking workers, returned to work within the allotted two days.

Those who did not return to work may have assumed that President Reagan's threat was a bluff, given the precedent of 22 other unauthorised strikes that had occurred in the previous years by postal workers, Library of Congress employees Government Printing Office employees.

The impact of this particular strike had the potential to be enormous. Major airlines were looking at losses of $30 million per day during the strike. Airlines employed 340,000 people who would have no work if there was no air traffic. Fresh flower, fruit and fish markets all relied on air transportation to get goods to market nationwide. Human blood for transfusions had to get where it was going quickly. The only industries that seemed not to view this strike as a disaster were those offering other forms of transportation: bus lines, Amtrak rail service and car rental companies.

During those 48 hours, the United States Secretary of Transportation implemented contingency plans to keep at least some air traffic moving. Flights were prioritised. Methods of air traffic management that PATCO had unsuccessfully requested in the past were implemented. Approximately 3,000 supervisors and 900 military controllers joined the non-striking workers. The people working as air traffic controllers were ready to work 60-hour work weeks. About half of the normally scheduled flights were able to take to the air.

Death of a Union

On 5 August, 1981, the 11,345 remaining striking air traffic controllers were fired and banned from any future federal employment for life. Lane Kirkland, president of the AFL-CIO called Reagan's action 'brutal overkill'. The International Federation of Air Traffic Controllers contemplated a boycott of United States air traffic in support of PATCO, but, with the exception of a two-day boycott by Canadian and Portuguese controllers, no action was taken.

The firing of striking workers and replacing them with supervisors and strikebreakers was by no means a new idea. This was a tactic often used in many industries. Typically, the new contract negotiated included a 'return to work agreement', in which the striking workers were re-hired with full seniority and, sometimes, with back pay.

PATCO leaders were jailed for ignoring the court injunction prohibiting the strike. The United States Justice Department issued indictments against 75 controllers. Fines totaling $1 million per day were levied against the union. The union's strike fund, consisting of over $3 million, was frozen. On 22 October, 1981, the Federal Labor Relations Authority decertified PATCO. The union no longer existed.

In 1993, then-president Bill Clinton reversed the ban on hiring PATCO members who had participated in the strike. This had little impact and, as of 3 August, 2006, only 846 of the more than 11,000 air traffic controllers who had been fired returned to work in that profession.

Joseph A McCartin, of the history department at Georgetown University, has called the failed PATCO strike 'the most significant event in accelerating the decline of organised labor in the United States in the late 20th century.' In a paper published online on 2 November, 2006, Mr McCartin argues that the PATCO strike legitimised the tactic of permanently firing striking workers within the private sector as well as within the public sector.

Air traffic controllers in the United States are now represented by two unions: the National Air Traffic Controllers Association, which represents air traffic controllers and engineers and architects working in the aviation field; and the Professional Air Traffic Controllers Organization, which has professional contract tower controllers that work in the private sector as members and is under the umbrella organisation the American Federation of State County and Municipal Employees (AFSCME). Neither of these organisations is related to the original PATCO.