Rail Travel in the USA Content from the guide to life, the universe and everything 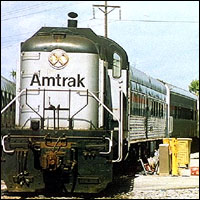 Rail travel in the USA has many advantages over other forms of transport. This entry considers the benefits of travelling by long-distance train compared to going by bus, car or plane.

Almost all long-distance passenger trains in the United States are operated by Amtrak, set up by the Federal government in 1971 to rescue failing private railroads. Today's trains still have historic names such as the Sunset Limited, Texas Eagle and California Zephyr, and serve more than 500 destinations, many of which have no alternative air service or intercity buses. Big cities such as Chicago, Houston, Denver and Seattle have their own suburban and commuter services, operating independently or in association with Amtrak.

Trains allow you to travel in safety and comfort, and their rugged charm sets them apart from more mundane means of transport. They pollute less, rarely suffer from weather delays and won't give you jet lag. You can talk to your companions, read a book, or have a snooze. If the scenery palls you might go for a stroll, have a meal in the dining car, make friends in the bar or watch a movie. Trains can also be an inexpensive way see America, especially if you use a rail pass. These can cover one particular region or the whole Amtrak network; the North America rail pass gives unlimited travel on VIA Rail trains in Canada as well as on all Amtrak routes. Students and 'seniors' (people over 62) receive additional discounts.

Some people are afraid of air travel, or have a medical condition which would make it unsafe, and train travel is more convenient (or feasible) than driving. It may also be a novelty, especially for families with children, who are usually fascinated by trains. It's often easier to care for small children on a train than on a plane or car trip. Some people go by train solely for the amazing views en route or relish the extra time it takes, giving them an interval alone on either side of a vacation, family visit, or business trip. Rumour has it that some go by train just so they that can say they have had sex on board!

Travelling overnight is a good way to save money on hotels. Generous reclining seats, dimmed lights and a free pillow from the attendant make it easy to sleep comfortably even in coach class - something that is almost impossible on a Greyhound bus. The gentle rocking and steady rhythm of the wheels are usually enough to lull you to sleep. It's a good idea to take a blanket or coat in case the air-conditioning becomes over-enthusiastic, and choose a seat in the middle of the car away from the doors.

Alternatively, there are ingenious sleeping compartments, ranging from singles up to family size. These are not cheap, and need to be booked well in advance, but you do get extra privacy and facilities (sometimes even including a shower!) plus the unique pleasure of hurtling through the night in your personal travelling capsule. You can either make up the bed yourself from its daytime seating arrangement or have the attendant do it for you. Towels, soap and bed linen are provided, as well as complimentary tea, coffee or fruit juice and a newspaper in the morning. The fare includes all meals in the dining car.

This isn't the fastest way to travel (except for 150 mph Acela trains between Boston, New York and Washington DC) and you usually need to buy your ticket in advance. Timekeeping can't always be relied on, since most trains operate over tracks owned by freight railroads and don't always have priority. Some trains only run once a day and they may not stop where you want to go, although 'thruway' buses are usually scheduled to allow you to continue your journey.

Long-distance trains frequently go through wilderness areas with spectacular scenery that is not easily or safely accessible by any other means. You can travel to many of the Great National Parks in the west, which have grand lodges built 100 years ago by railroads such as the Union Pacific.

More comfortable than the bus, more fun than flying and more relaxing than a car trip, trains keep you in touch with the landscape and the civilised pace (averaging 70 mph) is ideal for sightseeing. Planes may be quicker for distances over 1,000 miles (1,600km) but involve lengthy security checks as well as tedious journeys to and from congested airports. More information about trains in the USA and Canada can be found on the USA by Rail website.