'Downeast', Maine, USA Content from the guide to life, the universe and everything 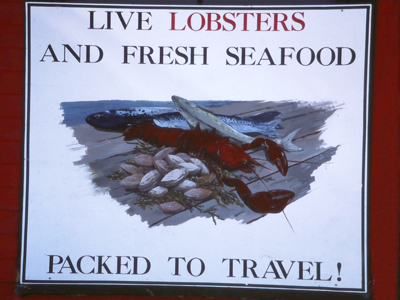 The vast country called the United States of America is simply overflowing with various peoples, beliefs, cultures, and subcultures. From the 'Confederate Southerner' to the 'Maine Yankee', the variety of life distinctive to the United States makes it a very interesting nation to explore. In short, it's the lumps in the 'melting pot' that make the national stew a tasty one.

The 'Downeast' portion of the State of Maine is located on the Atlantic coast, at the prominent bulge on the State's eastern edge. To travel to the Downeast region, it is helpful to keep a few guidelines in mind when dealing with the native population.

The relative isolation of this backwater of the bustling Northeast has given the region a reputation for an almost xenophobic distrust of visitors from 'away'; however, the expansion of tourism into Maine's north, and its cratered roads less travelled by, has debunked the myth of a sullen hinterland populated by inbred cannibals... to a large extent. Weekenders from Boston are now fairly comfortable with the idea of venturing north along old Route 1, the coastal route to Canada, beyond the familiar haven of rocky Bar Harbor.

In Maine, as elsewhere, only the most obnoxious tourist chooses to stand out as such; the key to getting the most out of a visit to a strange place is by winning some measure of acceptance as an actual person and not an imbecile in a loud shirt with more money than sense.

Dressing and acting like a typical tourist is showing a sign of weakness, which may put you at a disadvantage when dealing with the locals. The people of Downeast Maine will be quite friendly to you, especially if they expect that they (or close family) will in some way profit from your abuse of the expensive (but often poor quality) roadway system in the rural parts of Downeast Maine. However, as families are highly extended, and geneology such a highly-practised hobby, it will not be difficult to act as though some family member of anyone you meet, will profit from your presence. Be that as it may, it is best for the traveller to minimize the appearance of being a tourist.

Do not wear hats, t-shirts, or other memorabilia showing the name of the state of Maine, unless said apparel looks heavily used and slightly abused. Locals do wear such things, but invariably, they must be worn almost threadbare. However, the purchase of such things is encouraged, when you are confronted with them, as this adds to the appearance that someone local is making money from your presence.

Be aware that moose have the right of way on Maine roads (this is especially true of Maine roads that aren't main roads), just as they do in neighbouring New Brunswick, Canada, and basically anywhere that moose are wont to come out of the woods. A moose collision at 45mph will destroy your new 'sports utility' and will probably result in serious injury (or worse) to its occupants. Warning whistles that attach to your vehicle are common at any auto parts store in the region, to help minimize the chance of an accident.

The drivers of Maine tend to exceed speed limits by approximately ten miles per hour, though in Downeast Maine, this is an exceptionally dangerous practice, with twisting roads and regular speed traps1... and moose, of course.

Route 9, from Bangor to Calais, is perpetually under construction, and speed traps abound. The more scenic Route 1, along the coast, has fewer speed traps, but takes a great deal more time to traverse, and is littered with tourist traps instead.

Do not attempt to speed on route 190 to Eastport from Perry, especially at the 35mph zone passing through Sipayik, which is also known as the Pleasant Point Reservation. Set your cruise control for 35 or 34. This small Indian reservation town, is the most notorious speedtrap location in the state. The sign warning 'Strictly Enforced' means it.

The natives of the State of Maine do not, as a rule, use turn signals. Only use your own if you are not attempting full-blown undercover tourism, keeping in mind that license plates from States other than Maine will give instant opinions of yourself and your family, to the natives.

In Downeast Maine, it may be surprising that many 'ethnic' restaurants, not commonly associated with the region, do provide excellent, if expensive, fare. Chinese and Mexican restaurants do exist, and are operated by surprisingly skilled families. However, the mainstay of tourists in Downeast Maine, is the green-shelled crustacean known as lobster. The locals can rarely afford lobster and many long-time residents grew weary of it long before it became a passion for tourists.

Lobster is the hallmark food of Downeast Maine, challenged only by fish chowder and steamed clams. A lobster only attains the trademark red colouration after boiling; it is naturally a greenish brown. Purchasing lobster is a task best performed near a wharf or pier, or off the back of the many trucks advertising fresh seafood, which can be seen at many major interchanges. The prices are fair, and, almost universally, the lobster and other seafood is higher quality than that found in grocery chains. Usually the food is merely a day of age, often kept alive in saltwater tanks. A common sight along the coast of Maine is the colourful buoys marking the location of lobster traps in the cold Atlantic.

Our thanks to Tav's Dad for the main photograph.

1Speed traps are places where police cars hide, waiting for unsuspecting motorists, and, unlike lobster traps, seldom lure travellers with free food or pose the risk of eventually being boiled alive and eaten.