How to Cook Lobsters Content from the guide to life, the universe and everything 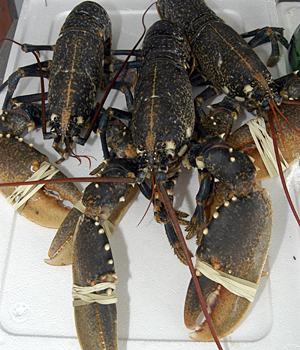 Sometimes when passing the shellfish counter you may stop and admire the suave way in which other folk1 ask the fishmonger for lobsters. Are you tempted to buy or - like many British people - unsure of what to ask for and of what to do with these curious, incredible looking delecacies once you have taken them home? Lobsters are quite expensive to buy in Britain and thought of as something of a luxury. You certainly wouldn't buy one on a whim without knowing exactly what to do with it!

Lobsters - What Are They?

A lobster is basically just a very, very large shrimp. Shrimps, prawns, crayfish and lobsters all belong to the same group of animals, called crustaceans. Unlike vertebrates, such as mammals, fish, reptiles and birds and amphibians, lobsters do not have a backbone - they are 'invertebrates'. Also, they do not have a skeleton like the higher orders of animals - they keep their body shape by having a hard external shell - the exoskeleton. This means you'll benefit from a little understanding about lobsters to find the good bits to eat.

Choosing and Buying Your Lobster

First you have to buy the lobster. Fishmongers commonly offer raw (uncooked) lobsters for sale. Expect them to be alive, with their claws restrained by heavy duty elastic bands. They will not be the lobster-red colour that you might expect. This is because the colour of a crustacean's blood is different to that of vertebrates. Lobsters absorb oxygen using haemocyanin instead of haemoglobin, and this is blue. The lobster turns red when thoroughly cooked.

Some establishments offer live lobsters from a tank, from which you choose for yourself. In a tank, the lobster will likely have been kept alive for a longer period of time, far longer than the freshly caught ones available from the fish counter. Beware - for unless you are pretty sure there is a speedy turnaround in sales from the tank you may find that the meat in the lobster claws has begun to atrophy because they have been clamped by the rubber band for too long.

A lobster weighing between one and a half and two pounds should feed two persons. Generally, British supermarkets stock lobsters of about this average size.

Fishermen catch lobsters in many places around the world, and often export them. You may very well find ready-cooked and frozen lobsters for sale. Pre-prepared lobster sports a scarlet shell colour and should be stored in exactly the same way as frozen shell-on prawns. They have a very short shelf-life once thawed. It may also be possible to buy raw, frozen lobsters.

Once you have taken your fresh lobsters home you should waste no time in cooking them. Don't buy them ahead of time - they should be cooked on the day of purchase. Should you want them for a special meal (such as Christmas or New Year) when it is impossible to buy them on the day itself, then plan your menu so that you can cook the lobster to serve cold or in a recipe such as lobster bisque.

One of the major reasons that people shy away from cooking lobsters is that they are usually cooked while still alive. This is not necessary, but because you should buy live lobsters2 you will have to despatch your lobster in a humane manner before cooking them. Experts recommend you do this by placing the lobster in the deep freeze for a short period of time3. By placing them in the freezer, you will send the lobster into hibernation - a sort of coma - and this torporific state provides the easiest way to deal with this situation. You should only chill the lobster through this process, not freeze it, as this may affect the cooking times. You should return lobsters still moving after this to the freezer for a few minutes longer.

Obtain a very large saucepan, preferably a stock pot with a tight fitting lid. Bring plenty of water to the boil, both in the pot and some additional water in a kettle. Once the water reaches a full rolling boil, add salt, the juice from a lemon and a bay leaf. Next add the lobsters - head first so as to quicken the moment of death. Make sure the water completely covers the lobsters. Use additional boiling water from the kettle if needed. Replace the lid and boil for 15 minutes. You should leave the bands around the claws while cooking.

Using the same size of large saucepan or stockpot as for boiling, with either a trivet at the bottom or a steaming basket, fill with a couple of inches of salted water and bring to the boil. The lobsters in this case should not be touching the boiling water. To steam a lobster, you absolutely must use a pot with a very tight-fitting lid, and you should cook them for 18 minutes.

You may definitely want to stun the lobster by placing it in the deep freeze for a while before tackling this method. Alternatively, make sure you have a first aid kit and know where it is!

First of all, you remove the lobster's two front claws. Remove the restraining bands and crack the claws' shell open with either a pair of nutcrackers or the back of a heavy knife.

Then, using a sharp, heavy knife - insert the point into the lobster behind its head5, then bring it sharply down to the cutting board, and then continue the movement forward and down until you cut the head part in two. Turn the lobster around and repeat the cutting through the body and the tail section. Remove the green inner parts, the digestive organs and the liver. Any reddish parts seen can be left, as they will be the edible roe (if the lobster had been female). The white parts in the body cavity are the meat.

Place the lobster halves and claws under a very hot grill or over a hot barbecue. Turn after three or four minutes, using melted butter to baste the flesh. The halves of the lobster shell make a very good container for barbecuing the lobster and can be filled with garlic and herb butter.

How to Tackle a Cooked Lobster

Once you have successfully managed to cook lobster you are faced with the problem of getting them open.

Using nutcrackers (or special shellfish crackers if you have them) crack open the claws and pull out any white meat - this is the especially delicious part of the animal. If the lobster has been boiled or steamed you should pull off all the small legs from under the body and the tail flaps from the end. Then, using a sharp knife, insert it under the carapace (the back shell of the lobster) and lift the shell away from the meat. You will find that you can pull the meat from inside the tail, by pushing your finger into the shell from the end where you have removed the flaps. Any greenish coloured contents should be discarded, as above. The red roe, if found, is regarded as a delicacy by some.

A further guide to consuming these much-desired crustaceans can be found in the Entry How to Eat a Lobster.

Enjoy your fresh lobster served with melted butter, a salad and some crusty bread. A white wine, such as Riesling or a Chablis, would make a good accompaniment.

There are many ways to cook and serve lobsters, often removing the flesh from the shell, before cooking. Classic recipes for lobsters include Lobster Thermidor, Lobster Newburg and Lobster Bisque.

1Generally speaking these are often French, Italian and Spanish men, who seem to know their way around all things that are caught from the sea.2The same way you should buy oysters - given dead ones may carry bacteria that could give you food poisoning.3Depending on the size of the lobster and the temperature of the freezer, this chilling treatment may take between 15 and 20 minutes.4This is broiling in the USA.5This is another humane way of despatching the lobster and can also be used before boiling or steaming it.