The Respiratory System of Dinosaurs Content from the guide to life, the universe and everything 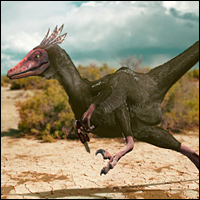 Fossil records show that dinosaurs, crocodilians1 and birds are all related, collectively forming a sub-class of animals known as Archosauria. Alligators and birds have recently been shown to have a type of breathing mechanism which may have been helpful to their common ancestors 200 million years ago, helping them to breathe effectively in the Triassic period.

Understanding the breathing mechanism of birds (because they have more similarities with dinosaurs, than do the crocodilians) may help to clarify how the respiratory system of dinosaurs is thought to have worked.

The Respiratory System Of Birds

The way birds take in oxygen is very different and much more efficient than our own run-of-the-mill respiratory system, because of the way that air is pushed through their lungs. Birds' lungs are small but they are accompanied by two sets of air sacs, a posterior and anterior set2. These sacs are so prevalent in the anatomy of birds that they extend into hollow openings in some long bones, called pneumatic foramina, and into the trachea3.

Air Sacs and How They Work

The bird's respiratory system allows air to move uni-directionally4 so that only fresh oxygen-rich air enters the lungs. The lungs of a bird do not themselves inflate. The air sacs are not filled with blood vessels, as are the lung tissues, but act in a way similar to bellows.

As the bird inhales, fresh air runs over the lungs - at the same time another channel takes fresh air directly to the posterior set of air sacs. When the bird exhales, the lungs receive a second boost of oxygen-rich air from these posterior sacs, whilst the depleted, carbon dioxide-containing air from the lungs is removed into the anterior air sacs. From there it is pushed into the trachea and finally removed from the bird's body.

This is an extremely efficient respiratory system because stale air does not have to be exhaled before the next breath5, and it helps keeps birds light whilst giving them that extra oxygen-rich boost needed for flight. In other words birds are getting twice as much oxygen-rich air per breath as would a mammalian lung.

The first scientists to combine anatomical and functional studies of birds as possible examples of the internal structures of dinosaurs were Patrick O'Connor (Ohio University) and Leon Claessens (Harvard University). O'Connor and Claessens studied dinosaur fossils from New York, Berkeley, Chicago, Pittsburgh, Washington DC, Berlin and London as well as a 67-million-year-old complete dinosaur fossil (Majungatholus atopus) O'Connor had discovered in Madagascar in 1996. These fossils were compared to 200 specimens of modern birds.

The result of their work was to demonstrate that the same pneumatic foramina (openings in the bones for air sacs), although not identical to that of birds, were nevertheless present and clearly recognisable in the dinosaur fossils. This provided good evidence that the respiratory system of dinosaurs was very similar to that of modern birds.

Work at Manchester University in the UK has shown that the respiratory system of theropod dinosaurs such as Velociraptor were similar to modern diving birds. The Manchester team led by Dr Jonathan Codd looked at the fossils of manirapturan dinosaurs and extinct birds such as Archaeopteryx and compared them to modern birds.

As well as air sacs as part of their respiratory system, birds also have small bones called uncinate processes6 that act as levers to move the sternum and ribs during breathing. There are three types of uncinate processes in modern birds: those in running birds tend to be short; in flying birds they are intermediate; and diving birds have the longest type, the kind found in the dinosaur fossil evidence.

In 1996 a complete dinosaur fossil named Areosteon riocoloradensis was found on the banks of the Rio Colorado in Argentina. This dinosaur find drew the attention of palaeontologists because the pneumatic foramina were clearly evident in the vertebrae, clavicles and hip bones. In life these hollow spaces would have been lined with soft tissue and would have formed part of the anterior and posterior sacs of the respiratory system. Areosteon has become an important fossil discovery because it shows the early evolution of the use of air sacs in a species that was otherwise unrelated to bird ancestry.

Palaeontologists have concluded that there are three possible reasons why a bird-like respiratory system evolved in dinosaurs:

The discovery that the respiratory system of dinosaurs closely resembled that of birds has added to the now-almost conclusive evidence that birds and dinosaurs are closely related. It has also dispelled the idea that dinosaurs were slow and sluggish, since this very efficient respiratory system would have made dinosaurs very active and able to chase down prey relatively quickly.

1Crocodilians include both crocodiles and alligators.2Posterior at the back, anterior at the front.3The windpipe.4As a one-way system.5As would happen in mammals for instance, where the lungs are inflated and deflated with each breath.6A type of bony projection from the ribs which acts as a brace. They are only found in birds and some dinosaurs fossils.