Mary Toft - The Woman Who Gave Birth to Rabbits Content from the guide to life, the universe and everything 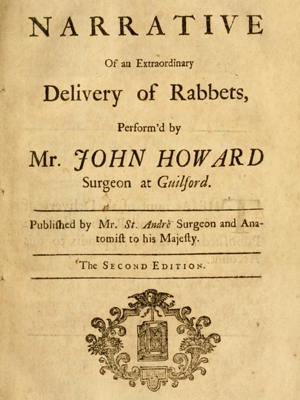 The less-than-blessed events, during which a 25-year-old married maidservant led society on a merry chase, led to controversy and amusement in London circles, to satirical engravings by artists such as William Hogarth, to Mary Toft's imprisonment for gross deception, and to embarrassment for certain members of the medical profession.

The incident also sheds light on some of the ideas about reproduction held in 18th-Century society, as well as the growing struggle between midwives and the male-dominated medical profession.

Being a representation of the frauds by which the Godliman woman carried on her pretended rabbit breeding, also of the simplicity of our Doctors by which they assisted to carry on that imposture, discovered their own skill and contributed to the mirth of His Majesty's liege subjects.
SA Seligman, 'Mary Toft - The Rabbit Breeder', from Medical History, vol 5, October 1961, pp 349-360.

In the spring of 1726, Mary Toft, an illiterate servant woman who lived in Godalming, Surrey, with her husband, a journeyman clothier, and three children, apparently had some strange experiences. When she was weeding in a field, she tried unsuccessfully to capture some rabbits running there. This made her crave rabbit stew, which seemed not unusual, as she was five weeks pregnant at the time, and prone to cravings. For many nights afterwards, she reported dreams of rabbits. In September, she gave birth to what appeared to be the organs of a pig, which were taken by her husband to the man-midwife in Guildford, John Howard, who attended her. She delivered several other pig parts, and then appeared to have recovered2.

A month later, however, Mary Toft began delivering rabbits at the rate of one a day, keeping Mr Howard very busy. News of this remarkable occurrence reached the outside world, and specialists were called in. The first was Nathaniel St Andre from Switzerland, a surgeon at the Westminster Hospital Dispensary, who brought along the Honourable Mr Molyneux, secretary to the Prince of Wales, to look into the matter. They arrived in time to observe the birth of the 15th rabbit, and by experimentally putting organs of the (dead) rabbit into water3, came to the conclusion that the birth was genuine.

The learned doctors discussed their findings with King George I, who dispatched his personal surgeon, Cyriacus Ahlers, to Guildford to investigate further. Mary produced more rabbits for him.

Another physician was called in, Sir Richard Manningham, a well-known and respected obstetrician. Manningham was more suspicious, particularly when Mary 'gave birth' to what appeared to be animal organs. Mary Toft was brought to London, where the deception was uncovered when a serving-man was found to have been smuggling rabbits into the hotel where she was staying.

Mary confessed to the hoax - she had simply been inserting rabbits (and parts of other animals) into a place in her anatomy where they ought not to have gone - and was imprisoned for imposture, but later released without being prosecuted. Many people continued to believe in the truth of the miraculous rabbit births, although educated society in general found the story hilarious, and the embarrassed doctors issued public apologies.

Poor Mary Toft in Ignorance was bred,
And ne'er betray'd a deep designing head,
Ne'er seemed cut out for plots; Yet never did wife,
Like her impose so grossly on Man Midwife...
From a broadsheet, 'The Doctors in Labour or a New Whim Wham From Guildford'

Part of the reason the Mary Toft case aroused so much discussion was the fact that, although babies had been traditionally delivered by female midwives, the burgeoning field of medical science, at this time exclusively a male domain, had recently begun to take over the area of obstetrics among the upper classes. Female midwives were now being disparaged by 'modern' thinkers as relics of a superstitious past4. The fact that she had fooled so many eminent doctors, some with royal patients, no less, put Mary Toft in the forefront of the debate, and squarely on the side of the traditionalists.

There may have been an element of class warfare involved here, too - people like Mary Toft (who was, after all, too poor to afford to buy rabbit meat for her stew) who usually relied on the services of the local midwife, probably viewed all this new-fangled science with some degree of suspicion. Mary was heard to provide some very unflattering descriptions of the learned physicians - she called Dr Ahlers, for example, a 'fumblefisted fellow as was never cut out to handle gentlewomen'.

We could ask why so many 18th-Century scientific men would have been ready to believe that a human could give birth to a rabbit. The answer lies in the strange belief - widely held even into the 19th Century - in the force of maternal impression. It was thought that pregnant women could influence their unborn children in utero if they underwent traumatic experiences5. It was also believed that maternal mood swings might cause mental illness and depression in their offspring. So who was to say that an unhealthy prenatal obsession with lagomorphs might not lead to the production of baby bunnies?

On the web: A short narrative of an extraordinary delivery of rabbits, 1727, by Nathaniel Saint-André.

1And, according to some accounts, a cat.2This was probably a real miscarriage.3Why this proved anything is not at all clear.4A thorough lampooning of the scientific approach to childbirth can be found in Laurence Sterne's novel The Life and Opinions of Tristram Shandy, Gent..5John Merrick, known as the 'Elephant Man', is said to have believed that his disease was caused by his mother's having been frightened by an elephant at a circus when she was carrying him.