John Creasey - Ten Authors in One Content from the guide to life, the universe and everything

John Creasey: Ten Authors in One | The First of Many | Simple Facts | The Toff
Gideon of the Yard (as JJ Marric) | Department Z | Dr Palfrey
Patrick Dawlish (as Gordon Ashe) | As Jeremy York | Inspector West
Michael Fane and Dr Cellini | The Baron 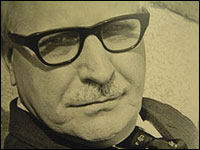 Everyone in the library and book world knows that John Creasey was a phenomenon; indeed, most of the world at large has long been aware of the fact that he wrote over 500 books. But the most remarkable thing is not simply that he wrote more books than anyone else alive (or dead, so far as the records show). Nor is it that the quality of his writing steadily improved to become so uniformly high; nor even that the power of his storytelling and the compulsive grip of his plots and themes seldom, if ever, slackened.

The outstanding fact is that John Creasey - one man - actually wrote as ten different authors - the personality of each vividly clear in the style and treatment of the greatly varied series and the characters who populate them.

Unless they were told, few readers would ever dream that the authentic, down-to-earth police procedural Gideon books were written by the author of the glamorous tales of the Toff. Style, attitudes, even the thinking behind these two series, seem not only different, but actually opposed. And neither of these characters remotely resembles Dr Palfrey, leader of a worldwide secret service, who, in book after book, does battle against the forces of evil. Palfrey lives in a world halfway between the stark realism of Gideon and the Toff's glamorous adventures; yet all three series convey a remarkable sense of social and political philosophy.

In yet another utterly different guise, John Creasey, in the later books written as Michael Halliday, created Dr Emmanuel Cellini. Cellini is an elderly, gentle psychiatrist who accepts the existence, in some people, of genetic evil, and believes that this evil can, in most cases, be dealt with by applied common sense.

There may be superficial similarities between the Toff and the Baron, but John Creasey created both Anthony Morton and the Baron to end George G Harrap's search for a 'new Raffles', that great EW Hornung character. Both the Baron and Morton take on distinct and challenging personalities of their own, even though the Baron occasionally shares the gaiety and light-heartedness so typical of the Toff, and both work in defiance of the police if the need is desperate.

So too does Patrick Dawlish, created by 'Gordon Ashe', in his early and middle period. During the war, Dawlish is a secret service agent with very a serious purpose, while soon after the war he becomes the Deputy Assistant Commissioner at Scotland Yard, in charge of the investigation of those crimes which cross international frontiers. As the leader of the Crime Haters, Dawlish has become a rare and outstanding character, and readers of the books about him know how remarkably his personality has matured. Today he commands respect not only of readers but of policemen the world over.

Roger West, the Chief Inspector turned Superintendent at Scotland Yard, was Creasey's first series policeman. The West books are still perhaps the truest form of the police novel; in this series, dealing with one case at a time, Creasey is nearer the traditional English novelist than most contemporary authors - although one of West's closest challengers in the 'novel of detection' is Creasey's less-known but remarkable Superintendent Folly. Written by 'Jeremy York', these books give the country-house type of murder investigation new horizons in humanity and emotion.

There remains the first ever Creasey series, that of Department Z, with Gordon Craigie leading and guiding a group of patriotic young men in counter-espionage in Great Britain. A constant cry from young readers for 'more about Craigie', and the only effective answer to present the series, revised, in reprints both in paperback and for the library shelves. Revision has in no way detracted from the breath-catching excitement in the original editions. The early ebullience remains, with its own particular fascination.

There have been other pseudonyms, other series. 'Norman Deane', for instance, with his memorable 'Withered Man', wrote powerful wartime spy stories in the forties; one is told through the eyes of a Nazi secret service agent with quite incredible realism. These lay dormant in England until Arrow Books and John Long saw their potential in 1971; in the USA, McKay began to publish them in 1972. Or 'Peter Manton', whose early books were nearly comparable with the Scotland Yard series of Edgar Wallace. Some of the series, or the characters in them, lost their identity in other series characters, and Creasey stopped using the pseudonyms because they simply wouldn't 'grow'.

During his lifetime Creasey grew enormously in stature throughout the world. As reviews of his books in the United States show, he won great prestige (as well as phenomenal sales) in that country. Some are published simultaneously with their British counterpart - as West, Gideon and Cellini. Others were printed from revised editions of British titles first published in Britain in the thirties and forties.

One unique fact emerges from a study of Creasey's books over the years. Most of those originally published earlier than 1953 were thoroughly revised before being reprinted in either paperback or library edition. Asked why he revised on such a scale, Creasey said:

The newer books should be better written than the older ones; to bring out new editions of old titles, knowing them not to be comparable with new titles, cheats not only the readers but me. Everything of mine should be as good as I can possibly make it at the time of publication.

Despite the great span of Creasey's work, there was an underlying theme throughout: his belief that it is mankind's destiny to work together for the common good. It is doubtful whether in the whole history of storytelling such a theme has been so consistently and effectively portrayed, and this is the more remarkable because Creasey's books all deal with various aspects of crime and criminals. A distinguished American critic said:

Future historians of this day and age will need to study these (the Gideon) books if they are to form a true picture.

For nearly 40 years Creasey poured out his stories, presenting a variety of characters, writing from the viewpoint of man and woman with equal verisimilitude, whether through the eyes of criminal or policeman, their families, the young or the old, the rich or the poor, high society or low. Despite his enormous audience in the United States, and his familiarity with that country, he has never told a story through the eyes of an American.

I cannot 'see' as an American sees... Before I can write from any human viewpoint, I have at least to believe that I understand it.

The actual list of Creasey's characters is almost incalculable. He used at least ten central figures in different series, and in each series developed no less than four and sometimes 12 characters who appear in book after book. But except for the Gideon series, he never had an index of characters and characteristics.

They live in my mind... I can see them and hear them much more clearly than most people whom I know in life. Some, like the Toff and the Baron and Gordon Craigie, I've known for nearly 40 years; some, such as Cellini, only for five or six. It never occurs to me that they don't exist.

It is hardly surprising that he had an index of the Gideon characters prepared: there are over 700. Well over a hundred appeared in two or more books. Each is sharply and thoroughly presented and developed. Creasey had a gift for creating a character in a few lines, sometimes even in a few words.

In the whole of his writing life, he never took the sex-and-sadism-school road to mammoth sales. 'I can't write what I can't like', he explained simply. But since 1932 he wrote books which people all over the world, in over a 100 countries and 27 languages, liked more and more.

The author himself said that the most rewarding moment of his writing life came when Anthony Boucher, the distinguished critic of the New York Times, said in his column:

Creasey is creating his own kind of Comedie Humaine-Policière - and a splendid achievement it is.

A few weeks later, writing in MD, the Editor - Felix Marti-Ibanez - said much the same thing:

Creasey's Balzacian 'Human Comedy' is devoted to only one facet of the 20th Century, the rise of violence as a social phenomenon and its detection and punishment... Any future student of 20th Century crime sociology will have to study these literary documents.

Note from Richard Creasey
Click here for the most comprehensive catalogue of my father's work.