Swift Nick Nevison the Highwayman - A Yorkshire Legend Content from the guide to life, the universe and everything 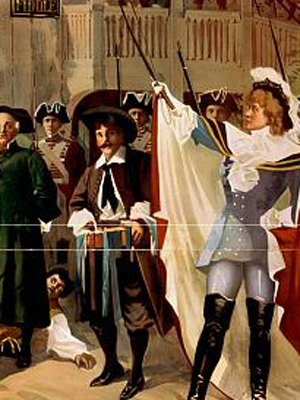 Did you ever hear told of that hero,
Bold Nevison it was his name,
And he rode about like a brave hero,
And by that he gained a great fame.
- from the ballad Bold Nevison1

'Stand and deliver! Your money or your life!' Whether or not these words were usually uttered by highway robbers in 17th- and 18th-Century Britain is in dispute, but the romantic associations of night, fog, danger and the thrill of the chase remain vivid today, and the highwaymen of story and song bring to mind images of derring-do. We expect our historical highwaymen to have been dashing, brave, chivalrous to the ladies, and dedicated to the equitable redistribution of wealth. Sometimes, as in the case of Dick Turpin, whose primary modus operandi was attacking people in their homes, they disappoint. At other times, as in the case of John Nevison, the 17th-Century highwayman dubbed 'Swift Nick' by Charles II himself, they do not.

As might be expected in the case of characters with such a dodgy trade, the facts are often in dispute, and myths and legends abound. In Yorkshire, Nevison's name is so well known that an association with his career can help to sell real estate more than three hundred years after he was hanged at York Castle, and country inns can still attract customers by dropping his name. Though even his first name is in dispute, Nevison enjoys the reputation of having been more like the dashing figure of romance than most of his fellow miscreants - it was in all probability he, and not Turpin, who made the famous ride from Kent to York in a day - and, although he was hanged for murder in the end, it was, in fact, the only one he had committed.

Now when I rode on the highway,
I always had money in store,
And whatever I took from the rich
Why I freely gave it to the poor.
- from the ballad Bold Nevison

Although the term 'highwayman'2 first came into use in 1617, the phenomenon of highway robbery did not become widespread in 17th-Century England until the Civil War. After the execution of Charles I in 1649, large numbers of Royalist soldiers, now rendered homeless and destitute, took to the roads for their livelihood. The dashing costumes and equally dashing reputations of the Cavaliers may have led to the later association of highwaymen with elan and haute couture. The highwayman plied his trade unabated through the 18th Century and into the early 19th, though robberies became less common after 1815. The last recorded mounted robbery in England took place in 1831.

Among the reasons for the decline of the highwayman were better law enforcement, the enclosure of common land, road improvements that left fewer hiding places for would-be ambushers, and an improved banking system that led to less cash being carried about.

During the 18th Century, the highwayman functioned both as travel hazard and figure of popular culture - John Gay's Beggar's Opera, with its highwayman protagonist, ran to a record 62 performances in its first London year alone.

I have never robbed no man of tuppence
And I've never done murder nor killed.
Though guilty I've been all my lifetime
So gentlemen do as you please.
- from the ballad Bold Nevison

John (or James, or William) Nevison was born in 1639 outside Pontefract, near Wakefield, in the Yorkshire West Riding. According to the Newgate Calendar, when he was thirteen or fourteen he ran away from home, apparently after stealing from his own father. After various adventures in London, he arrived in Holland where, having narrowly escaped the law, he joined the Duke of York's army and served with some distinction at the raising of the siege of Dunkirk.

Back in England, Nevison took to the road, and - although he is said to have abandoned stealing for a while to care for his aged father - never really left it. Except for this possible hiatus, and the period between 1676 and 1681, during which he served a sentence of forced labour in the British colony at Tangiers, Nevison rendered the Old North Road unsafe for travellers, and even ventured farther afield, as we shall see.

Nevison had a reputation for gallantry and restraint, and, except for the murder for which he was later hanged, apparently never used violence against his victims. He is famous for two exploits - his faking of his own death from the Plague, and his performance in the famous ride so often misattributed to Dick Turpin, which earned him the nickname bestowed by King Charles II, of 'Swift Nick'.

As the story goes, Nevison was once committed to Leicester Gaol, but escaped by pretending to have contracted the Plague. One of his friends, who was a physician, came and attested to his illness, and another friend, a painter, provided make-up. Nevison feigned death and was carried out of the gaol in a coffin. His subsequent reappearance on the highway was at first taken to be a ghost sighting.

Nevison's other great feat was the famous ride. Early one morning in the summer of 1676, Nevison held up a sailor at Gad's Hill in Kent. Fearing he had been identified, he took a ferry across the Thames Estuary, then galloped to York, 200 miles away, where he arrived at sunset. The Lord Mayor of York happened to be attending a bowls match at the time, so Nevison involved the Lord Mayor in a wager, making sure to mention the day and time. Later, when he was arrested for the Gad's Hill robbery, Nevison was able to call the Lord Mayor as alibi witness, and so went free - although he was caught for another crime the same year and transported for a time to Tangiers3.

In 1684 Nevison was arrested at Sandal Magna, and tried for the murder of a constable, Darcy Fletcher. He was hanged in May of 1684 at York Castle, and his body was buried in an unmarked grave in St Mary's church, Castlegate.

Thus ended Nevison's 'wild career'. But the legend lives on...

Traces of a Legend

The legacy of highwaymen such as Nevison lives on, not only in fiction and song, but in local folk memory. Yorkshire appears to be proud of its famous son the glamorous highwayman, even featuring him in personal appearances by reenactors. His leg-irons, and the chair in which he was sitting (in a drunken stupor, apparently) when he was captured are on display,4 and houses and inns he was known to have sheltered in attract visitors even today.

Other legends attach themselves to Nevison as well. One concerns the magic well at Giggleswick, where a female spirit allegedly gave Nevison a magic bridle which enabled his horse to perform his legendary feats of speed and agility, including leaping prodigious distances. A brewery touts its connection with 'Nevison's Leap' in a highly imaginative bit of poetry.

And there are the ghost sightings, with Swift Nick being spotted - sometimes as a phantom hitchhiker, no less - around Yorkshire, and as far away as Nottingham.

Whatever the facts may have been, Nevison and other highwaymen have left behind a rich folk legacy of local association, and probably enriched estate agents and pub owners for years to come.

1Recorded by Percy Grainger in 1908 from the singing of Joseph Taylor.2A highwayman was a mounted robber. Robbers without horses were called 'footpads'.3By all accounts a hellhole for soldiers and convicts alike. Tangiers had been become the property of Charles II by his marriage to Catherine of Braganza. The colony was held, under more or less constant siege, from 1661 to 1684.4At York Castle and St Helen's Church, Sandal Magna, respectively.