Dmitri Ivanovich Mendeleev - Chemist Content from the guide to life, the universe and everything 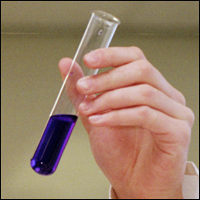 Dmitri Ivanovich Mendeleev was a 19th Century Russian chemist, born in Tobolsk, Siberia, on 7 February, 1834. His most famous contribution to science was his devising of the periodic table of the elements, a task which took up most of his time and energy. However, he did make contributions to other branches of physical chemistry, and advocated the underground gasification of coal.

By the standards which prevailed in Russia during the latter part of the 19th Century, Mendeleev led an unconventional life. During this period Russia was under the reign of Czar Alexander II who, in contrast to his father's iron rule, was more liberal.

The first part of Dmitri's life was characterised by family turmoil. He was the youngest of 11 siblings. His father had been a headteacher but lost his job when he became blind. In order to support her large family, Dmitri's mother, Maria, set up a glass-factory. This burned down in 1848 and soon after Dmitri's father died, leaving the family in a desolate position.

After some years, Dmitri, his mother and his sister Elizabeth moved to St Petersburg in search of a better life. He enrolled in the Faculty of Physics and Maths at the University of St Peterberg in 1850, graduating in 1855. He also studied science in France and Germany and subsequently served as Professor of Chemistry at the St Petersberg Technological Institute between 1864 and 1866. He was instrumental in founding the Russian Chemical Society in 1868.

During his younger years, Dmitri survived several bouts of tuberculosis and both his mother and sister died of tuberculosis almost immediately after he was accepted into university. Dmitri married Feozva Nikichna in 1863 by arrangement of his older sister Olga, a circumstance which he did not really enjoy.

This arranged marriage with Feozva eventually collapsed and, in orthodox Russia, you may divorce - but never marry again, as this would constitute the criminal act of bigamy. Dmitri did however marry again, but this time for love. His wife's maiden name was Anna Ivanovna, and she was to have a deep influence on his life. The Orthodox Church, of course, disapproved of this but fortunately Mendeleev had the support of the Czar who had the last word when he said:

Mendeleev has two wives, yes, but I have only one Mendeleev.

Mendeleev's work gave him a safe haven. Being a brilliant and recognised student and scientist, his work allowed him to travel around Europe, which at that point in time was scientifically flourishing. Back in Russia, Dmitri Mendeleev set out to bring knowledge to the common people and would travel third class around the country to discuss, for example, manuring strategies with the peasants. This contact with the masses was regarded with some suspicion by the authorities but, since he was helping Russia rather than promoting dangerous ideas, (such as democracy), this was deemed to be in order. However, as Mendeleev grew older some of his statements became increasingly more political. Finally he was 'promoted' from professor to Minister of Education - rather a nice way to keep mischief away from the lecture halls!

Mendeleev was known also not to care too much about his personal appearance. There were stories that he would have a haircut and shave only once a year. One eyewitness reported that 'every hair acted separate from the others'. Work obviously came first for Mendeleev.

Although by the mid-1800s several people had made important contributions in the search for patterns among the then known elements, notably Johann Dobereiner and Lothar Meyer in Germany, and John Newlands in England, it is to Dmitri Mendeleev in Russia that the main credit goes. All these protagonists were assisted by the publication in 1860 of more accurate Relative Atomic Masses, or Atomic Weights, as they were then called.

There were two main problems about establishing a pattern for the elements. At the time, only 63 elements were known to Mendeleev and, as a keen player of the card game, patience 1, which involves sorting the cards into suits, Mendeleev had the idea of writing the properties of the elements onto individual cards and organising them into groups. The second problem is that John Newlands, who had also organised the elements according to their Atomic Weights, had been ridiculed as there was an implicit assumption that there were no further elements to be discovered. Yet the preceding few years had seen the discovery of thallium, indium, caesium and rubidium. Thus the discovery of one more would upset the whole system. Indeed the Proceedings of Societies: Chemical Society dated 1 March, 1866 contains the following Minute:

Professor GF FOSTER humorously inquired of Mr Newlands whether he had ever examined the elements according to the order of their initial letters?

Like Newlands, therefore, Mendeleev also organised his cards into order of increasing atomic weight and observed the occurrence of certain regularities. Unlike Newlands however, the genius of Mendeleev was to leave gaps in his table, where he knew elements yet to be discovered should be inserted.

Mendeleev was so confident of his table that he made predictions about the properties of elements which would fill the gaps. Thus, in 1871, he predicted the properties of an element he called eka-silicon, which would fill the gap between silicon and tin. This element was indeed discovered 15 years later in 1886 and given the name germanium. Its properties were found to be in excellent agreement with those predicted by Mendeleev.

Although the Periodic Table of the Elements was one of the most fruitful ideas to come out of scientific research in the 19th Century, Mendeleev was never awarded a Nobel Prize for this work, although he came within one vote of it in 1906. The reason cited is that one member of the awarding committee argued, rather eloquently, that Mendeleev's 1869 work had already been widely accepted as a basic part of chemical knowledge, and had already been put forward by the Italian chemist, Stanislao Cannizzaro.

Dmitri Mendeleev died peacefully during a reading of Jules Verne's Journey to the North Pole, aged 72 on 20 January, 1907. (This was six years after the Nobel Prizes were first awarded).

Since then, eight elements have been discovered and nearly 30 have been made in the laboratory. Mendeleev has the rare distinction of having an element, that with Atomic Number 101 (Mendelevium), named after him. This synthetic element was obtained by Albert Ghiorso, Glenn T Seaborg2 and co-workers between 1955 and 1958.
1This is similar to the computer game, 'solitaire'.2The American physicist, Glenn Seaborg, was also the first person to synthesise the radioactive element, plutonium - in a nuclear reactor, in 1940. The element, seaborgium, is named after him.