The Nautilus - A Creature of the Deep Content from the guide to life, the universe and everything 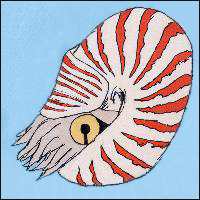 Nautiluses are sea creatures - they are cephalopods, which means they are related to octopuses, squids and cuttlefish. Like these they have soft, squishy bodies and plenty of tentacles. Unlike the others, nautiluses have a hard spiral shell like a snail which protects them from predators.

There are a number of different species of chambered nautilus, the most well-known being Nautilus pompilius. All the species live in the tropical waters of the eastern Indian and western Pacific Oceans, in the deep waters around coral reefs.

Nautiluses have not changed much in the last 500 million years. In times past, they shared the seas with the Earth's dominant lifeform, the ammonites. Ammonites looked similar to nautiluses, with a spiral shell, but were actually more closely related to the modern octopus. Nautiluses are more accurately known as chambered nautiluses, to distinguish them from the argonaut, a rare type of octopus which is also known as the paper nautilus, but we're not going to talk about the paper nautilus here.

The basic shape of a nautilus is a spiral, like a flattened version of the shell of a common garden snail, but with the opening facing upwards. The creature lives in the mouth of the shell. It has a large leathery lid which can be lowered down to cover the shell opening, protecting the animal inside. Normally, however, the lid is raised slightly and the animal's eyes, tentacles and siphon protrude in the gap between the cover and the shell.

The outside of a nautilus' shell is coloured with stripes which act as camouflage. Like fish, dolphins and most other sea creatures, it is darker on the top and lighter on the bottom. The nautilus has two eyes, one on each side of the shell. We'll say more about them later. There are many tentacles, up to 90. Unlike the tentacles of other cephalopods, these do not have suckers. Hidden in the tentacles is its parrot-like bony beak. The siphon is a pipe through which it breathes water. It can direct a jet of water from the siphon to power it along in any direction it likes by jet propulsion. The nautilus has a good sense of smell, which they probably use in hunting.

Nautiluses keep growing until they can no longer catch enough food to feed themselves, and can live for up to 20 years. Specimens as large as 27cm across (nearly a foot) have been recorded, although some species rarely grow to more than half that.

The nautilus' shell is spiral like a snail's shell, but is divided into sealed compartments or chambers. The nautilus lives in only the outermost of these, and the others are filled with gas. There is an organ called the siphuncle which extends into all the chambers and allows the gas to diffuse between the chambers, keeping the pressure the same in them all. The nautilus adjusts the pressure until it is neutrally buoyant - that is, it weighs exactly the same as the water. This means that it neither floats to the surface nor sinks to the bottom. It can then move in any direction including up and down using its jet propulsion.

From the outside, the nautilus' stripes make it spectacular-looking enough, but a cross-section of the shell shows that it is a particularly elegant looking spiral shape - it is a logarithmic spiral, a mathematical function first studied by Sir Isaac Newton. In polar co-ordinates, this has a very simple formula:

where r is the radius, θ is the angle, k is a constant and e is the base of natural logarithms. The logarithmic spiral has the property of self-similarity. If you make it bigger or smaller, the new curve can be superimposed exactly on the original, although you will need to turn it to get it to match. It has to be said that all spiral-shelled molluscs, including garden snails, have shells based on the logarithmic spiral, but the nautilus is a particularly striking example.

The reason the animal uses such a shape is that it continues to grow as long as there enough food. The bigger it gets, the more food it can catch and the faster it grows, so the shell must grow accordingly. It is constantly expanding the shell, and when there is enough room at the entrance, it moves out of the section it is occupying, seals it off with a dividing wall and lives in the outer part.

Although it is often said that the spiral of the nautilus shell is a 'golden spiral' based on Φ (Phi), the Golden Ratio, this is not true.

Most cephalopods, including octopuses, cuttlefish and squids are famous for having eyes which are very similar to those of humans, despite having evolved completely independently. Nautiluses, on the other hand, have eyes which are much simpler, although they have rather poor vision. The pupil in the nautilus eye doesn't just look like a hole, it actually is a hole, and the water in which the creature lives flows in through the hole and fills the eye. There is no lens and no transparent jelly inside the eye. Light is focused onto the retina by the 'pinhole camera' principle: light from one part of the field of view is restricted by the size of the pupil to strike only one part of the retina. But the pupil has to be reasonably big to let enough light in for the nautilus to see, and this means that the image formed is blurred and out of focus. Nautiluses can see rough shapes but would not be able to make out any detail.

The nautilus eye is interesting because it is an intermediate step in the evolution of the advanced eyes of octopuses and humans. The most primitive eyes are just patches of light sensors on the outside of the skin. These can detect light and dark but with no direction. A cavity with the light sensors inside can begin to detect direction. The next stage is the nautilus eye which can detect large shapes but no detail. The final step is the addition of a lens, something that has been done by the other cephalopods to provide clear and detailed vision. Note that at all stages in the development of the advanced eye, the organ is useful to the animal, and the development takes place in small steps. Every step adds to the functionality of the eye, building on what's there already.

Like many animals in the sea, nautiluses are predators, but are themselves preyed upon by others - the trigger-fish and octopus are both capable of breaking or drilling through the shell to eat the animal inside. To protect themselves from these predators, nautiluses hide during the day by going down deep into the ocean. Their shell can withstand the pressure at depths of 800m (2,500 feet). At night they come up towards the surface where the food supply is. They feed on all sorts of smaller creatures that live near the surface of the sea, such as crabs, shrimps and small fish. They only need to feed around once a month because they live in warm seas and expend very little energy. Nautiluses breed by the male using some of its tentacles to transfer sperm to the female, who then lays eggs.

The Name 'Nautilus' and Other Nautiluses

The name Nautilus comes from the Greek word 'nautilos' meaning 'sailor'. Originally the name applied to a different creature, the octopus known as the argonaut or paper nautilus. Two of the tentacles of this creature are flattened into a paddle shape, and it was thought in ancient times that the creature raised these into the air as sails to catch the wind, so they were called 'sailors'. The other notable feature of the paper nautilus is that it makes a delicate spiral shell, not to live in but to lay its eggs in. When the first chambered nautiluses were found, it was assumed they were the same type of creature so the name 'nautilus' was transferred to them.

The name 'Nautilus' has also been given to a number of ships and submarines, both real and fictional, over the years, including one of the very first submarines, a model driven by sail when on the surface; the first nuclear-powered submarine; and the incredible submarine belonging to Captain Nemo in Jules Verne's novel Twenty Thousand Leagues Under the Sea.