Using a Shell to Hear the Sea Content from the guide to life, the universe and everything 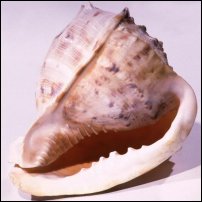 Many people have picked up a seashell, closed their eyes and placed it against their ear to hear the sound of the sea. The gentle splash of wave against shore evokes memories of walking along a beach, the sun setting as a soft sea breeze rustles their hair, bare feet sinking into the sand, a hint of salt and seaweed and fish lingering in their nostrils. A smile plays on their lips, and then they open their eyes and find themselves back in the real world. But are shells actually this magical, able to reproduce the sound of waves when put to the ear - even inspiring poetry:

Gather a shell from the strown beach
And listen at its lips: they sigh
The same desire and mystery,
The echo of the whole sea's speech.
– Dante Gabriel Rossetti, The Sea Limits

...or is it something a little more down-to-earth?

There are various ideas about what actually makes the 'wave' sound when you put a shell to your ear. One suggestion is that you're hearing the echo of your heart beating and the blood rushing around your body, in particular the blood vessels in your ear. But that's simply not true, because if you ran about a lot before putting the shell to your ear there would be a definite difference in the intensity of the 'waves' you hear. Why? Well, exercise of any sort increases you heart rate hence the waves would be louder, or more frequent, in time with the faster beating of your heart.

Another explanation is that the wave sound is created by air flowing through the shell, and this may have a little to do with it as the sound becomes louder when you lift the shell slightly away from your ear. However, if you put your ear to a shell in a soundproof room (where there is no ambient noise, but air is still cycling around the shell), the wave sound is noticeably missing. So, it must have something to do with outside noise.

When you hold up a shell to your ear, you block out direct noise to your ear. However, the shell captures any atmospheric noise, which then resonates inside the shell. This resonating chamber needs some noise to work with, but otherwise works regardless of whether your surroundings are noisy or not. However, it stands to reason that the louder the environment around you, the louder the sound inside the shell - as more sound waves are 'bouncing', for want of a better term, around the chamber. These frequencies are garbled by the walls of the chamber and become like radio static to us, as our ear is not finely tuned enough to distinguish every nuance. Thus you get that shhhhhh sound, like waves breaking on the sea shore.

A Word in Your Shell-Like

So why use a shell to hear the sea? Well, come on now, that's obvious really. Even pre-historic beachcombers delighted in the beauty of shells they found littered upon their coasts, and who doesn't want to be reminded of that in some way? The size and shape of the shell can vary the sound you hear of course, but many argue that the conch shell is the best at getting a 'wave crashing on the shore' effect. Just be wary about how you go about selecting a shell, unlike Larry the Cable Guy:

Down on the beach last year, there was a girl wearing a bikini made from seashells. When I held one up to my ear I could hear her scream.

Fortunately, you don't even need a seashell to hear the wave noise! If you find yourself sans–shell, you can produce the same effect by putting an empty glass, or even cupping your hand, over your ear. Not quite as romantic as picking up a large conch with a gorgeous coloured spiral upon it, putting it to your ear, and letting the waves take you away though - is it?