Accident and Emergency Departments Content from the guide to life, the universe and everything 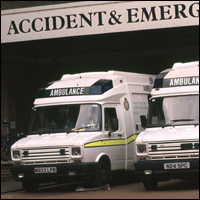 The Accident and Emergency (A+E) department1 is a common fixture in large hospitals and deals with acutely unwell individuals and those who have suffered trauma. Smaller hospitals and those that deal only with outpatients may not have an A+E, but this will be clearly indicated on signs at the hospital entrance. Also, road signs for hospitals with an A+E are red, whereas signs pointing to those without are blue. A+E departments generally operate continuously (24 hours per day throughout the year), though the staff do change on a regular basis.

A+E departments are run by a number of doctors and nurses, each with their own hierarchy. Consultant doctors are responsible for the overall management of patient care, and are supported by registrars (specialists at a lower grade than consultant) and senior house officers (doctors in their second or subsequent years of training after qualification). Meanwhile, a charge nurse is responsible for managing the flow of patients and their prompt monitoring and treatment, with other nurses present being responsible for triaging patients, giving medication and measuring patients' blood pressure, pulse, temperature and so forth. Other staff are also present in A+E, ranging from receptionists and porters to paramedics and doctors from other wards.

Patients arriving via their own transport enter through the main entrance into the waiting room, where they give their details to a receptionist and are added to the computer system. After a wait, the patient is seen in triage to assess whether they require care in majors or minors, following which they typically return to the waiting room. Once a doctor is free to see the patient, the patient is called through to majors or minors and will stay there until they are referred to a hospital ward or discharged. In some cases, a relatively well patient may be moved from majors back to the waiting room once seen in order to free up a bed space.

Patients arriving at A+E by ambulance are brought in through a separate entrance into majors, where the paramedics notify the charge nurse of the patient's arrival. Some treatment and an ECG may have been provided in the ambulance, and details of these along with any history taken by the paramedics are handed over to the A+E staff. The patient is transferred onto a hospital trolley and moved to the dance floor to await being seen by a doctor in majors. In the case of seriously ill patients and those having undergone serious trauma, the ambulance control centre may contact the department several minutes ahead so that the appropriate teams4 can be assembled in resus.

Around 98% of patients attending A+E in the UK are referred to a ward or discharged within four hours of arriving. Those who don't will end up 'breaching'5. That is, they have not received the level of service expected, thus getting the department into trouble. From the patient's point of view, it may seem that the patient is being labelled when it is the doctors who are failing to see them in time. Unfortunately, the A+E staff don't actually sit behind a desk with a watch, relaxing until the four hours are nearly up – they often have to work at full tilt to ensure that every patient is offloaded elsewhere within the time limit. Tests usually need to be performed, either to determine whether the patient needs admitting or as a prerequisite to referring them to a ward. Blood results take time to be processed, patients have to queue to have X-rays performed next door in the radiology department, and nurses can only perform blood pressure checks and ECGs so quickly. Furthermore, once an A+E becomes really busy, the wards accepting patients will also become busy, and the A+E doctor may struggle to get hold of the ward doctor in order to make the referral. In difficult conditions wards can run out of spare beds, as can the A+E, and the resultant backlog can result in patients breaching despite the best efforts of all concerned.

The number of cases seen in A+E varies according to the time of day, with a peak in the late afternoon and the least busy time in the early hours of the morning. The late afternoon peak may be due to various factors including the mass movement of people in the post-work rush hour leading to a rise in trauma cases, and a lull in daytime television leading to an onslaught of non-urgent complaints. Friday nights are especially busy in central locations as people intoxicate themselves and do a variety of very silly things.

The mixture of cases seen in A+E ranges from serious trauma and cardiac arrest to cases of chest pain, abdominal pain, difficulty in breathing, bleeding, fitting, drug overdose, collapse, falls, fractures, unwell children, various forms of accidental and deliberate damage to various parts of the body, and just about anything else you can think of. It is thus a good place for medical students to practise taking a medical history and examining patients, and patients attending an A+E at a teaching hospital may well be seen by a student who will then present their case to one of the doctors.

Naturally, if it isn't an emergency, patients may be better off going straight to their own GP or, in the case of dental problems, their dentist. If you have something really minor, you could also try talking to your local pharmacist. For those with minor injuries, there are NHS walk-in centres staffed by nurses trained to deal with nasty cuts and scrapes, who will refer patients to the A+E if they suspect an underlying fracture or similar. Out-of-hours GP services exist to cover local areas and can visit ill patients at home and decide whether they need to go to A+E. Out-of-hours dental clinics also exist in some parts, allowing patients with urgent dental problems to avoid taking up room in A+E.

There's also NHS Direct, a phone and web service that allows patients to find out whether they're unwell or not by asking them whether they have any symptoms. If there is anything wrong with them, patients are told to call an ambulance, which will take them to A+E.

1Also known as the emergency department (ED), 'casualty' or the emergency room (ER) in the USA.2Electrocardiogram – a visual representation of the electrical activity of the heart or, in lay terms, something similar to the thing that goes 'beep' on TV shows.3A small piece of plastic that sits in a vein and can be used to give drugs and fluids via a 'drip'.4Orthopaedics for trauma, paediatrics for children, and so forth.5Wags may point out that to 'breach' means to successfully force one's way through the fortifications, something that these patients have failed to do.