How to Take an Inpatient History (UK) Content from the guide to life, the universe and everything 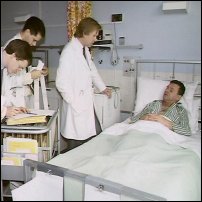 It is a common perception that medical students learn by being taught. This isn't entirely true, and in some cases is merely a lie perpetuated by hospitals to ensure that the extra funding associated with teaching keeps on pouring in. In fact, medical students learn by 'clerking', a lengthy process that involves taking a detailed history from a patient and then, when they're starting to get particularly fed up, performing a rigorous examination of any body parts they're willing to let you touch. This entry deals with the history part of a full inpatient clerking.

Ever since doctors started getting sued for making mistakes, they have been forced to document absolutely everything in their patients' notes, and this practice extends to students. Fortunately, by doing so, the history and examination taken are extensive and thorough, thus making a diagnostic error less likely. While there are many variations, the common themes found in all good medical histories are:

This may seem obvious, but if you don't ask the patient their name, age, left/right handedness, occupation, marital status and ethnicity at the start of the interview, you probably never will. This can be especially embarrassing if you later discover that your patient's name is Napoleon.

This is the headline news of the history and should consist of the most important symptom(s) the patient complained of along with their duration in hours, days, weeks etc1. Thus, you might write 'PC: crushing chest pain of 3 hour's duration', but you wouldn't write 'PC: heart attack'. If there is more than one important symptom, write them in a numbered list.

Having drawn out the vital points, it's now time to fill in all the details. Start with the first symptom from the presenting complaint and ask every relevant question about it, then do the same for every other symptom the patient has given you. The questions that need asking vary depending on the symptom, but the example of pain is common enough that it deserves to be dealt with here.

There are many other symptoms, each with its own set of questions. However, when a person with a problem relating to their gut comes along, you should enquire about any other GI symptoms by running through the appropriate part of the systemic review (see below). This is a good way to ensure you don't miss anything.

Having got the meat of the HPC, it is a good idea to cover the risk factors for any disease you suspect the patient to have. For instance, a patient likely to have had a heart attack should be asked about their weight, diet, exercise regime, blood pressure, cholesterol levels, whether there is a family history of heart problems, and whether they have diabetes3. If the patient is elderly and has had a fall, the risk factors for falling should also be explored.

Finally, you should enquire about the patient's progress since admission, if you haven't already. This consists of three parts: any changes in the symptoms, any investigations performed, and any treatments the patient has been given. In elderly patients, any change in the ability to perform activities of daily living (ADLs) such as walking, washing, dressing, and feeding should also be enquired after.

As well as any past and present diseases, especially those resulting in a hospital admission, the patient should be asked directly about MI (heart attack), jaundice, tuberculosis, hypertension (raised blood pressure), rheumatic fever, epilepsy, asthma, diabetes mellitus and stroke. The mnemonic for this is 'M J Threads'.

Having done this, you can then continue to ask the patient about the drugs they usually take and those which are being administered to them while they are in hospital. The route of administration and dosage should be noted along with the frequency with which the drug is taken. The following notations are used:

Micrograms, international units, intrathecal/spinal injections and frequencies of less than once a day are all best written out in full, as abbreviation can lead to confusion.

It is a good idea to ask the patient if they are taking any over-the-counter drugs or herbal medications as these can also have a bearing on the diagnosis.

An enquiry should be made as to whether any of the patient's first-degree relatives (parents, grandparents, siblings, children) have had any major disease, or whether they are simply alive and well. In the case of dead relatives, the cause of death and age at the time should also be sought. A family history of disease relevant to the patient's own likely diagnosis is particularly useful.

The social history consists partly of accusing the patient of smoking like a chimney, drinking like a fish and taking a range of illicit substances, and so could hardly be described as being 'social'. Alcohol intake should be considered in units4, and the patient should be asked when they started and/or gave up smoking, with the amount being expressed in pack-years5. It is useful to ask the patient what it is they tend to drink, and whether they smoke filter cigarettes, roll-ups or a pipe.

The remainder of the social history is concerned with the patient's dwelling, who they live with/care for/are cared for by, whether they have stairs at home, and whether they have any home help or home care. The patient's ideas, concerns and expectations (ICE) can also be included in the social history, although there is the tendency just to scribble down that the patient is in a bad mood because of the hospital food.

The systemic review is a phenomenon found predominantly in medical student clerkings, as it is used to ensure that nothing has been missed. Each system of the body is considered in turn, with the following being asked about:

The above is only a quick summary of the method used by medical students in the UK to take a history. Knowing which questions to ask requires a detailed knowledge of the possible diagnoses, and it is particularly telling that doctors are able to take histories a lot quicker than students who have just been released onto the wards. That knowledge is also required to make the diagnosis, which apparently can be made from the history alone in 90% of cases, with the remaining 10% requiring at least an examination as well. Whatever the case, a thorough examination should follow the history, either to confirm suspicions or to provide further clues as to what is wrong. One other important thing to mention is that a reasonable set of communication skills won't go amiss - being polite and tactful and treating the patient like a human being will certainly go a long way, but being able to understand the patient's feelings and empathise with them is a vital skill that all medical students must learn somewhere along the line.

1Durations are written as fractions: days are recorded as a number over a seven (three days -> 3/7), while weeks and months use 52 and 12 respectively (ten weeks -> 10/52, five months -> 5/12).2A sieve is a list of questions or causes used by medics to ensure they haven't missed something important.3Age and male gender are also risk factors for heart attack.4One unit can be found in a small glass of wine or a single shot of spirit, while 2-3 units appear in doubles, pints of beer and more generous servings of wine.5One pack-year equals twenty cigarettes per day for a year. A person who has smoked ten cigarettes per day for forty years would thus have a twenty pack-year history.6Pain in the leg brought on by walking and relieved by rest.7Shortness of breath on lying flat.8Shortness of breath while lying flat at night.9Underneath their head, of course - this question relates to PND, but is a good point in the discussion at which to enquire sympathetically about other sleeping problems.10The sensation that further stools need to be passed after emptying has been completed.