American Crows Content from the guide to life, the universe and everything 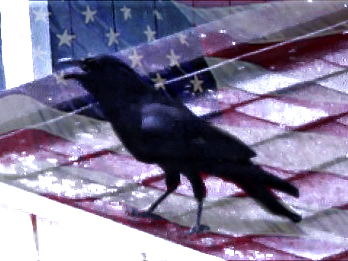 Our feathered friends of the family Corvidae are often looked down upon as annoying pests that don't deserve to live. It's easy to see why - this family includes such birds as blue jays (notorious for bullying other birds), magpies and ravens. It doesn't help that the sounds typically made by these powerful birds are harsh 'caws'. They'll also eat anything they can get to stay alive (and so too would a human in its native environment) and this causes the growers of small fruits and vegetables to put these birds on their hit list.

However, there's at least one of these birds that isn't so bad, and although it isn't perfect, it doesn't necessarily deserve some of the distaste it attracts. If you haven't guessed by now, the bird is the American crow1, and there are many reasons why these ebony avians deserve a little more respect and appreciation.

We human beings are generally guilty of judging things by outward looks before looking at inner beauty, so let's get the American crow's appearance out of the way first. As anyone can tell you, you can't go wrong with basic black, and the Crow has had that wardrobe mastered for a while now. If you take note of how a crow's feathers look in daylight, you'll notice something peculiar and very beautiful; the very glossy feathers shimmer with a 'royal purple' colour in strong sunlight - this is called iridescence. It's interesting to see, and it's especially beautiful if you see their feathers shimmer while they're in mid-flight.

Watching a crow fly is very rewarding, and words can't really do it justice. These large, muscular birds fly exactly like hawks and eagles, by gliding along on the breeze with their broad, lofty wings. If you like watching the bald eagle in flight, you're guaranteed to find pleasure in a crow in flight.

It may sound surprising, but a crow's voice isn't quite as grating as you may think - not that you should expect to fall peacefully asleep to the melody of a crow's lullaby. Compared to the other birds of the same family (excluding the gray jay), a crow's voice is relatively expressive. If you hear a harsh and flat 'kaark' sound, you're not hearing a crow, but a raven. Ravens are generally bigger (except for the white-necked raven which is the same size and looks the same except, well, it has a white neck) and their feathers are ruffled and shaggy, whereas a crow's are smooth and sleek. Let's just say that a raven's almost metallic screech can pull anyone out of any sedative, no matter how powerful. A crow's voice isn't necessarily nice, but it's just a moderately loud 'caw', which isn't that annoying unless you have about 15 of them around you, or one just sits outside your window and refuses to shut up!

What's especially alluring about crows is their personality. Crows are very intelligent, and one of the most sociable birds around, providing ornithologists and scientists with a rich variety of interesting behaviour to observe. There appears to be some form of primitive communication system (somewhere between a household animal and a dolphin in complexity) and those calls you hear are them communicating with each other. Like many scavengers, they also have a superb learning ability which they use to find new ways to get food.

1Other great American Crows are the Black Crowes, a genuine, rockin' outfit from Georgia who have released six studio albums to date. Fronted by pot-tokin' soul merchant, Chris Robinson.